The death has occurred of former Lifford school teacher and headmaster, Danny Coyle.

Late of Townparks, Lifford, and formerly of Falcarragh, the late Mr Coyle passed away in St Vincent’s University Hospital, Dublin, on Thursday.

One of many tributes paid to him described him as ‘a great teacher and headmaster.’ 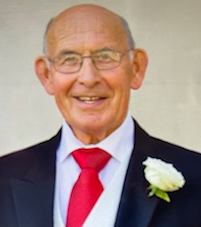 Predeceased by his beloved wife Thelma, his sister Molly and brother Charlie and his parents, Donall and Sofia.

He will be deeply missed by his children Jacqueline, Siobhan, Donal, Anne, Gillian and Paul and his adored six grandchildren, extended family, neighbours and friends.

Reposing at his home in Lifford from 3pm today, with removal at 5.30pm to St. Patrick’s Church, Murlog, for Vigil Mass at 6.30pm.

Funeral Mass will take place tomorrow at 11am, with burial immediately afterwards in the adjoining cemetery. The Requiem Mass can be viewed live via the Parish Webcam https://clonleighparish.com/webcam-watch-live/

Messages of comfort and sympathy for the family may be placed in the ‘Condolence` section of www.rip.ie