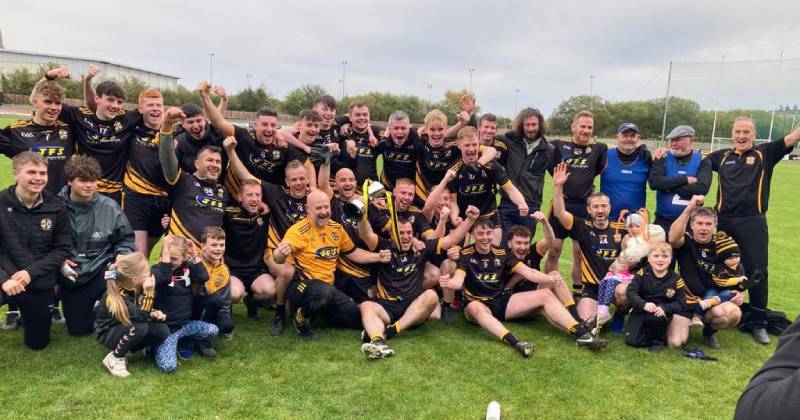 Murrin and Nesbitt combine to secure Junior B for Naomh Ultan

Darragh Murrin and Adrian Nesbitt were on terrific form for Naomh Ultan who won the Junior B Championship with a three point win over Letterkenny Gaels.

Murrin was voted man of the match as he scored 1-5, while Nesbitt scored the other 2-1 for the Dunkineely men, with Murrin at the fore for the first Nesbitt goal.

With Naomh Ultan five points up at half-time, Letterkenny Gaels hit back and scored five points without reply to level at 2-5 to 0-11 but a Murrin free followed by the decisive Nesbitt goal in the 60th minute decided the game.

Naomh Ultan came out flying with a point from Adrian Nesbitt just thirty seconds in but two points in two minutes from Cormac Doherty saw Gaels go ahead.

A quick attack with James Byrne and Darragh Murrin at the fore saw the latter play in Nesbitt who fired into the net, 1-1 to 0-2.

But Gaels would again go ahead with three quick points from Brendan O’Brien, Aidan Hanley and Darren Ferry while Shane Gildea in the Gaels net made a brilliant save to deny Murrin.

However, the next 15 minutes of the game were dominated by the Dunkineely men, Darragh Murrin especially who scored 1-3 in a three minute period.

Murrin pointed from a free before a great score from play seconds later as Naomh Ultan won the kick out.

They did the same again and Murrin raced through, firing into the bottom corner, before he scored another great free.

Murrin then tapped over an easy free while Darren Ferry pointed from play just before the break to give Gaels their first score in 17 minutes, 2-5 to 0-6 at half-time.

But Naomh Ultan allowed Gaels back into the game as two quick points from Joe Friel and Charlie Creevy, followed by three points in three minutes from Brendan O’Brien with Matthew Winters pointing either side of his scores levelled the game at 2-5 to 0-11.

Gaels looked to continue their second half dominance but couldn’t get the score to go ahead, as Murrin again got a well needed point, Naomh Ultan’s first of the half after 25 minutes.

And in the last minute of normal time Naomh Ultan got the decisive score as a long ball into the square which looked to be dealt with by the Letterkenny side was picked up by Adrian Nesbitt and he fired into the net for his second goal of the game.

Cormac Doherty got a late point for Gaels but they couldn’t find the goal to level the game up as Noamh Ultan would win their first Junior B since 2013 by a score of 3-6 to 0-12.

Murrin and Nesbitt combine to secure Junior B for Naomh Ultan was last modified: October 16th, 2022 by Dáire Bonnar
FacebookTweetLinkedInPrint