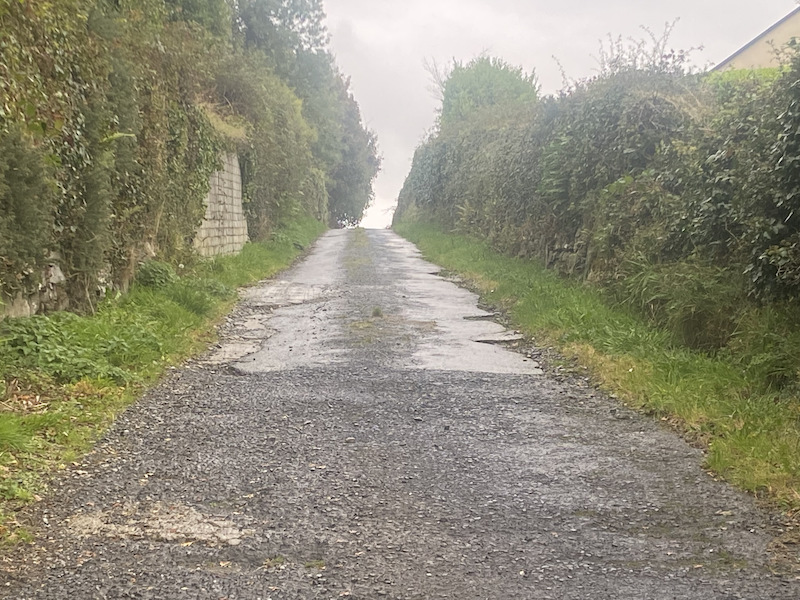 When old Letterkenny was our Emmerdale Farm

The high ditched laneway is still there and the view across to Kirkstown is much the same but everything else has moved on.

It was on our TV screens in the late 1970’s set in a farmhouse in England, but growing up in Donegal or any of the border counties along Northern Ireland we were the first to see life in Annie Sugden’s farmhouse, the original Emmerdale Farm.

We could get ITV also known as UTV and some even called it ‘New TV’ and BBC from Northern Ireland transmitters. Emmerdale was a TV series which our family regularly watched growing up and living on the edge of Letterkenny in Glencar. In those years it was all farms on the verge of the town. It’s 50 years since Emmerdale started and recently they showed a few earlier editions from the 1970’s it rekindled memories of push button televisions in Wolfe Tone Place. And their farms were how they imagined them, a mixture of Emmerdale and RTE’s Glenroe. Now with the benefit of the web it’s easy to look at the backstory that they created for each of the original stars of Emmerdale.

People like Annie Sugden and her father Sam Pearson, Amos and Mr. Wilks in the Woolpack. Annie’s sons Joe and Jack along with Matt and his wife Dolly became household names in the late seventies.

Today’s Emmerdale is a bit over run with the latest Range Rovers and sports cars that you never would imagine on country roads. Back in the early days it was more realistic old battered Land Rovers, a tractor sitting on a hill outside the Emmerdale farm house which handy for when it wouldn’t start.

The old farms above Wolfe Tone Place included Packie Kelly’s who was also our milkman whose home was called Glencar House. I remember my father sending me up to Packie Kelly’s with a trolly that I had and used to carry down a bale of straw, which we brought down to make bedding for a new dog that we had. You could call it my first road trip!

And I remember Packie’s wife Alice securing the bale to the trolly with bailing twine so it wouldn’t fall off going down the lane. I remember the builders calling down to me from scaffolding offering to buy the straw from me. They were working at the first of the then new council houses called Glencar on the very first phase of what was to become Dr. McGinley Road. 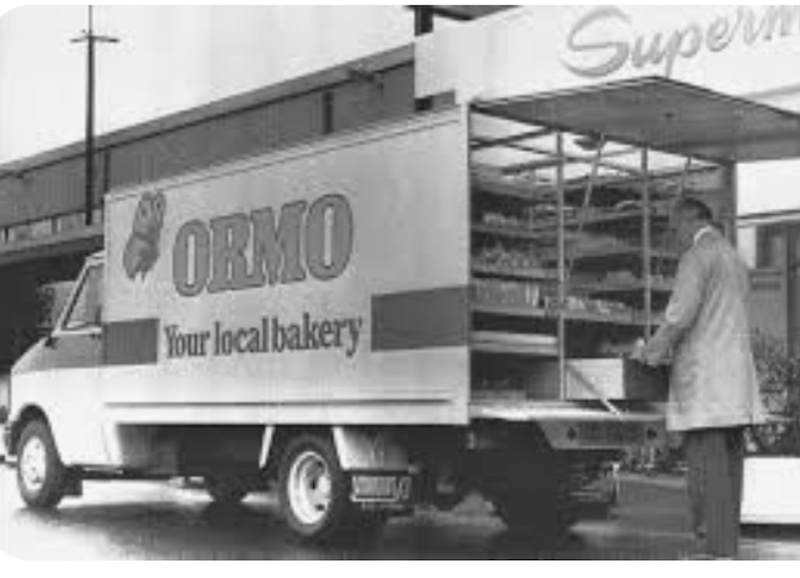 The old Ormo logo and the cream shop coat part and parcel of the days on the road selling Ormon Bread around Co Donegal.

William Harris’ farm was above that further up the hill looking out over Letterkenny. Willie Harris also worked in Oatfield Sweet Factory, so he was also known as Sweetie Harris. There were many journeys made through his fields on the way to the town dump which was at the very top of the hill and what seemed to us as at least a hundred miles from the edge of the town!

The main thing that you were always on the lookout on trip to the dump was pram wheels to make trolleys with but many’s the thing was carried down for that dump, things like rolls of stickers for shops that might have had a miss print on them, then the next day at school everyone would be running around with them stuck to the copybook like the way people would put a sticker on the rear bumper when the had travelled overseas. Ours could have been stickers from sweet boxes or anything, but what they were was bragging rights to tell everyone of your big journey to the town dump!

There was another farm in the Glencar Scotch town land also Harris his name was Solomon, and like Dr. McGinley had a housing development named after him. Dr Mc Ginley lived on the New Line Road and along with being the main doctor in the town in his day and also was a great surgeon.

Solomon today is better known as the vast housing development built on his old farm. I remember it when it was all fields with big high ditches perfectly kept on the road up to his farm house. In the early eighties Harris was one of my customers, as a bread man. I went to them on a Saturday, my last call of the weekend. They always got the same order with some minor adjustments. 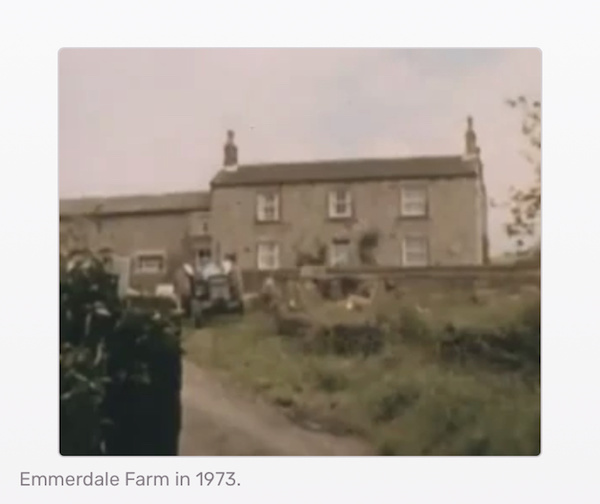 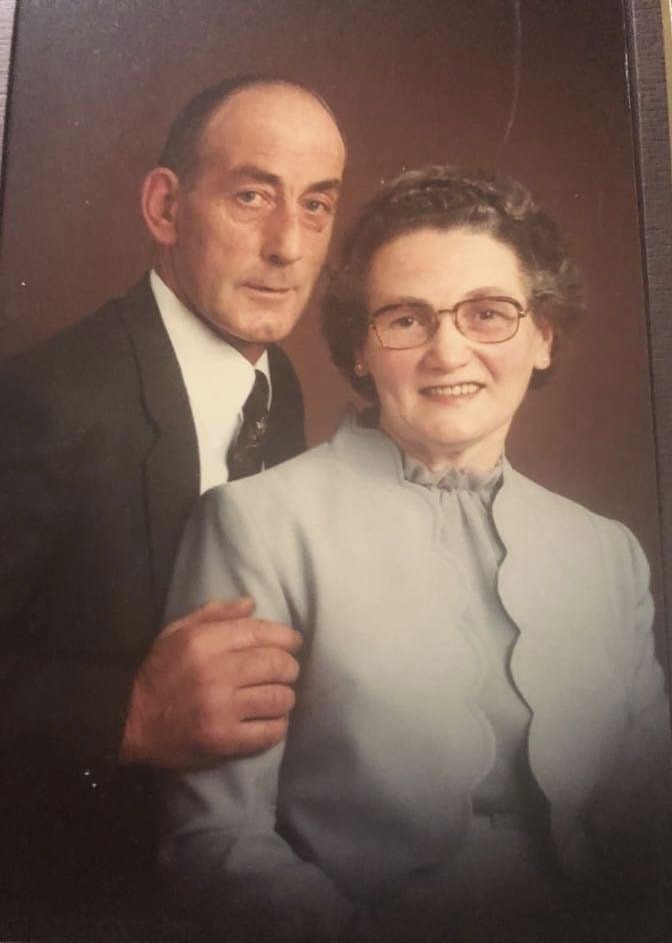 As time went on they would invite me in for a cuppa every Saturday and as well as delivering bread baked in Belfast, like potato bread and wee Suffolk Loaf. We also had a wee chat about the week that had passed. Solomon’s mother who I always knew as Mrs Harris made butter which was the finest. Solomon’s wife Delia was a school teacher and principal in Robinson Hall and later in Ballyraine.

Myself and Solomon should sit at the kitchen table having a yarn, and Mrs Harris would sit by the range joining in the conversation every so often , then I would see here searching through a drawer for a paper bag which she would put a carefully wrapped rounded square of butter in grease proof paper that she had made in her butter churn. which she would tell me to take home with me. Harris’s were just one of the farm yards that call to on the bread run to deliver their bread where farming was so important, It was in those years on the road that I realised how well Emmerdale the TV series was written, where you met so many people that resembled the stars of the soap. What I liked about the early episodes was that there were a lot of outside scenes shot at night time in dark wet or cold evenings in winter, which seemed very like the dark wet and cold winters on the road with the bread van, in these autumn months as the leaves start to fall and evening grow darker you and drive along a road way and it reminds you of driving the same stretch of road many years ago but now the landscape has changed so much. 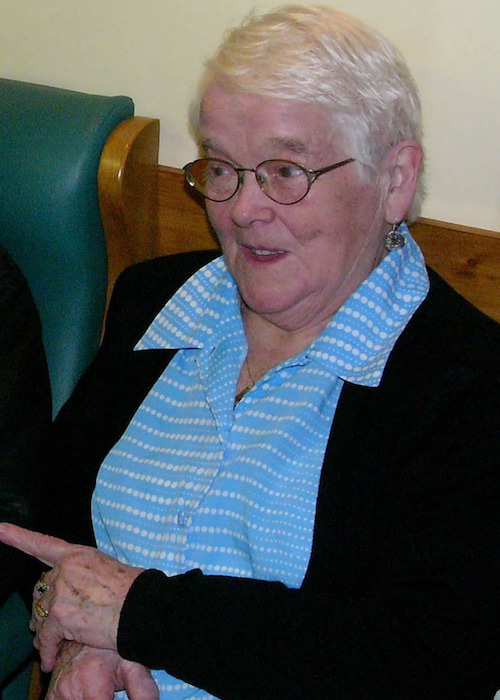 The late Alice Kelly, Packie Kelly wife who lived in Glencar House on their farm in Letterkenny. Photo Brian McDaid.

Some of my calls were to houses that weren’t farm houses but in them there were a few generations of the same family living there and a granny would come out to buy the same brand of bread that she might have travelled across the border into Strabane to buy on a shopping day in her younger years. It was much more chatting than buying or selling bread. One house where the mother had passed away year before and her only remaining son lived with her had a shopping basket suspended in a nearby shed which I would leave a unsliced plain loaf and his favourite Ormo Apple Pie in the event that he was out working in the fields or away at the Mart when I would call and he would miss me.

The present day Emmerdale may have look a lot different from the original. The Woolpack looks the same from the outside but the old Emmerdale farmhouse where the story started is long gone and its big kitchen table where the life in Emmerdale and events recorded in their local newspaper the Hotten Courier where discussed.

The laneway is still in place up to where once Solomon Harris farmhouse stood but the farm house is gone as are all the people I got to know who live there in the eighties.

My own house is built on Sweetie Harris farm as the town engulfs these treasured memories of Donegal’s version of Emmerdale in years gone by. 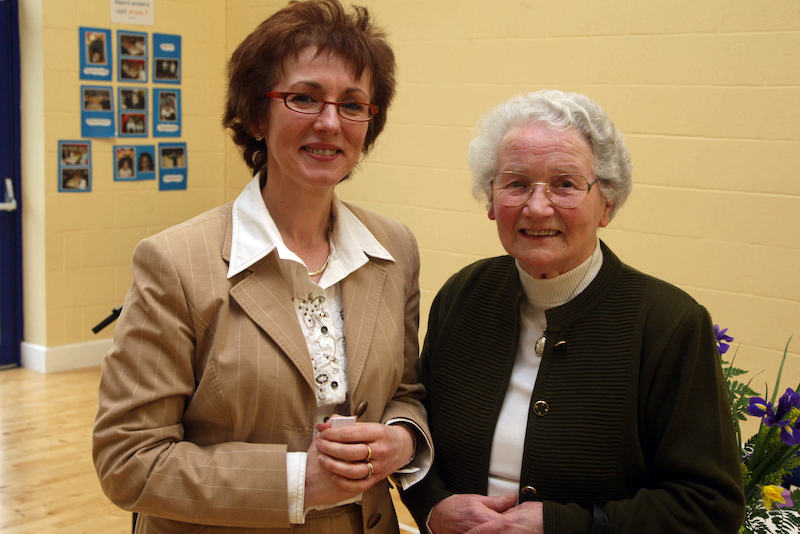 When old Letterkenny was our Emmerdale Farm was last modified: October 19th, 2022 by Brian McDaid
FacebookTweetLinkedInPrint