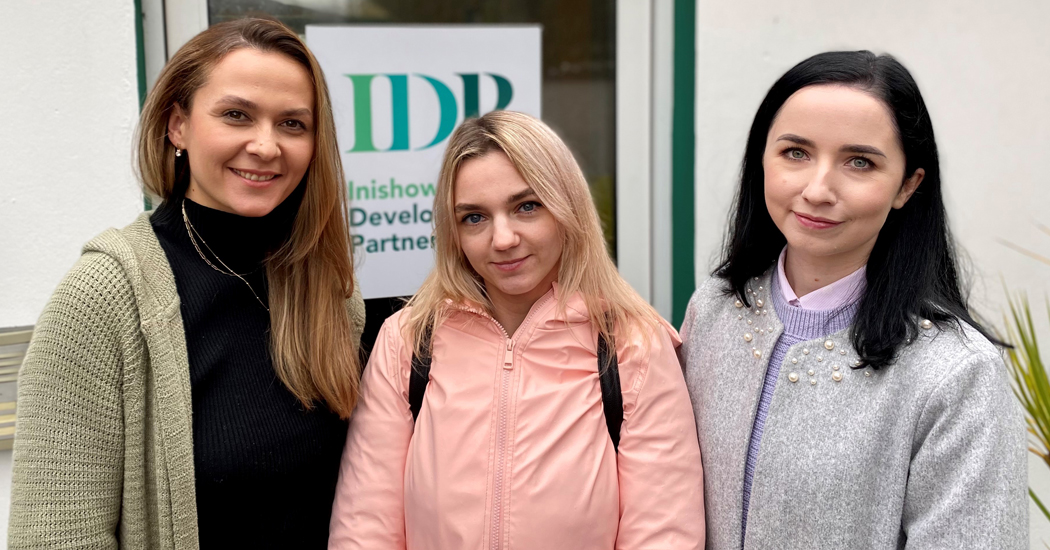 ‘We didn’t want to leave Ukraine, but now we want to give back to Inishowen’

Three new Ukrainian Support Workers in Inishowen want to do everything they can to help not only their people – but also the local community and families.

Alina Edel, Olena Dzhos and Olha Kysliuk are Inishowen Development Partnership’s newest staff members and unlike other staff at the community development organisation Alina, Olena and Olha are all described as being ‘people who fled conflict’ after they arrived in Inishowen around six months ago from their native Ukraine.

The three women arrived separately in Inishowen last April and May and now they are employed by IDP to help support other Ukrainian arrivals as they arrive in the country and help them in their journey towards independence.

Alina came from a small town near Kyiv. She provides support to the Ukrainian population living in the Malin and Carndonagh areas primarily, from her base at the Colgan Hall.

Olha, who has been living in Moville Hostel since May, has a central base in Moville Family Resource Centre, while Olena, who lives in Buncrana works from the IDP office at St. Mary’s Road.

The Support Workers provide translation services as well as employment and CV support for Ukrainians. Alina has also teamed up with IDP Enterprise officer, Sinead McDaid, to run the popular Start Your Own Business course for Ukrainian nationals in Carndonagh next month.

“We have a lot of talented successful business people in the Ukrainian population – they just need a little help and guidance,” explained Alina. “I think these things will be key for independence as well as helping the local economy”, added.

However it is not just the Ukrainian people that the three women want to help. They are very keen to do their part and give back to the Inishowen people while they are here.

“We are aware of the problems that are facing everyone in Inishowen, not just Ukrainians,” explained Alina.

“We know about the mica crisis and the pressures of the cost of living. We want to be able to help everyone in Inishowen and give back to the people after they showed us such empathy and kindness when we arrived” she said.

“Shortly after we arrived, I attended the volunteer fair in the Colgan Hall and I met a local woman called Carmel Doherty – she organised a lot of help and support for Ukrainian people and set up English classes for us. “She organised activities for us and helped us to get involved in sports groups/hobbies. She is the heart of the Carndonagh volunteer scene – she is a beautiful lady.”

While most of the support is hugely positive, IDP is aware that there are some negative perceptions out there, and this has been felt by staff members as well.  It’s important that people understand that the challenges of housing are faced by many families, especially with the MICA crisis in Donegal.

“We are running a charity shop in Carndonagh and people are so supportive and have dropped in to chat and connect.  But we received some negative comments on Facebook – the general idea was ‘what about us?’,” explained Alina.

“We know it is a big issue but the Ukrainian people are not guilty here. We didn’t want this war and we didn’t want to leave our homes – but now we are in this situation.

“I know the government has spent a lot of money – but hopefully as we become more independent, we will need less support from government and be able to contribute to the local economy.

Olena also explained how they have also had reports from parents that some Ukrainian children are taking up too much teacher time in the classroom and their children are missing out.

Where as for Olha she is finding it difficult trying to explain the situation to her children.

“My kids are constantly asking to see Granny and asking when are they going home – they don’t understand why we are here it is very hard to explain it to them,” added Olha.

The thought of home is a constant worry and stress facing our new Ukrainian population and IDP’s support workers are no exception.

‘I cannot turn off the red alerts’

Russia’s renewed bombing campaign of parts of Kyiv and other areas, including those far from the front line and civilian areas have hit home for Alina, Olena and Olha.

“Things can change in an instant,” explained Alina. “I thought my parents were in a safer area in a small town outside Kyiv but anything can happen any moment. You just never know. We just have to hope that everyone will be ok – my parents told me to turn off the red alert texts but I cannot.

“I am very stressed all the time but now that I am working in IDP and helping other Ukrainian people I am starting to feel better.”

Olena believes that it will help the Ukrainian people to keep busy to stop from reading and watching the news constantly.

“We have a lot of people who were in Mariupol and were under constant shelling. We have one family who were living on occupied territory before they got out and they were denied food,” explained Olena.

“But a lot of us are not ready to talk about it yet.”

Alina explained that one family living in the Carndonagh area were living in a town in Eastern Ukraine that was under constant shelling.

“They were very successful businesspeople but the Russians just came in and took their businesses – they were very, very stressed when they first came. But they began working in our charity shop in Carndonagh and that helped them a lot.”

For now the Support Workers are doing everything they can to help the Ukrainian people as well as trying to integrate them into the Inishowen community.

“I am glad to be in this job and be able to help the Ukrainian people when they first arrive in Ireland,” says Olha.

“When I arrived the support from the local community was great, but with language barriers there were no people we could ask to explain forms.  But now we are here to help with application forms, preschool, school and try to support them into employment. I am there to take their hand and tell them this is the shop, this is the school and I can help with translations and to share information in general.”

“We want to do everything we can to help our people but we also want to express our gratitude to the people of Inishowen,” explained Olena.

“We have educated and skilled people here and we can use those skills to improve this community. We are learning about how strong the sense of community is here and we want our people to get involved also.”

As well as employing the three support workers, as part of their Ukrainian Response funded through the Social Inclusion Community Activation Programme (SICAP), IDP are currently supporting community groups in Inishowen who are providing supports for Ukrainians to aid in their transition as well as integrating them into our Inishowen communities.

IDP has seen first-hand the positive response from communities across the peninsula.

As Joint CEO Shauna McClenaghan acknowledges, “From the first support hub in Malin that led the way to the community groups and hubs that are supporting Ukrainians and building friendships in Ballyliffin, Clonmany, Moville, Carndonagh, Muff, Buncrana, Burnfoot, and elsewhere, this small grant programme is about recognising and supporting that effort.

“We’re proud of the connections and compassion that has been shown across the community, voluntary, and statutory sectors.”

Community groups are now invited to apply for small grants support before 28 October, with further details and application forms available via www.inishowen.ie

‘We didn’t want to leave Ukraine, but now we want to give back to Inishowen’ was last modified: October 24th, 2022 by Staff Writer
FacebookTweetLinkedInPrint