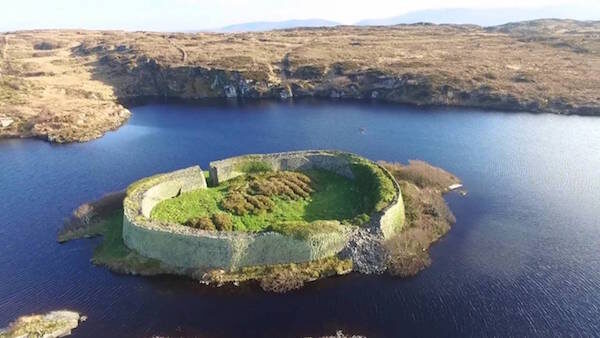 The oval, stone structure is located on a tiny island in the middle of a lough near Narin, outside the picturesque village of Ardara.

This well-preserved but partially reconstructed cashel takes up almost the entire area of the island on Loughadoon.

According to the National Monuments Service, it consists of an oval area enclosed by a massive stone fortification averaging 4m wide at the base and 4.8m in height externally.

The site is a large drystone fort, similar to the Grianán of Aileach, and is likely to date to the early medieval period predating its association with the O’Boyle family.

Architecturally, Doon Fort is a cashel-ringfort: a type of monument which was built in significant numbers in Ireland after 550AD.

In 2021 the Community Monuments Fund Department supported the essential assessments and preparatory works required for repair of a section of the cashel wall.

Additional support through the Community Monuments Fund was secured in 2022 by the Ardara GAP Heritage and History Group on behalf of the very supportive landowner to continue the project and address what appears to be a 1950s repair.

It is planned that the breach can be successfully repaired in 2022 and that this work will allow the walls of Doon Fort to withstand the pressures of time and climate change.

Similar large prominent stone forts along the Atlantic seaboard, from Grianán Aileach in Inishowen to Staigue in Co. Kerry, may be a distinct sub-set of cashels.

Many of these are multi-period sites whose surviving remains represent phases of re-modelling and re-building over a long period of time.

These large substantial sites are also considered to be the residence of a local king or chief.