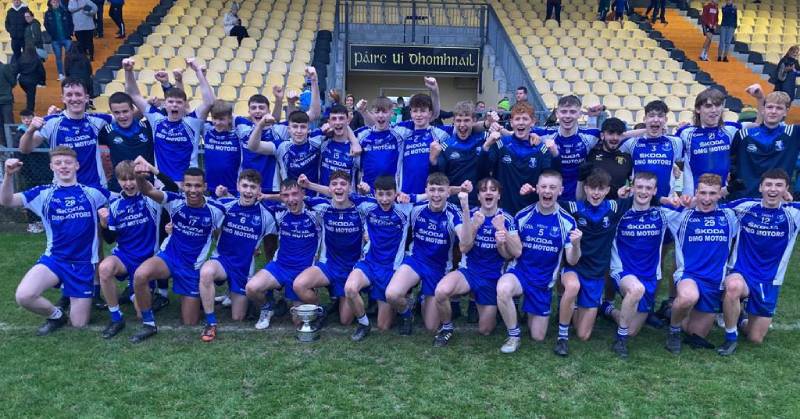 Four Masters took the win in the Minor Championship final after a brilliant second half performance with Kevin Muldoon and Conor Meehan standing out.

The sides were level at half-time but Muldoon took the game by the scruff of the neck and scored a brilliant solo goal before a similar jinking run saw him find Conor McCahill who punched in.

Glenswilly only got two scores in the second half, one coming from the penalty spot through Donal Gallagher, as the Donegal Town men were full value for their win, helped by some great scoring from Conor Meehan.

They started bright too with McCahill getting the first score of the game before four quality scores from Meehan, two from play.

That only had them two points up however as Shane Tinney found the top corner from a free from 40 metres, and an advanced mark from Oisin McGrenra and a point from Daithi Gildea left it 1-2 to 0-5 after 20 minutes.

Glenswilly would then go into a three point lead as Eoghan Scott pointed from the right and Gildea fisted over, while Tinney pointed from a free.

But the sides went in level at 1-5 apiece when a good turn of pace from Ruairi McLaughlin gave him space and time and he fired into the net.

But the second half would be dominated by Four Masters and Muldoon, who came to life after the break.

Meehan got his fifth point when he capitalised on a wayward kick out and two quick-fire goals had the Donegal Town men on their way to victory.

Muldoon first bursted down the left hand side and exchanged a quick 1-2 with Caolan Sweeney before firing into the far corner.

And two minutes later in similar fashion, he came in from the left and turned inside and out before laying it up for McCahill to punch into the net.

Muldoon pointed from play as Four Masters went eight points up before Glenswilly registered a score.

And that would come midway through the half when Donal Gallagher fired a penalty straight down the middle to reduce the margin, while Gildea’s free gave Glenswilly their only other score of the half.

Meehan scored another free while Muldoon scored a great point from play, and Meehan confirmed the win with his 4th free and 7th point of the game in added time