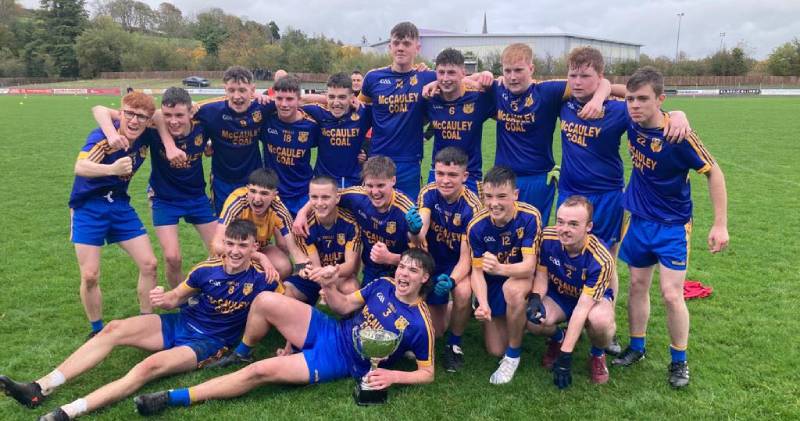 Naomh Padraig Muff put in an impressive extra-time display to run out comfortable winners in the Minor Division 2  Championship final.

Early Kevin Lynch and Rian Gallagher points from play gave Muff a good start. They were the dominant team in those early stages but were also guilty of kicking some poor wides as well.

Naomh Padraig took a while to settle but Nathan McDaid finally got their scoreboard moving with a fine point in the 12th minute.

Two minutes later McDaid was on the end of a good move but shot into the side netting with a goal chance on.

Ryan McGeoghegan’s free levelled the scores at 0-02 apiece and a minute later Nathan McDaid got another goal chance after an excellent Muff build-up and this time he made no mistake, drilling the ball low into the corner of the net.

Kevin Lynch replied with a free for Malin but Ryan McGeoghegan converted his second free to leave a goal in it 1-03 to 0-03 after 23 minutes.

Lynch almost wiped out that lead when he fetched Jamie McCauley’s free but his goal bound shot was brilliantly blocked by Taylor Bonner to deny him.

Rian Gallagher added his second point and Malin’s fourth to leave two between them at halftime, 1-03 to 0-04 in Malin’s favour.

Kevin Lynch pointed an early free to leave just one in it but almost immediately Malin added a second goal.

Nathan McDaid may have been going for the point but when his effort dropped short, Ryan McGeoghegan fisted it to the net, 2-03 to 0-05.

Naomh Padraig responded well to this setback and four points in a row had them back on level terms, Kevin Lynch got three of those , two from frees, and Tiernan Doherty also added a free , 2-03 to 0-09 and game very much on.

With ten minutes left Naomh Padraig took the lead, Rian Gallagher finished off another sweeping move with his third point and they led for the first time since midway through the first-half, 2-03 to 0-10.

Malin had only the goal to show for their second-half efforts as the wide count went into double figures before Marc McLaughlin pointed a free to level the scores but Naomh Padraig replied again with a fine James McColgan score to lead 0-11 to 2-04.

But credit to Malin as time ran out they attacked again and sub Jack McLaughlin converted to send it to extra-time, 0-11 to 2-05.

Fifteen seconds in Naomh Padraig struck a huge blow when Rian Gallagher finished off a super move of quick hand-passing to blast the ball to the net , Kevin Lynch added a point from a free and a minute later Muff were in complete command at 2-12 to 2-05 ahead.

Just before the break Goalkeeper Jamie McCauley came forward to kick a long range free and Naomh Padraig led by eight points, 2-13 to 2-05.

Finn McClafferty and Cillian Doyle added points as did the very impressive Kevin Lynch to bring his personal total to 1-08 and leave the final score 2-16 to 2-05 in Naomh Padraig’s favour.