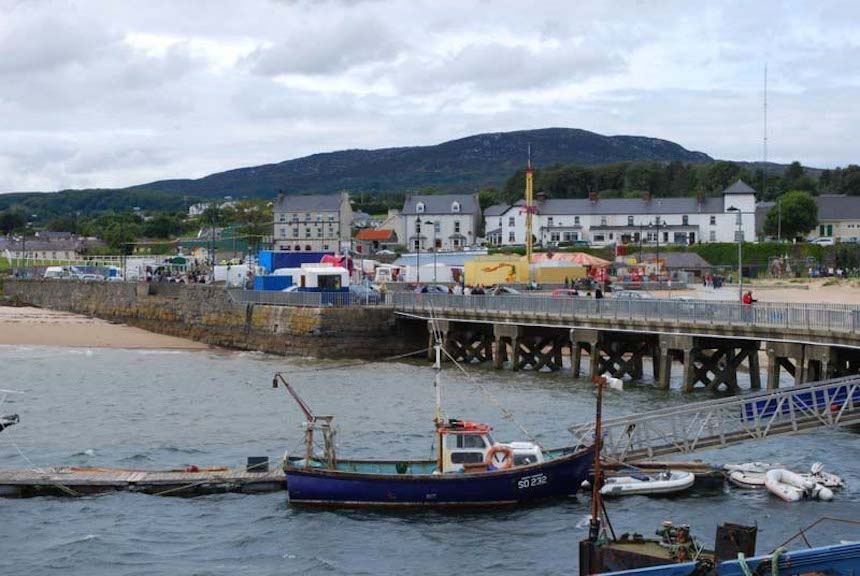 The local development group for Rathmullan has published its annual report.

‘Rathmullan, The Way Forward,’ said 2022 has been a very good year for the community.

However, many people and businesses are still suffering with the after effects of the pandemic.

On a more positive note, this year saw many visitors return to Rathmullan or visit it for the first time.

“We have been very busy since our last public meeting on 23rd May, and various local groups have made significant progress during the summer months,” the report stated.

As part of the project, they are planning to develop The Battery, Abbey and the Pier Hotel Site.

local suggestions were noted before work continued in drawing up a final design.

The council and Rathmullan The Way Forward hope to be able to formally publish the final planning scheme online and display it for Rathmullan residents, in local government Offices, before the end of November.

This publication then begins a statutory Part 8 planning process which includes consultation with prescribed bodies, the general public and making the plans available for inspection.

A Chief Executive’s Report on the proposed development will then be brought before the Elected Members of the council for their consideration at a plenary meeting early in 2023.

“If all goes as expected, we will then be in a position to apply to national government for capital funding under the Rural Regeneration & Development Fund when a future call is opened.”

Huge congratulations to our Tidy Town and Clean Coasts Groups which have been very active in improving the streetscape and environment in our village and on our beach.

Let’s hope Rathmullan has once again improved its overall position in the National Tidy Towns Competition when results are announced very soon.

Our Clean Coast Group have been very busy in 2022 and ensured that everyone had a beautiful clean beach to enjoy.

New beach ladders are now located behind the Battery and in the sand dunes near the Flight of the Earls monument.

This, along with the Beach Mats, have enhanced the beach experience for everyone.

Our website www.Rathmullan.ie was updated and focused on ” Rathmullan Your Seaside Escape” which attracted thousands of hits while promoting the area in a positive light.

Our vehicle counter monitored a 6% increase in the number of cars entering Rathmullan from the Ramelton direction in 2022 to date.

It is estimated that more than 350,000 cars will have travelled that route by the end of the year.

In addition, over 100,000 pedestrians will walk through the Ferry Gate down the Walks in 2022, with multiples of that number walking the beach.

The Greg Hughes Show on Highland Radio broadcast from Rathmullan in September, highlighting many of the area’s attractions.

Litter and traffic, however, remain a huge problem in Rathmullan.

A disturbing fact is that we continue to gather between 40 and 70 black bags of rubbish a day from the rubbish bins, the car park area, the beach and the playground area during the busy summer holiday months.

A big thank you to everyone who helps to keep Rathmullan Tidy.

We need the support of all the visitors and residents to address the Litter and Traffic problems in 2023, and will be approaching Donegal County Council litter and roads section for their support and guidance.

Speeding and parking are an increasing problem, with our footpaths in a very poor state of repair.

We also understand from Irish Water that they will begin installing the sewage pipes for the new treatment plant starting January 2023.

They will also be installing new pumps and tanks in the location of the existing tanks at Abbey View and opposite Mace.

Hopefully, when this work is completed Rathmullan beach will regain its Blue Flag status.

A dedicated group of volunteers is meeting regularly to reach out to other seaside towns and villages, especially coastal towns in Northern Ireland, with similar issues to Rathmullan.

We have established strategic contact with the Enterprise Causeway Group who represent many seaside towns along the Northern coastline.

We hope to agree a mutual plan of action after further discussions and then jointly apply to the International Fund for Ireland before 1st December in order to gain funding for our joint plans.

Donegal County Council is managing the work process with the job specification gone out to tender and work scheduled to begin next spring and continuing until late 2023.

The Pier upgrade will necessitate the closure of the Pier during most of 2023 with Pier users now in consultation with DCC on alternative arrangements.

When completed, the pier will be a much more attractive destination for all marine traffic and could once again, become a cruise ship destination.

In a very positive development, The Swilly Ferry has extended their annual contract with DCC for a seven-year period.

The Rathmullan Sailing School and Club had a very busy and successful summer.

More and more local children have taken up dinghy sailing and we encourage others to join next Spring.

For the first time ever, Rathmullan Sailing Club was represented at the National Sailing Finals held in Dun Laoghaire.

A number of events and activities are now in planning for 2023.

Our annual Film Festival will take place from 16th-19th February during the school mid-term break.

The Festival will focus on local films and filmmaking, aiming to bring these locally produced films to a local audience in various locations in Rathmullan and worldwide, using an interactive online platform.

Projects will take place in local schools in Rathmullan, Milford and in Letterkenny before the Festival and

then premier at the Film Festival in February.

We look forward to continuing and expanding our pop-up shop “Artsea” which was very successful in 2022.

Well done to the local artists for co-ordinating and marketing various art works and painting works produced in Rathmullan.

The shop also facilitates many other events and raffles annually and can be further used by the public if booked in advance.

We would like to highlight that the grounds in the Battery are available for anyone wishing to host an event.

It’s brilliant to see the Football Academy back in action and so many young kids enjoying the excellent coaching provided by the local volunteers.

We all look forward to real progress in developing the proposed Astropark and other sporting facilities on the RDRC site and we wish Ray Community Centre every success with their recent and ongoing developments.

We look forward to 3rd December with the switching on of the Christmas lights and a local Craft Fair.

The Christmas lights always help create a happy and uplifting experience for residents and visitors alike and deserve all our support.

If finances allow, lights will be further extended this year with the valued support and work of the local FAS Scheme very much appreciated. If anyone wants to help in any way or opt out of connecting to their house this year due to the anticipated increase in electricity costs, please contact Pat Patton or Posy Mc Collum.

We also hope for a large crowd participating in the New Year’s Day swim and raising money for charities as in previous years.

We would like to inform everyone that Tom Cavanagh, the late founder and chairman of The Tomar Trust, passed away recently. Ar dheis De go raibh a anam dilis.

Tom lived a long and full life and was a very strong supporter of Rathmullan The Way Forward.

Our sincere condolences to all his family.

We are very grateful to The Tomar Trust for all their support to date and look forward to their continued support in 2023.

All of our groups need your support and would welcome additional volunteers to ensure that Rathmullan continues to move forward next year.

Please get involved as best you can.