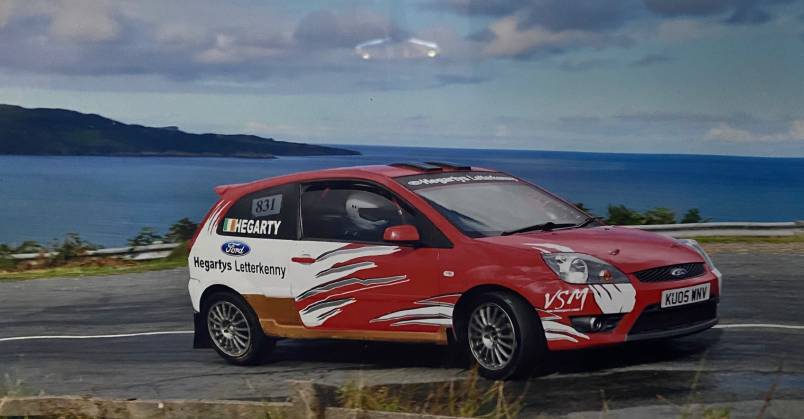 “You’ll be doing something on the Fiesta coming to an end.”

“Sure the fiesta closed years ago.”

“Not that dance hall, the car!”

A conversation I confusingly was a part of recently when I met up with a few friends. It’s the very last family name familiar to the Ford range to come to an end as trends and demands change in familiar cars.

I have to say I never was a big fan of the Ford Fiesta. It was brand new to the Ford Range in 1977 when I started serving petrol at Hegarty’s Auto Services, the main Ford dealer in Letterkenny. 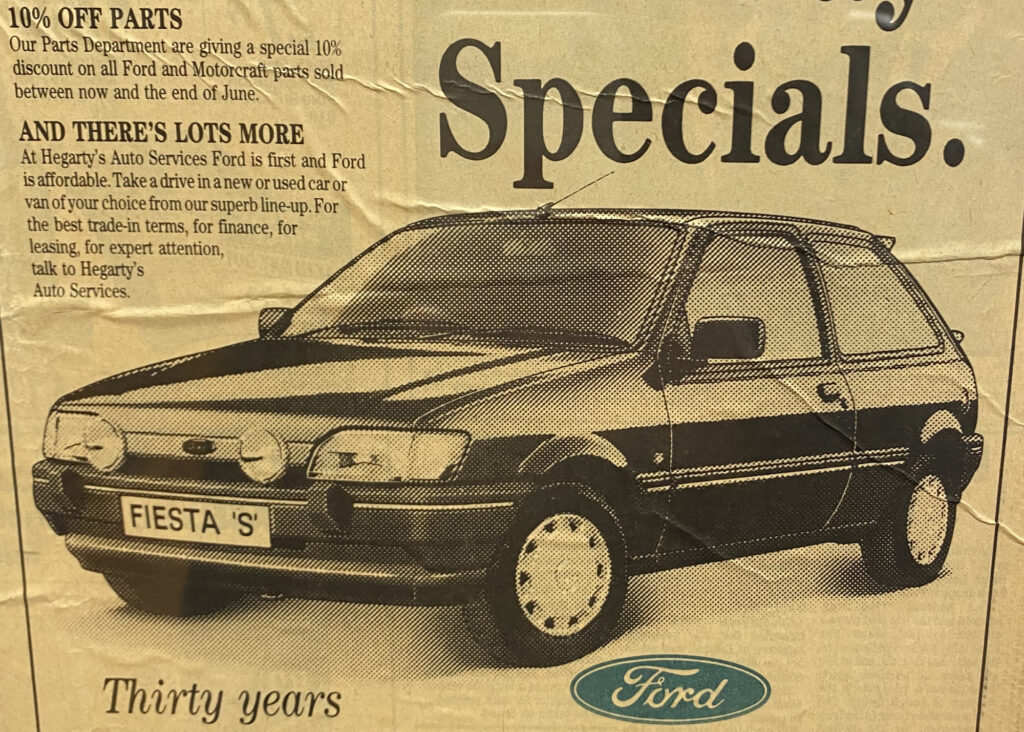 One of the many generations of the Fiesta pictured in an add in the local papers over the years.

We were Ford people and that wasn’t only because we had a few Ford’s as family cars growing up, Ford was the preferred brand by the ESB who my father worked for all his life.

I remember getting a brand new Ford Anglia Van when my mother was still living in the late 1960’s. The first wheel that I got behind to drive was a Ford D Series Lorry (KIH 458) at eight or nine years old.

And in 1976 aged 12, I had a deal with my father that if I got up and made him a bit of breakfast I could drive his brand new lorry another Ford D Series from our house down as far as Dr. Mc Ginley’s house on the new line road.

This involved a routine of starting the lorry and building up the air in the brakes before performing a difficult hill start out of Wolfe Tone. These early morning driving lessons had set the seed for driving.

I spent my years dreaming about the day I would become 17 years old and get my provisional licence and get on the road. I dreamed of driving Ford Escorts, Mk 1 or Mk 2.

These were the cars to be seen in, very big hitters on the rallying scene. It was all about back wheel-drive of the escorts of the day. So I was a bit disappointed to see that the all new Ford was front wheel drive.

Working the following summer preparing new cars for customers. The car manufacturer covered the cars with a coating of wax to protect them while they sat at ports or transported overseas to protect them from the salt air.

The arrival of a special edition fiesta delivered by Casey Car Transporter from Roscommon to Hegarty’s was to change my opinion of this new fiesta. 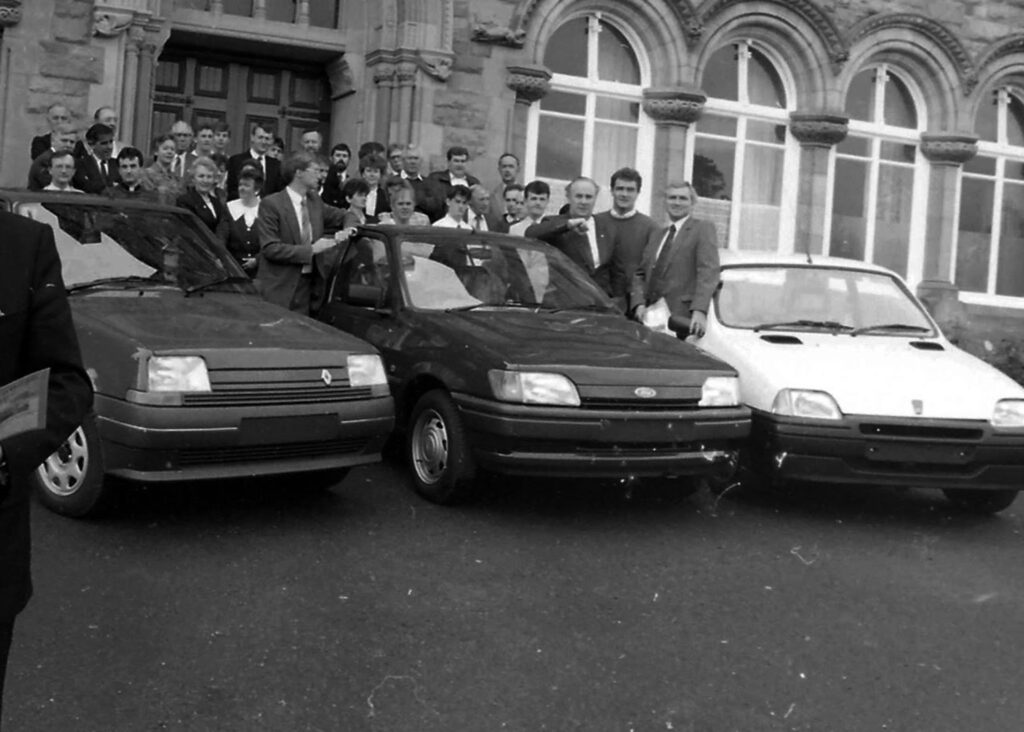 The Ford Fiesta one of the top prizes at St Eunans Draw with a Renault 5 and Mini Metro back in the 90’s. Photo Brian McDaid.

It was a silver metallic 1300S and after the pre delivery service (PDS) was carried out I was tasked with de-waxing this very sporting looking car. In them days a lot of the top of the range car like Ghia’s and Sports and RS Ford’s were assembled in West Germany.

Normally you didn’t want to see a car with a sticker on the window saying it was assembled in west Germany because this meant it was going to be twice as hard  to remove the protective wax.

A day working on that car changed my views on the Fiesta. Ford had made a great job of this, the first of the hot hatch, it had everything: tartan seats, head rests, a rev counter, a beautiful Ford time clock in the centre console, all standard in cars nowadays but luxury extras in those days.

The dash of the Fiesta 1300S complete with its rev counter

Then there was the engine, a thirteen hundred crossflow berating through a twin choke downdraft Weber carburettor bring the power of this fiesta up to 65 brake horsepower! Nothing by todays cars standards but a powerful package in the late 1970’s . 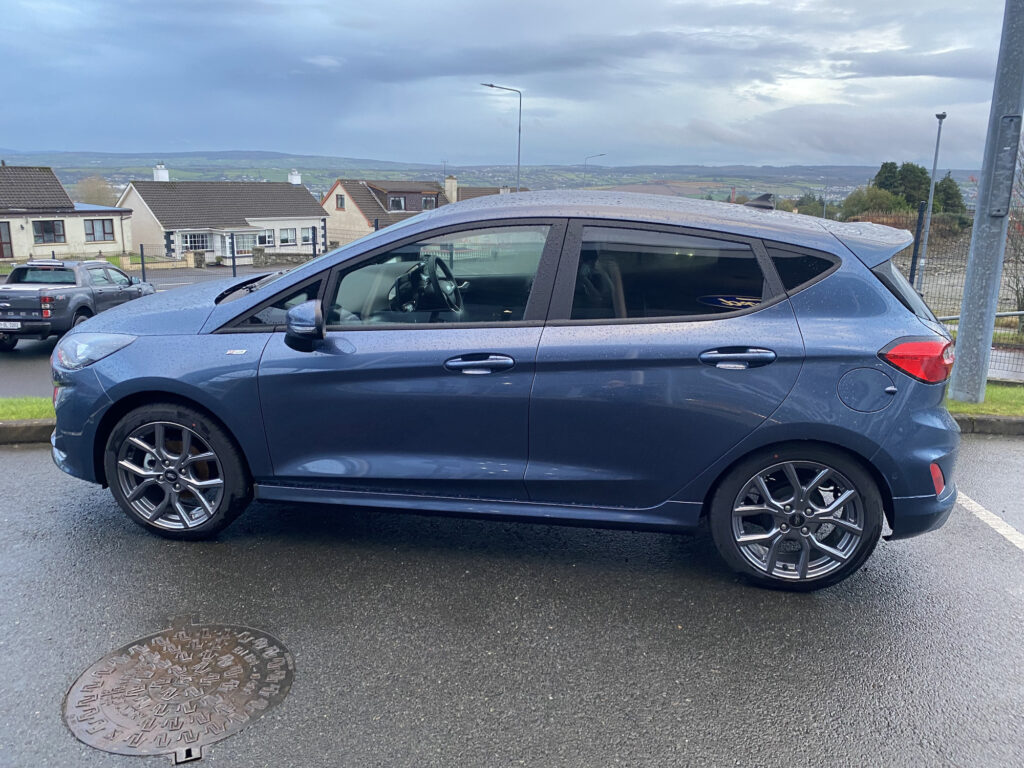 The last generation of the Ford Fiesta ready to be registered and heading to its new owner. Photo Brian McDaid.

Ford had done it; for me, covered in paraffin that we used the clean the car, I was converted. The sporting first had arrived and they had tuned up a small hatchback in the same way that they did with their Mk 1 and Mk 2 Escorts family cars to give enthusiastic drivers something that little bit more.

I dreamed some day as I cleaned that wee fiesta that I would own a 1300S when I would eventually get on the road but it was never to happen, but as we went into the eighties there was always a different fiesta landing at our house as part of the complete range that Ford had to offer.

My brother Neil became the salesman for Hegartys Auto Services in Letterkenny. One of the top spec fiesta that he brought home one weekend had a very high spec radio cassette player installed in it, and my younger brother would go out and sit in the car and play his music in it. 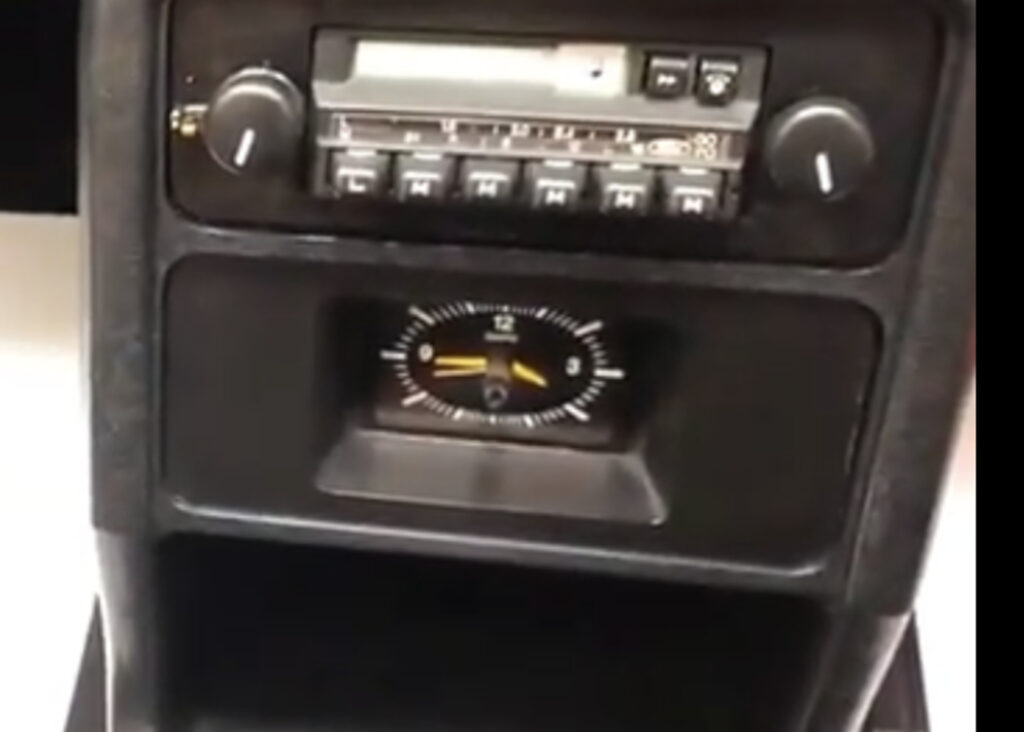 The car had to be switched on one notch to power up the radio but when he was about to get out of the car he mistakenly turned the key in the wrong direction and the wee fiesta started in gear and ended up climbing the ditch of Willie Crawford’s field.

When I got a shout to get up out of bed I came out to find the fiesta balancing on top of the ditch. With the help of our next door neighbour and a big plank of wood we managed to lever that car off the high ditch and back to the safety of the road. He wasn’t the first to crash a Ford at the back of our house, recalling myself crashing an ESB van a decade before that.

My brother Neil sold a lot of Fords as salesman at Hegarty’s and a lot of them were Ford Fiesta’s.

He had one of the first diesel Fiesta’s as his own company car in the early eighties. He sold our uncle a Ford Junior Transit  which we converted into a homemade camper for his fishing trips around Teelin and the likes.

My brother Neil then emigrated to America in 1985 and when it was time for my Uncle Johnny to change again, he bought himself another Ford, this time a wee gold coloured five door fiesta, little did we know then that this would be the last car uncle Johnny would own as he was to pass away in 1990. 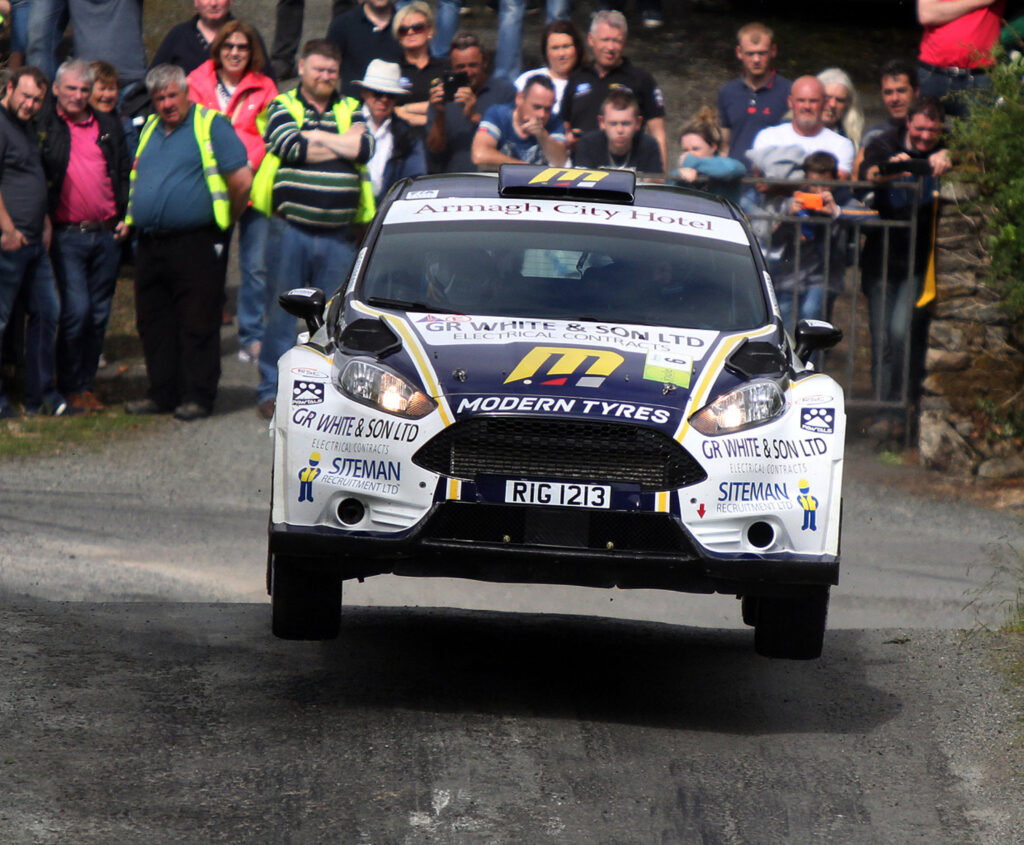 He left his wee fiesta to his younger brother, Fr. Mark. Mark thought the world of the Fiesta and drove it for years. And as the wee Fiesta started to show its age Fr. Mark still had faith in his wee Fiesta and would think nothing of heading to Dublin or even Cork on occasion.

Fr. Mark modified the passenger wing when he caught it in a wooden fence and rather than getting it fixed, his extended family took the opportunity to get Mark to part with the fiesta his brother Johnny left to him and bought him a new second hand Opel Kadette.

I remember Fr. Mark asking me what they would do with his old Fiesta and I convinced him that it would probably be broken down for parts. As Fr Mark settled into his new car he landed up to visit us one evening and he started to tell us the story of what he saw in his travels that day.

“I was heading down the blue banks and who do you think I met coming up the way? Johnny’s wee Fiesta with a red wing on the passenger side, it was going that well I didn’t think it it would get around the corner at the top of the hill.”

There was a joy in his voice telling his story, confirming that his faith in his brothers fiesta was backed up and plus the fact that someone else had fixed up that wee gold fiesta and as it work out got another few years motoring out of it as Fr. Mark would always remind me every day he got a feeling of joy when he met his brothers car on his journey through life.

The word Fiesta means two different things in Letterkenny, both eras now about to be embedded in our memories of growing up.

One era thinks like Roller Discos, which were all the go in the Fiesta Ballroom when I was growing up, to memories of a lesser spotted ‘red winged golden Fiesta’ of my uncle Johnny and then Fr. Mark’s that seemed to go on forever, and the last of the Fiesta’s ready to become part of someone else’s life story.