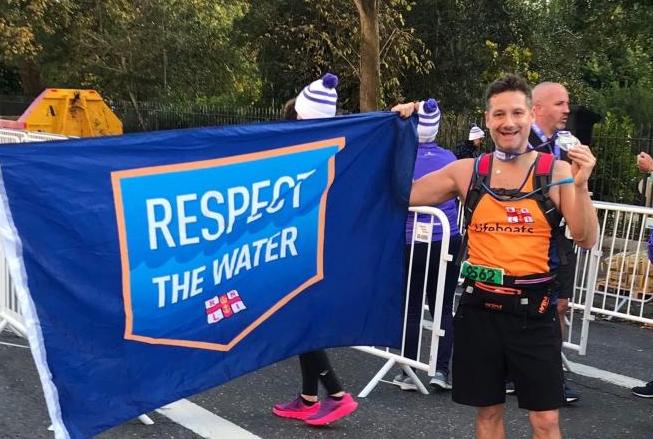 A man who was rescued from a well-known Donegal beach has run the Dublin marathon in his bare feet to say a huge thank you to and to raise funds for the RNLI.

Chris Gallagher was visiting Murder Hole Beach in July when he got caught up in a rip current.

The Omagh man, an experienced swimmer, was eventually rescued by the Irish Coast Guard but only after clinging to a small rock for two hours.

Chris relived the moments of his ordeal.

He said “I am an experienced swimmer, having previously been a lifeguard and a world record swimmer as well as swimming all over the world including in Australia but I have never been caught like this before.

“I wasn’t even 10m out into the water when the ferocious rip caught me and threw me about like what I can only describe as being in an industrial washing machine and a racing car at the same time, it was powerful, and I had absolutely no control.

“I felt calm initially as I know how to work my way out of a rip curl as I was caught in Australian waters 22 years ago but nothing I tried worked. By the grace of God, a rock was in my grasp as I was being pulled into the rip roaring waters and I managed to get my body out of the water onto that wee rock but I was fighting the waves to stay on as they threw me on and off like a rag doll. I was clinging to the rock for dear life for two hours.”

Since he was rescued, Chris has signed up to be a water safety volunteer with the RNLI with a particular interest in highlighting the dangers of open water swimming.

He has also done a series of inspiring fundraising events with his most recent venture to not only undertake doing the Dublin marathon but to do it in his bare feet which he completed successfully last Sunday.

He also did the Kerry Hardman Ironman triathlon on his birthday in August and in September, completed a 5k swim of Glencar Lough in Sligo.

To round off his series of events, he is running an eighties themed night this Saturday 5 November in the Village Inn in Killyclogher.

Proceeds from all events will go to Bundoran RNLI and Lough Erne RNLI where there are two lifeboat stations at Enniskillen and Carrybridge.

Speaking of his efforts to raise both funds and water safety awareness, RNLI Community Manager Nuala Muldoon said: ‘Chris really is an inspiration and his own rescue story highlights how even the most experienced water users can still find themselves in difficulty.

“We are delighted that he is now promoting water safety and are in awe at how adventurous he has been in setting himself courageous challenges in his pursuit to raise funds. Thanks to Chris, the proceeds raised will now power our lifesaving volunteer crews to continue their good work in saving lives both at sea and on inland waters.’

Rescue on Donegal beach inspires man to run and ‘bare’ it at Dublin marathon was last modified: November 4th, 2022 by Staff Writer
FacebookTweetLinkedInPrint