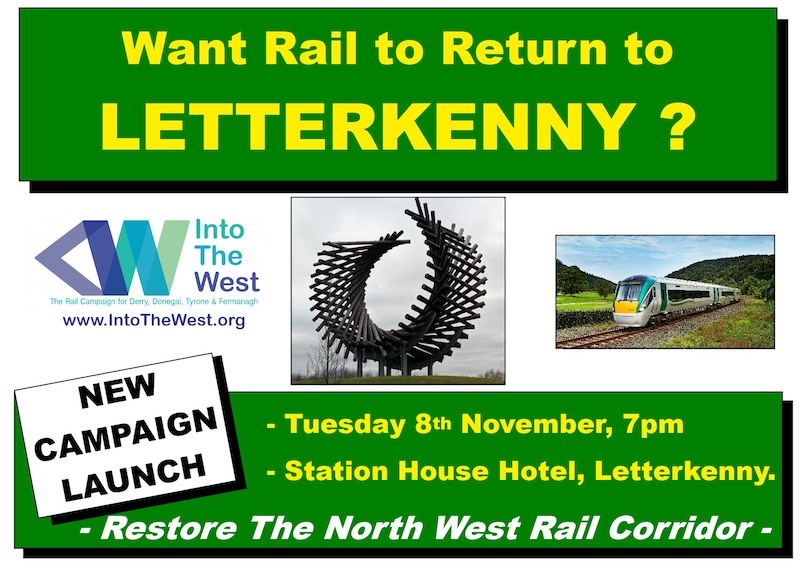 Campaign to have Donegal railways restored to meet tonight

A campaign calling for the reopening of two key railways in Donegal that were closed in the 1950s and 60s is holding a launch event in Letterkenny this evening.

‘Into The West’ campaigns for the improvement and expansion of rail across counties Donegal, Derry, Tyrone and Fermanagh.

The organisation was founded in 2004 when they successfully defeated a proposal to close down Derry’s railway line. Since then the group has helped secure major investment in the Derry railway line, as well as a new transport hub for Derry.

In recent years they have also broadened their focus onto making the case for the restoration of key rail routes across the west of the province of Ulster. And now they have launched a campaign for what they describe as “the number one rail-reopening priority across the island”.

It is almost 60 years since trains last ran on the Great Northern line between Derry and Portadown. That route included five stops in Donegal (Carrigans, St Johnston, Carrickmore, Porthall and Lifford) before trains traveled on via Strabane, Omagh and Dungannon to Portadown and Dublin.

The line was controversially closed in 1965 in a decision that ended a century of rail access for Donegal and Tyrone, and stripped the west of Ulster of most of its infrastructure. The closure also severed a vital link between Dublin and the north-west of the island, and ushered in decades of car dependency. The railway line that ran between between Derry and Letterkenny had previously been shut in 1953, which greatly impacted the role of both towns as key transport hubs.

Since these closures two whole generations have been raised in Donegal without access to a transport mode most of the rest of the island takes for granted. And that has had a negative impact upon the economic growth, population and tourism appeal of Donegal and the north-west.

The public’s desire to see rail return to the North-West has remained strong ever since. This was shown earlier this year when the public consultation for the cross-border ‘All-Island Rail Review Strategy’ saw the highest number of contributions coming from the region. 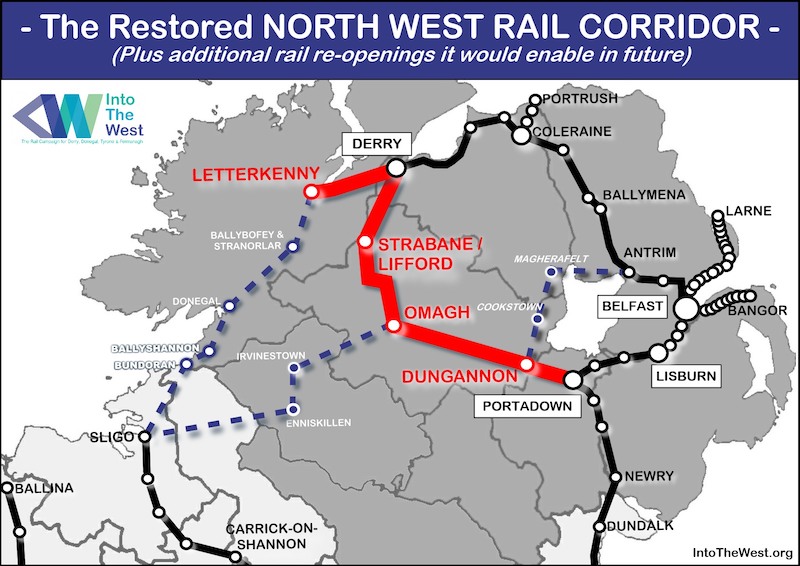 Into The West have therefore launched a major campaign that seeks to turn that aspiration into a reality.

They are calling for the restoration of what they have christened ‘The North West Rail Corridor’ – which would see trains start in Letterkenny and travel through Derry, Strabane/Lifford, Omagh and Dungannon to Portadown, from where they would continue onwards to Dublin and Belfast via the existing rail network.

Chair of Into The West, Steve Bradley, said “The North West Rail Corridor is an exciting proposal to reopen a much-missed spine of rail that previously connected the North-West of the island to Dublin and Belfast. It would mark the return of rail to two of Ireland’s largest counties – Donegal and Tyrone – and put key towns like Letterkenny, Strabane/Lifford and Omagh back on the rail map.

“By linking these towns and counties directly to the island’s main economic and tourism hubs in Belfast and Dublin, the Corridor would enable employment, tourism and population growth in places that currently feel neglected and left on the periphery. And it would help bind the North West City Region of Letterkenny, Derry and Strabane much closer together. No other initiative would have as profound an impact upon Donegal as restoring its rail access would.

“And no other rail project on the island would connect such a large number of people across so many significant towns and counties. That’s why the North West Rail Corridor should be the top priority rail reopening for governments north and south, and the number one focus for cross-border funding. For too long the north-west of the island has been left disconnected, disadvantaged and disregarded. Committing to the North West Rail Corridor would enable the authorities north and south to prove they are committed to addressing that”.

Into The West have launched this campaign in-advance of the release of the ‘All-Island Rail Review Strategy’, which is likely to be published in the New Year, They aim to galvanise public support across the region to influence that report’s findings and to build a head of steam around making the North West Rail Corridor a priority reopening.

Into The West are holding a series of public events about the North West Rail Corridor and their campaign in each of the main towns along the route. The first event last night in Derry attracted a bumper crowd and was standing room only.

The Letterkenny event this evening (Tuesday) takes place at 7pm in The Station House Hotel on Lower Main Street.