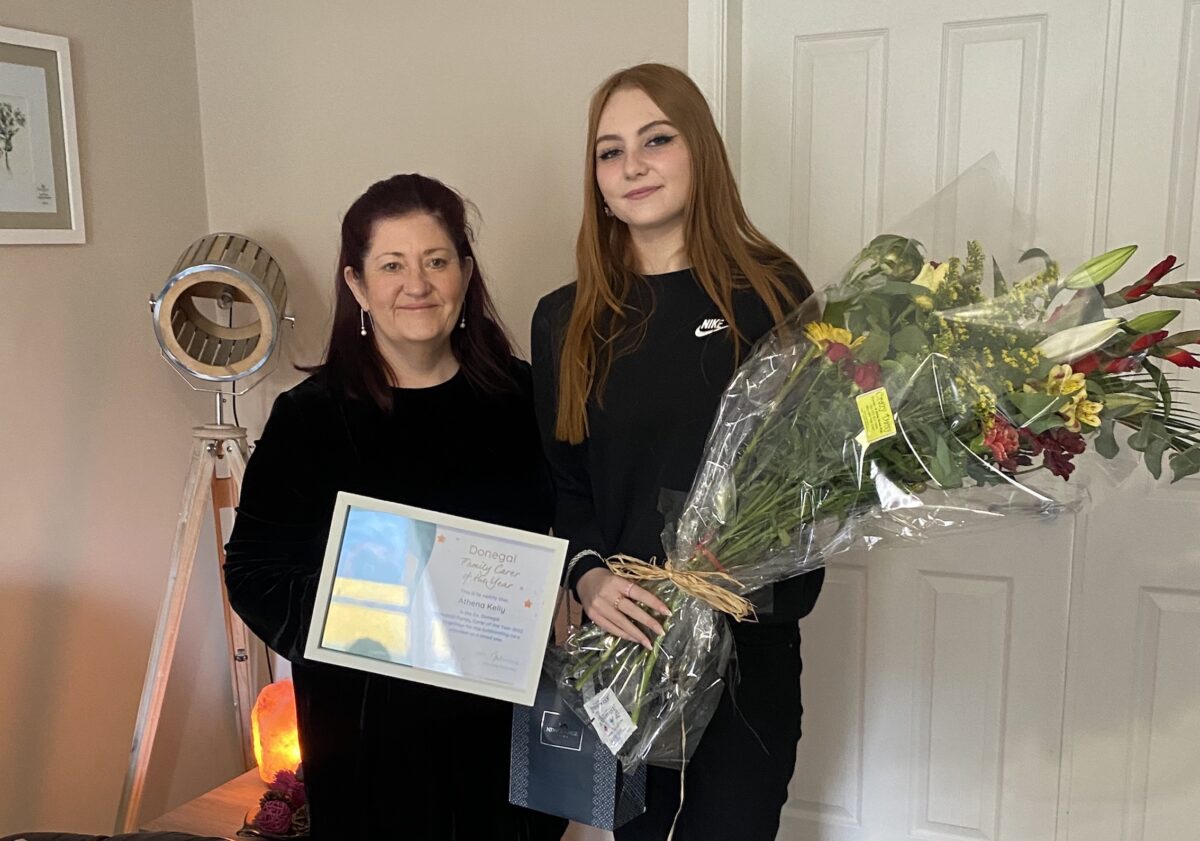 Young Donegal woman is ‘Carer of the Year’

A young Donegal woman has been declared national ‘Carer of the Year.’

Athena (main pic on right) has helped to care for her younger brother, Alaric (17), since he was diagnosed with autism and ADHD at the age of four.

She has been a great help to her sibling and has given up many nights out with friends to sit in and comfort Alaric, who also has sensory issues and is a wheelchair user.

Athena was nominated by her mother, Kerrie.

She confirmed that, while they planned an 18th birthday party for their daughter earlier this year, shortly before Athena’s Leaving Cert exams, she refused and instead spent it celebrating quietly with her brother.

Athena has recently started studying psychology in Maynooth University in the hope of becoming a child psychologist to help children like Alaric.

Her mum says that Athena rings Alaric every night and stays on the phone with him for hours to make him laugh and to help calm him, with both having their own secret language to communicate.

She describes her daughter as a beautiful young lady inside and out who always puts her brother’s needs first and never complains.

Now in their 15th year, the Netwatch Family Carer of the Year Awards seek to recognise and shine a light on the remarkable contribution of the more than half a million carers in Ireland.

These people provide care at home to loved ones such as children or adults with additional needs, physical or intellectual disabilities, frail older people, those with palliative care needs or those living with chronic illnesses, mental health challenges or addiction.

The 19 million hours of unpaid care provided each week by family carers would cost the State €20bn a year to replace.

Family carers often go unnoticed in the community despite the immense workload they take on and the significant commitment they show to those that they care for. This has particularly been the case during the pandemic with many left increasingly isolated.

“Caring for a loved one at home can be rewarding but it can also be challenging, particularly in the absence of vital supports and services including respite,” she said.

“This can take a toll on a person’s physical, mental, financial and social wellbeing. Often, a person can find themselves taking on the role of a family carer with little or no warning. They are doing extraordinary work that is too often unseen and undervalued.

“These awards are an important event in our calendar every year as we seek to provide some small recognition to all of those who care at home for loved ones with additional needs and to ensure their stories are heard.”