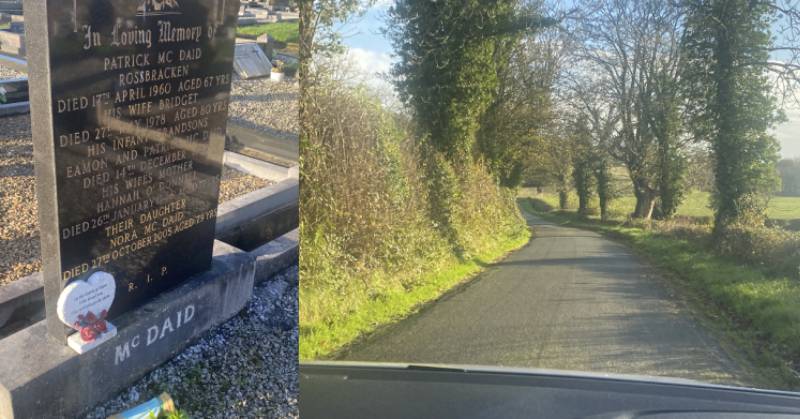 DD Motoring: Dealing with grief and the road to Drumoghill

In December, the youngest is the last to catch up on his birthday and for one month every year there will be exactly one year in our age between us before my birthday (the oldest) will arrive in January and I will be two years older.

There was a time for a few years that we didn’t know when our birthdays were following the death of our mother. The year she died we were 2, 3,4, and 5. My father knew roughly what month we were born but didn’t know the dates. 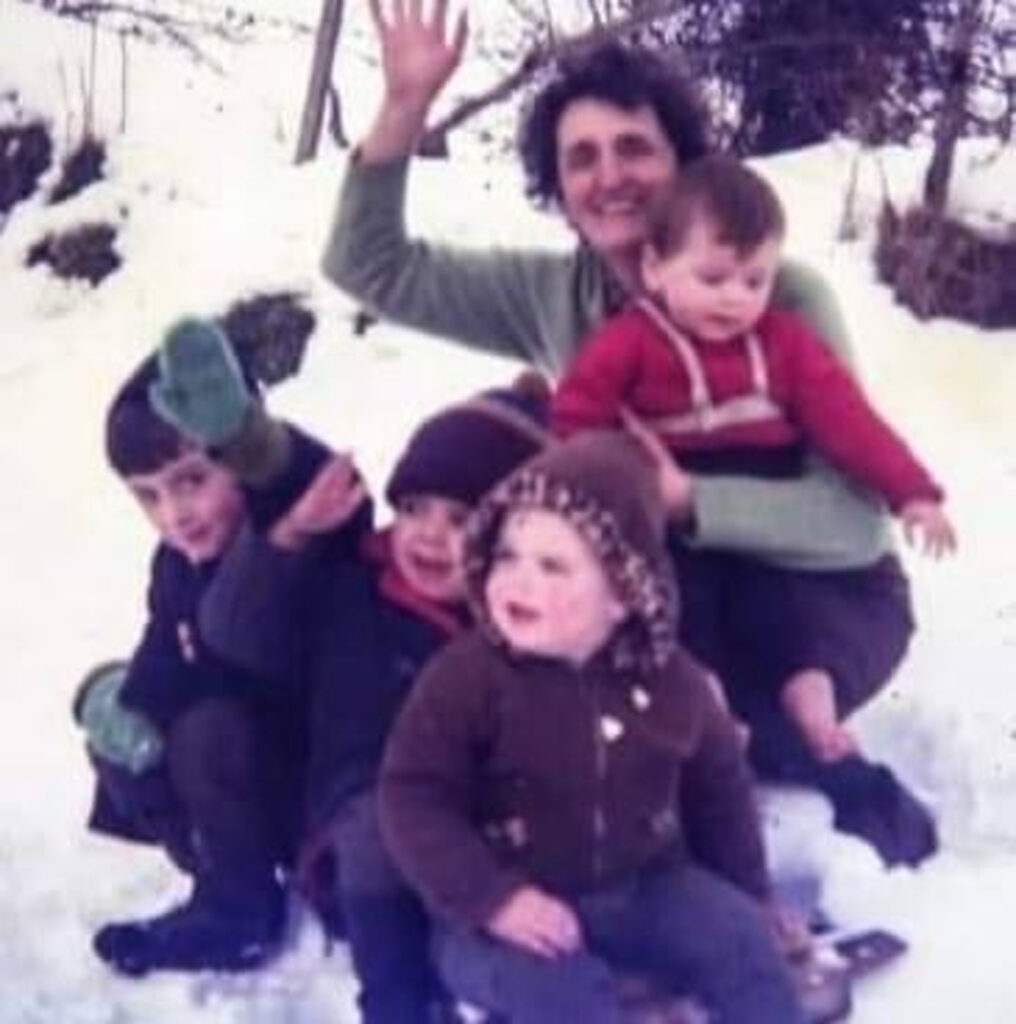 My auntie B went and checked out the dates when we were baptised at the parochial house and from there she got our dates of birth (Years after I came across her hand writing where she carefully had our full names written out in an old page from a writing pad).

From then on she looked after our birthdays, which were all celebrated on the Back Road. My uncle Miah looked after the cake from the Model Bakery where he worked.

A decade ago I found myself taking the same journey as my auntie  B, checking out the dates of family details, not so much to celebrate their birthdays but more just to make sure that their short existence on this earth was recorded.

It was back in the time when graveyards were putting up the names of the people buried in the graveyards on a board at the entrance to each graveyard.

We had two older brothers, twins that died as infants two weeks apart. They were buried along with my great granny O’Donnell and grandfather McDaid in Drumoghill graveyard. 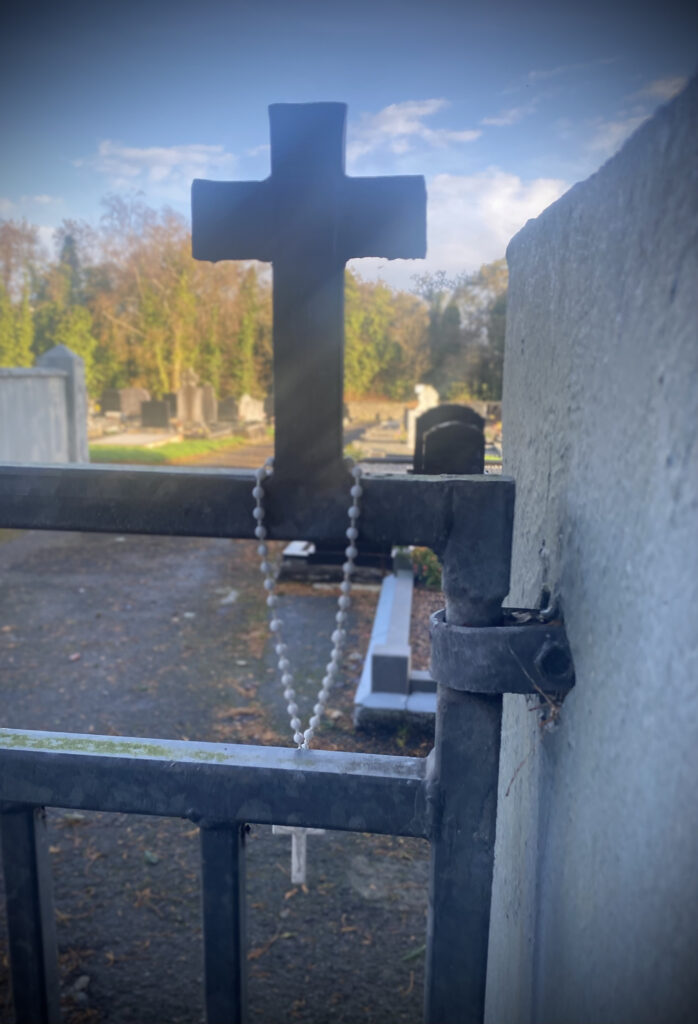 A pair of rosary beads on the graveyard gate in Drumoghill Photo Brian McDaid.

As a child we would go to Drumoghill to visit this grave. The headstone only had my great granny and grandfather’s name on it and in later years my granny’s name was added when she passed away in the late 70’s but my father always told us about the twins,  our brothers that were buried there.

My father was of the type who was too proud to ask for help and would rather keep his grief inside and never looked to have the boys’ names added to the headstone.

His older sister did up the grave and put up a new headstone and included the names of everyone buried there. That included her granny, her father, her two nephews, her mother on the new stone and left room for her own name when she passed away in 2005. 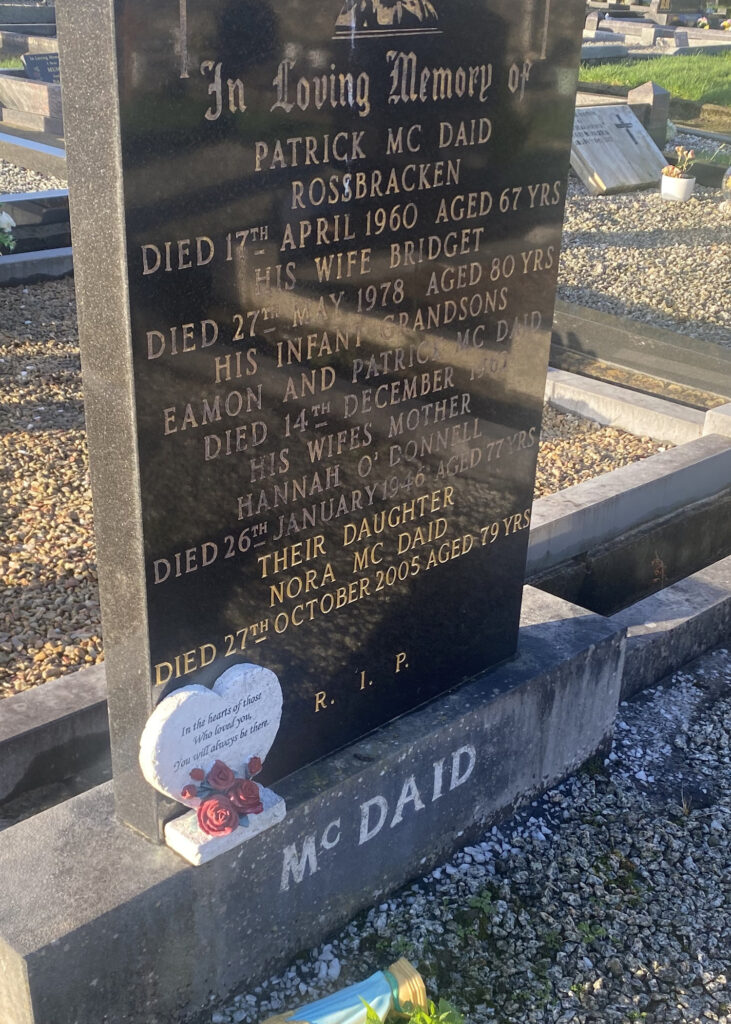 The headstone in the family plot with the names of four generations of the McDaid family. Photo Brian McDaid.

My father didn’t live long enough to see his two sons’ names chiselled in stone on the new headstone,  passing away in 1990.

So as we move through November this year, a recent visit to the graveyard in Drumoghill reminds me that had the twins live they would be celebrating their 60th birthday next week.

I can’t believe how fast the last ten years have passed from when it would have been their 50th birthday when the church was drawing up the names for the information boards.

My father would often talk about the twins and their very short life on this earth and how 60 years ago he and my mother  travelled down from Sligo where my father was based with the ESB so that their children would be born in Letterkenny General Hospital.

I can only imagine what it would be like for them as a newly married couple awaiting the arrival of their first born.

Sadly the twins were very poorly when they were born, Eamon the second born only surviving for two days and Patrick, his brother, born first living for two weeks.

On a winter’s day this week I took time as I turned off the main Lifford road and headed up the winding road to the church in Drumoghill, I realised that this road is exactly the same as it was 60 years ago.

Hawthorn hedges lined the route on the country road and in the low winter sun I imagined my father as he made the journeys with his twin infant sons placed in tiny coffins in the back seat of an old Anglia Prefect. 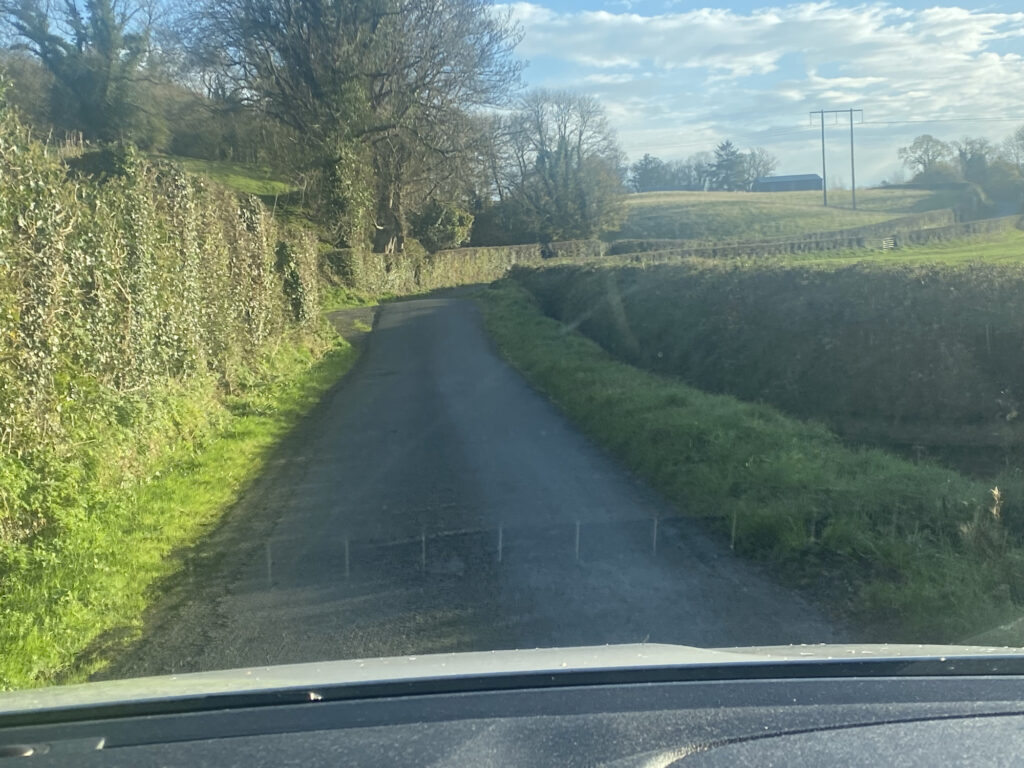 I don’t even know if my mother would be there as she possibly would still have been in hospital.

As I headed back into Letterkenny I turned off the main Lifford Road and took the old road that runs parallel to the dual carriageway into the town.

I passed the old sign pointing me in the direction to Letterkenny and made my way up through the small village of Pluck and headed past our grandparents house. 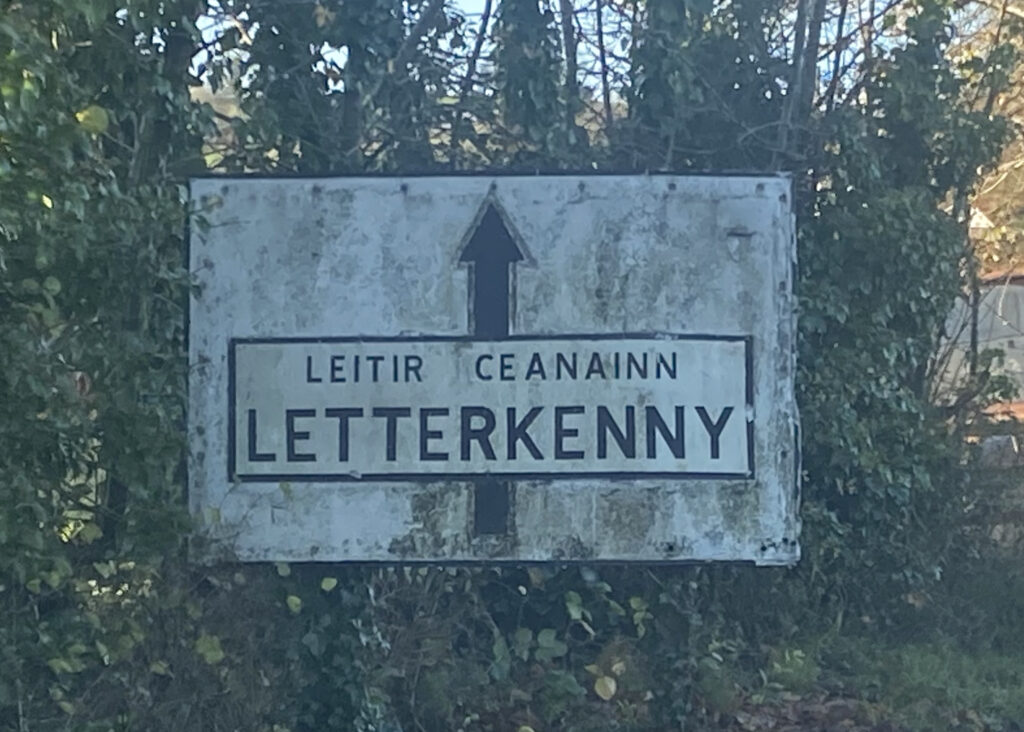 I thought about the five McDaid names in Drumoghill Graveyard from Rossbracken, all from the one family.

My grandfather Patrick who died in April 1960 aged 67, his grandsons Patrick, called after him and his twin brother Eamon, December 1962 infants, his wife Bridget, May 1978 aged 80 and their daughter Nora October 2005 aged 79.

Also buried in the family plot was the twins’ great grandmother Hannah O’Donnell, January 1946 aged 77. All recorded with an address of Rossbracken. I thought of my parents heading back to Sligo before Christmas carting the grief of their loss.

Between 1961 and 1966 my parents lived where the ESB sent Daddy,  places like Manorhamilton in Co. Leitrim where my address on my baptisms form was given after my arrival at Letterkenny General Hospital, then we moved to live over the Post Office in the village of Grange in Co. Sligo and rented a house on Lower Main Street next door to the Devlin hall.

This is where their second son, Nelius arrived before they eventually got a council house in Wolfe Tone Place, where the third son, Cathal arrived followed by the youngest – Peadar.

We had 4 very happy carefree years in Wolfe Tone Place, four boys growing up in a busy house,  I remember little things like birthday parties, putting up the, Christmas star over the light holder in the hall and the red glow of it in the window,  in Wolfe Tone, the sound of the motor of the sewing machine of my mother working as a dressmaker, then days walking ‘down home’ as my mother called the shop on the Back Road holding onto a pram.

On the second day of a new decade in 1970, my mother Mary Ellen passed away as Letterkenny was covered in a heavy blanket of snow. Then Fred was left with the four boys and in them were very difficult years that followed. 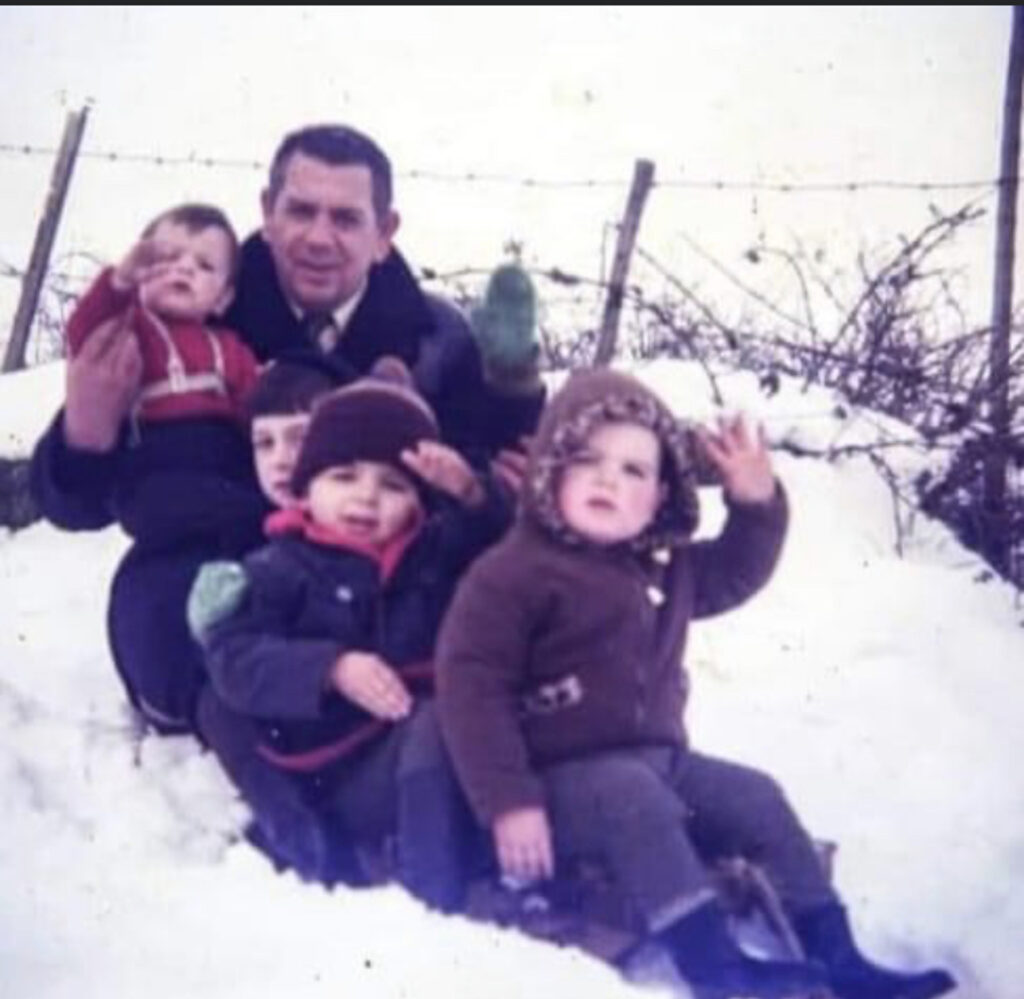 It really was Fred and his six boys including his deceased wife and the twins that he never let go ff. Growing up I often wonder what it would be like if my two older twin brothers Eamon and Patrick were still here. But sadly that never was going to be.

It’s 32 years since daddy passed away and wherever heaven is, the four of them are all longer there than we have had them here on earth in our lifetimes.

I recently stopped off in the village of Grange and turned off and drove along the old road that runs parallel to the new road.

In the 1970’s my father drove an ESB truck to Sligo and would always stop for a sup of tea at the top of the hill heading out of Grange to Sligo and would always tell me the story of him and my mother taking me out this road for a walk in the pram. Happy with their third born child, now their oldest child, but still grieving at the loss of the twins and now his wife.

So as the month of November heads into the winter I think of the two brothers that none of us ever met but their memory was held alive by my father over the years and my auntie Nora that made sure their names were included with everyone else which makes it possible to wish them both a heavenly 60th up coming birthday.

They would also have fitted into the steps of a year apart between the six boys for just a few days between their birthday and the youngest in the family before everything rolls on to another year.

DD Motoring: Dealing with grief and the road to Drumoghill was last modified: November 16th, 2022 by Brian McDaid
FacebookTweetLinkedInPrint