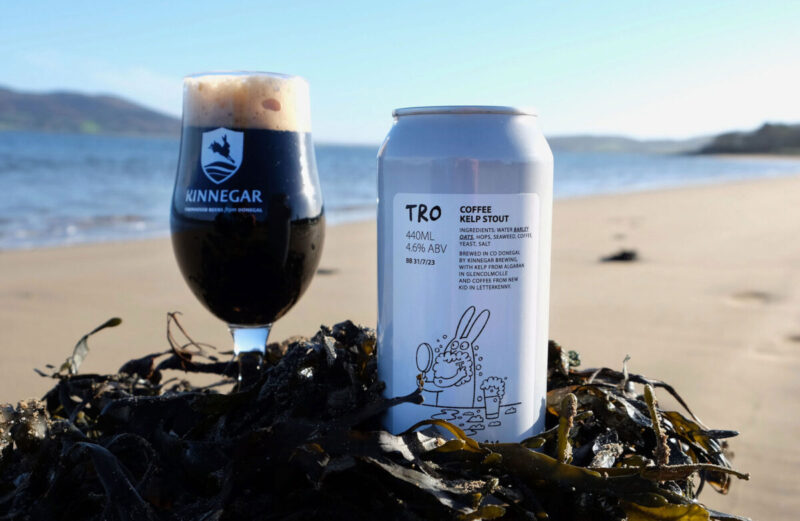 An award-winning Donegal brewery is using an unlikely ingredient in its new pint of plain.

The beer boffins at Kinnegar have gone and combined seaweed and coffee to produce their Coffee Kelp Stout.

Their Taproom Only (TRO) concept is one of the more off-beat, unusual and adventurous experiments at their Ballyraine brewery in Letterkenny.

Rick LeVert is owner and Head Brewer at the independent outfit that was born in nearby Rathmullan.

“The first thing we discovered is that seaweed – sugar kelp in this instance – impacts the gravity of the wort, tricking with the results that we’re used to seeing in the kettle,” he explains.

Of course, their kelp comes from Rosaria Piseri and her team at AlgAran in south west Donegal.

They hand harvest organic seaweed at Muckross Head in Donegal Bay and process it in Glencolmcille.

The brewing team also discovered that ‘cupping’ – the time-honoured sensory process for selecting coffee beans – is a very specialised skill.

Under the guidance of the experts at New Kid Coffee, also based in Letterkenny, Rick eventually agreed on a bean from Fazenda Bela Vista in Brazil.

“The clean flavour profile of this particular bean should allow the other ingredients in the beer to shine”, explains New Kid maestro, Richard Finney.

A familiar voice from the Kinnegar team, Sean McCarthy, had this to say.

“And, as a naturally processed coffee, it should boost the body and make for an interesting beer texture.

“We think it all worked out pretty nicely but the proof of the stout is in the drinking!”

However, The TRO series has very limited availability.

“We work with just five ‘Taproom Partners’ around the country – in Belfast, Dublin Cork, Galway and Athlone – and they become Kinnegar’s ‘home away from home’ for the release of these very special beers.”

This unique Coffee Kelp Stout is being released today and Donegal beer enthusiasts are lucky that they can enjoy it at Kinnegar’s K2 Taproom in Ballyraine, open Wednesday to Saturday, 1–7pm.

For anyone who can’t get to the brewery, cans of this intriguing Donegal collaboration can be purchased on the Kinnegar webshop.

New Kid Coffee and the unique range of seaweed food and cosmetic products from AlgAran are also available online.