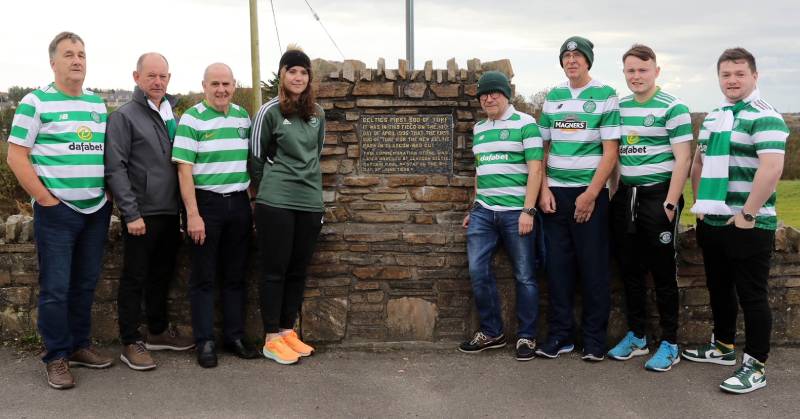 The Donegal public is being encouraged to sign up for the ‘Celtic Sleep Out’ to raise funds for the Creeslough Tragedy at the Naomh Muire Íochtar Na Rosann GAA club.

The Celtic Sleep Out will take place on Saturday, December 3 at Na Méilte (The Banks) in Mullach Dearg, located in the Rosses area of Donegal.

The Sleep Out event in Donegal is part of this year’s Celtic FC Foundation Christmas Appeal, from which a portion of the proceeds raised will be donated to assisting those affected by the tragedy, over the festive period.

Sleep Out participants will spend the night – from 10.00pm to 6.00am – battling the elements outdoors, all for a wonderful cause, which can be donated to here.

Former Donegal manager and former Celtic coach Jim McGuinness will be in attendance for a Q&A at the start of the night.

Jimmy Boyle, a Glasgow native who has lived in Donegal for 40 years, is the secretary of the Rosses Celtic Supporters Club, who were approached by the foundation.

And he thanked Naomh Muire who were kind enough to let them use their facilities for the sleep out and nominated the St. Vincent De Paul Annagry charity for a donation.

Any money raised from the Irish Sleep Out stays in Ireland and will go to other charities, like the SVDP.

The Celtic FC Foundation will provide a ground mat and foil sheet/blanket but participants are required to bring the appropriate equipment and wear relevant clothing and footwear.

The Rosses area holds special historical significance to Celtic Football Club, having provided the first sod of turf to be laid at the new Celtic Park in April 1995.

The Celtic Foundation know it is a difficult time for fundraising due to the economic climate, but it is that issue which drives them on to make their Christmas Appeal, and hopefully make it a better Christmas for some of the vulnerable and needy this year.

A spokesperson for the Celtic FC Foundation said: “The gift of this sod of turf was in keeping with the very strong Donegal and Irish connection with the Club and a number of the CSC’s members presented the sod to Fergus McCann and Packie Bonner who, of course, is a native of the Rosses area.

“The ceremony mirrored the 1892 donation of turf by Celtic Patron, Michael Davitt for the original Celtic Park, with the sod widely believed to have been from Donegal.

“Funds raised will help to bring relief this festive season to those who are struggling at an especially challenging time of year.

“The primary focus for monies raised through this Donegal event will be to provide support directly in Ireland, including to those within the Creeslough community.

“So please follow in the footsteps of Brother Walfrid and help us make a difference to those most in need within our communities this Christmas.”

Registration for the event is now open. Places are limited and will be allocated on a first come, first served basis. The non-refundable registration fee is €35 per person.

Each participant is tasked with raising a minimum of €150 (after entry fee) in support of this year’s Christmas Appeal.

Due to anticipated severe weather conditions, this event will be exceptionally challenging, both mentally and physically. Therefore, participants must be aged 18+ and be in an appropriate physical condition to take part.

Donegal public encouraged to participate in ‘Celtic Sleep Out’ in aid of Creeslough Tragedy was last modified: November 19th, 2022 by Dáire Bonnar
FacebookTweetLinkedInPrint