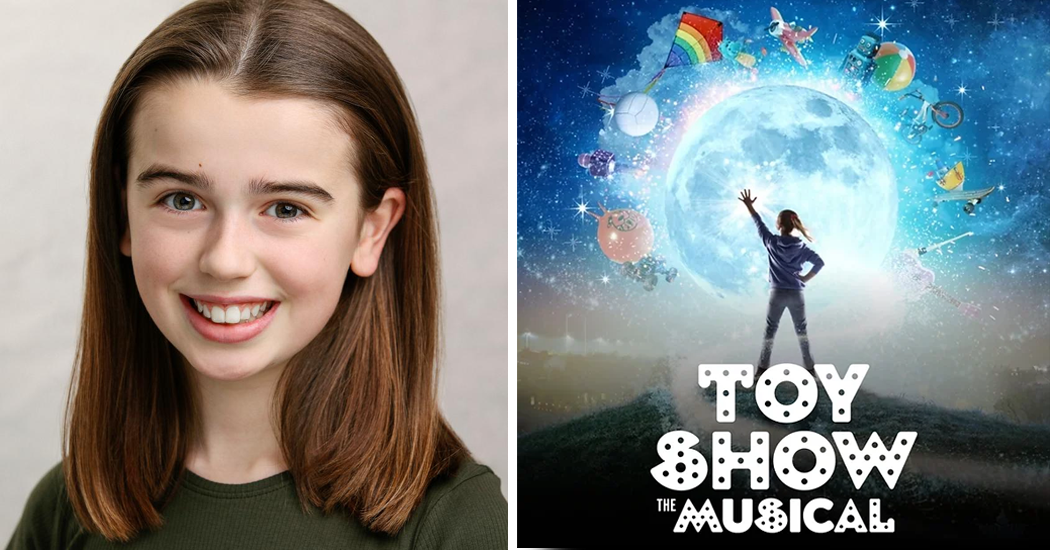 A talented teenager from Donegal is beginning an unforgettable stage adventure on RTE’s Toy Show The Musical.

Sadbh Breathnach from Manorcunningham was selected from hundreds of hopefuls to play a lead role in the major production themed on Ireland’s beloved annual Late Late Show children’s special.

Fifteen-year-old Sadbh is one of three young actresses playing the character Maisie in rotation during the show’s three-week run.

Sadbh, who is the daughter of Colm and Sinéad Breathnach, says she feels lucky to be part of such a major production.

Toy Show The Musical is the brainchild of two Toy Show producers, Jane Murphy and Katherine Drohan, and is directed by Donegal Town man Séimí Campbell.

The cast includes more than 30 children from all over the country.

Sadbh’s journey started with an online self-taped audition before the summertime, followed by live auditions in Dublin.

In the beginning of September, she got the good news that she had secured a principal role.

Sadbh told Donegal Daily: “I was absolutely over the moon, I really couldn’t quite believe it. I actually burst into tears. I was so excited to get any part in this amazing production. But to get the role of Maisie, one of the lead roles. I was thrilled.

“I love Maisie as a character and I’m so lucky. Maisie is a wannabe journalist TV presenter, she is fun, she is loyal. I relate to her quite a lot, I think she is very like me in a sense.

“I think the audience is going to love Maisie as well as the whole musical.” 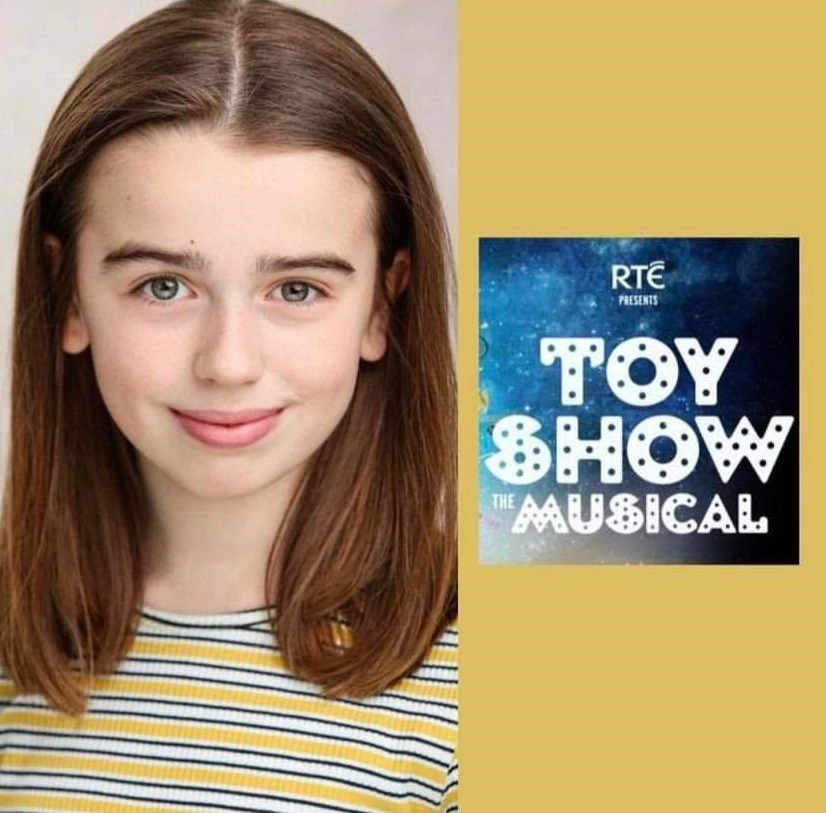 Sadbh and her co-stars have been rehearsing in Dublin for the past three weeks as they eagerly count down the days to opening night at the Convention Centre.

“The rehearsals are going so well,” she said. “There is a lot to learn and a lot to do, it’s quite intense but I am loving it. It’s what I love to do. I’m meeting great people and I’ve already made really great friends.

“I’m really looking forward to 10th December when we open. All of the practice and rehearsal that we are doing is gearing up for that date. Everybody is so buzzed and I really believe it is going to be something very special. It is going to be a great show.”

Early previews of the show say it’s a rollercoaster of emotions, comedy and fun. The audience will be seeing some familiar faces from previous Toy Shows too, with special appearances from youngsters including Adam King, who captured the nation’s heart with his Hug For You on Toy Show 2020 and DJ Calum, who spun the decks like a pro with his little brother Hypeman Jackson in 2021.

Sadbh herself already has a large group of fans making their way to Dublin to see her on the big stage.

Tickets have been snapped up by family from Waterford and Donegal, her grandparents, cousins, aunties, uncles, her brother Colm Óg and sister Aoife, friends from her school Colaiste Ailigh, her club, St Eunan’s and from her performing arts school Encore stage school.

Sadbh says she is very grateful to all who helped her get to this milestone as her stage career takes off.

“Under the tutelage of Rebecca Thompson at Encore Performing Arts Academy I received great support and skills through dance, acting and singing. The productions are always incredible, and I’m so lucky to be part of stage school like that. They are actually organising a bus from Donegal to see me in Dublin so the support is very real. I also want to give a huge shoot out to the agency iD Talent UK, thank you to Kimberly and Betsy for all the work that they do and for all of their support.”

Sadbh has a busy December ahead, but the schedule has been made more manageable with the child stars being split into three ‘teams’ of 12 so they have breaks between shows. With three performances per day at times this month, Sadbh says the system has been organised well to share the workload among the young cast.

“Also it’s great to have more friends and more people to work with, with three Maisies, three Nells and three Luans, we all bounce off each other and we support each other. It definitely has given me a boost of confidence and I am really looking forward to it.” 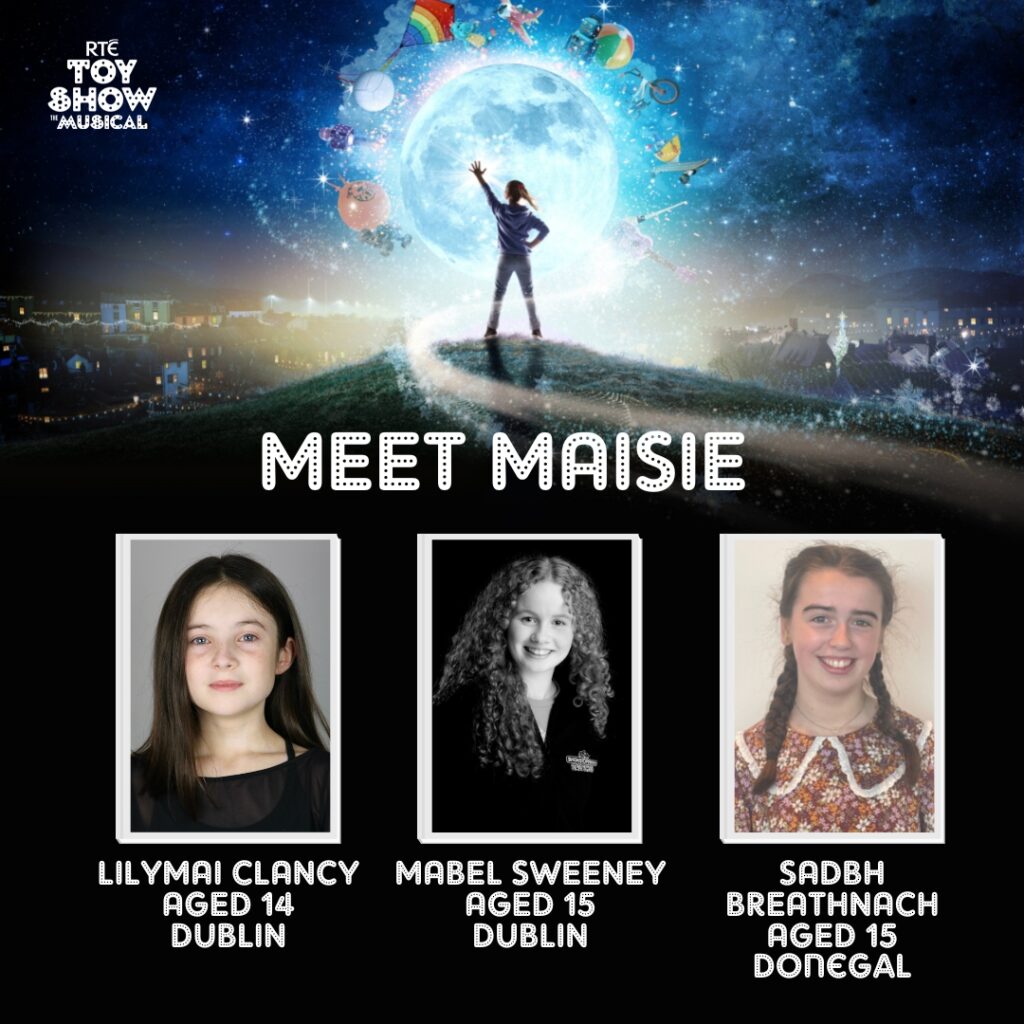 Tickets are in high demand for Toy Show The Musical and some dates are fully sold out already. People are advised to book early to avoid missing out.

“It’s the first time anything like this has been done in Ireland before,” Sadbh said.”There has never been any newly composed Irish musical funded by RTE before. It’s a big step and it’s a new adventure and I’m very lucky to be part of it.”