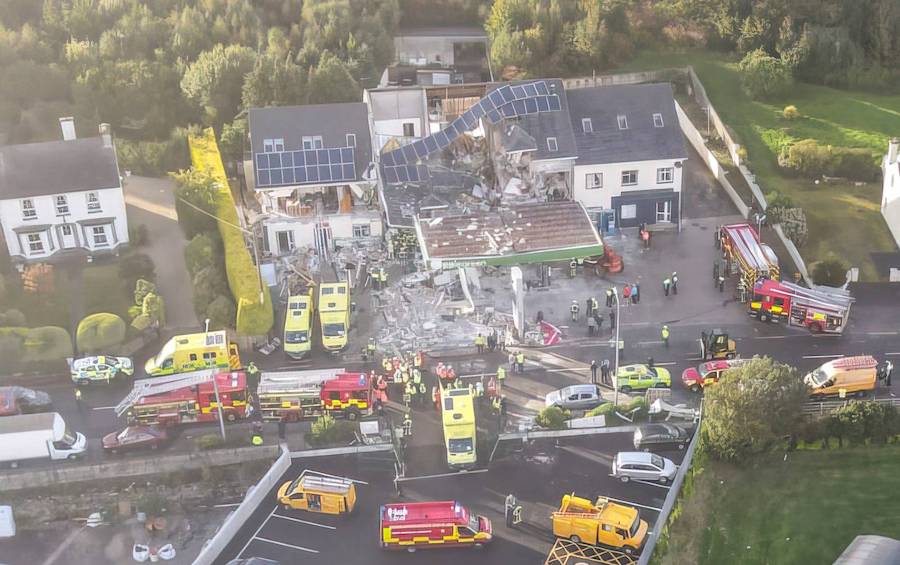 Investigation into Creeslough tragedy “one of the biggest ever”

Detectives investigating the cause of the Creeslough explosion which claimed ten lives have travelled as far as Spain and England to interview people in relation to the blast.

The tiny County Donegal village is trying its best to find some form of normality as it prepares for the festive season.

The village’s main N56 road outside the Applegreen Service Station at the centre of the investigation only recently reopened on November 17th after the horrific blast on the afternoon of Friday, October 7th.

Local businesses have reopened and a new shop comprised of prefabs has also opened next door to St Michael’s Church which replaces the service station which housed the only other shop in the village.

But behind the scenes one of the most intense Garda investigations is taking place to find answers as to what caused the blast.

Specialist investigators continue to work at the scene of the blast while a couple of kilometres away more officers have been sifting through the debris taken from the blast centre.

However, dozens of officers are working behind the scenes gathering information in a bid to build up a comprehensive picture of Creeslough in the hours both before and after the blast.

Det Norske Veritas (DNV), a company that specialises in energy systems is on site as well as crime scene managers from the Garda National Technical Bureau.

Local detectives are contacting and interviewing every person whose name has been mentioned as being anywhere near the village on the day in the hope that they may turn up any shred of evidence which may assist their enquiry.

To date, Gardai have confirmed that more than 500 lines of enquiry have been pursued and more than 300 statements have been taken as well as routine door-to-door enquiries.

Some of those lines of enquiry have taken detectives overseas including one to Spain to interview a person involved in the construction of the building.

Detectives have also retrieved the original planning applications, drawings and files for the premises from Donegal County Council and plan to interview anybody involved in the development of the building.

Some of these people are now deceased but files relating to specific aspects of construction as well as energy systems used in the building and the apartments above are also being reviewed.

A Garda source said “This is without doubt one of the most widespread Garda investigations ever conducted and it has to be. Ten people lost their lives and we need to find a definitive answer to what caused this blast.

“A huge amount of resources and manhours are being put into the investigation on the ground just interviewing people but every detail needs to be examined.”

Local priest Fr John Joe Duffy also spoke of the community’s desire to find answers as to the reason the heart was ripped from this small community.

He said “I think it is important for those who lost loved ones and those who were injured in the blast to know what happened. We all hope and pray that we get an explanation.

“We want to know not only for closure but we want to know to see if we can learn lessons from this and prevent it from ever happening again.

“We are all hoping and praying that we get an explanation and I know that the investigation is huge so it certainly won’t be for a lack of trying. Hopefully the authorities will be able to come up with a reason or reasons as to why this happened,” he said.

Meanwhile, Gardai have said there are no further details or updates regarding the Creeslough investigation since they issued a statement on the reopening of the N56 through the village on November 17th last.

Investigation into Creeslough tragedy “one of the biggest ever” was last modified: November 23rd, 2022 by Staff Writer
FacebookTweetLinkedInPrint