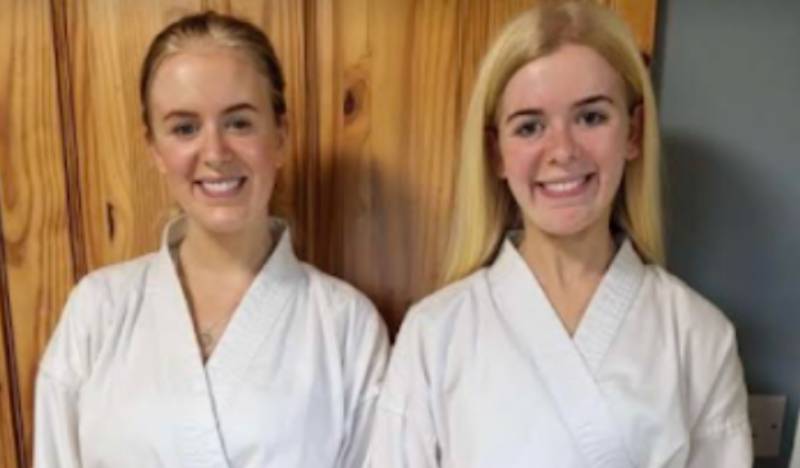 How karate has benefited Megan and Emily both mentally and physically!

Two young women that are members of the Letterkenny Shotokan Karate Club have praised the benefits of karate for strength and confidence.

Megan and Emily Callaghan, who are students in UCD and St. Angela’s respectively, started karate at the beginning of 2022 and haven’t looked back since.

Following increased attacks on women, including the sad event that occurred at the beginning of the year in Tullamore, resulting in the death of Ashling Murphy, the two girls wanted to learn to defend themselves.

Megan said: “Needless to say we were a little apprehensive about starting as we wouldn’t be the most athletically inclined.

“However, we vowed we must give it a go as we wanted to learn self-defence due to an increase in violence around that time nationwide.

“We had previously contacted John to see would his class be suitable and he assured us it would be and we were to give it a go to see for ourselves, so we did.

The two girls say it is challenging to learn and continues to challenge each session, but the challenge has undoubtedly been worth it.

Megan continued: “We liked the challenge posed by the Kumite (sparring) and kata (rehearsed fight sequence) and were very determined.  Over the past year we have learned a tremendous amount, are stronger and it has improved our confidence to no end.

Megan also praised the club and sensei John Wilkie for his commitment and help, and hopes their story will help them see new faces at trainings, adding:“John is fantastic and really helps fulfil the motto of the club as ‘The Friendly Club’. John also did fulfil his promise of the self-defence which he knew was so important to us as we are in college.

“We would encourage anyone to go, those who would like to improve their self-defence skills, those who feel they could do with a confidence boost or just those would appreciate a challenge it really is the best hour of the week.”

How karate has benefited Megan and Emily both mentally and physically! was last modified: November 23rd, 2022 by Staff Writer
FacebookTweetLinkedInPrint