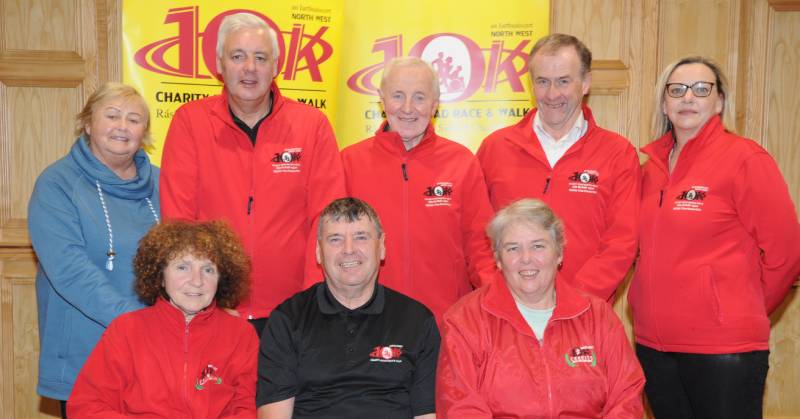 The North West 10k held their AGM on Thursday evening in the Mount Errigal Hotel with two changes in personnel on the Executive Committee confirmed following the election of officers.

Gerard McGinley and Mary Fleming McCrossan have taken up the Treasurer and Minutes Secretary portfolios succeeding Anne Condon and Bernie Brennan who are both remaining on the Committee and are very much looking forward to being part of the team for the 2023 charity event which will take place on Bank Holiday Monday, May 1st.

Gerard is a founding member of the North West 10k and has been heavily involved in event course management for many years.  Mary joined the Committee a couple of years ago and is looking forward now to her new role as they look forward now to supporting more worthy causes in 2023. Just over €900,000 has been raised for 36 charities over the past 25 years.

In his address at the AGM, Chairperson Neil Martin praised the work of the three 2022 charities the Donegal Diabetes Parents Support Group. Spina Bifida & Hydrocephalus Ireland and the No Barriers Foundation who worked so well together and helped raise €66,000.

“Last year’s three charities did trojan work in the lead-up to the event and that reaped its rewards at as each of them got cheques for €22,000. Applications are now open for charities to apply for the 2023 North West 10k and the deadline is the 20th of January. Not alone is there monetary rewards but there is also the public awareness that the charities get from being involved with the North West 10k,” Mr Martin said.

The support of the five sponsors: Donegal Daily, Brian McCormick Sports and Leisure, Century Cinema Complex, the Mount Errigal Hotel and the Value Centre were also acknowledged at the AGM.

“I want to thank our five sponsors whose support allows us a committee to give the maximum possible proceeds to the charities. I want to thank Letterkenny Chamber who have been with us from the start in 1997. Anne Condon has been their representative on the committee over the past 25 years and has done a fantastic job for us providing administrative back-up also doing the Treasurer’s job and I’m delighted that she is staying on as a Committee member.

“Bernie Brennan is stepping down from as Minutes Secretary but again it’s great that she is staying on the Committee. I will want to thank Sergeant Eunan Walsh and the Gardai who worked with us again last year on the traffic management plan for the new Bank Holiday Monday date. The Civil Defence as always were there to deal with any emergencies. I also want to thank the Liam O’Donnell and the Letterkenny Community Centre for providing their facilities for our use on the registration days and for the event itself.”

In 1997 the North West Charity succeeded the Rockhill 10K that had been existence for the previous 13 years.  At the time Letterkenny Chamber President, Patsy Kilgannon from AIB made a commitment that the organisation would look after the administration of the event.

Anne Condon was a Chamber employee and went along to the first meeting in the Mount Errigal Hotel. Charlie Kelly was the first Chairperson and also on the first committee was Gerard McGinley who now succeeds Ann Condon as Treasurer.