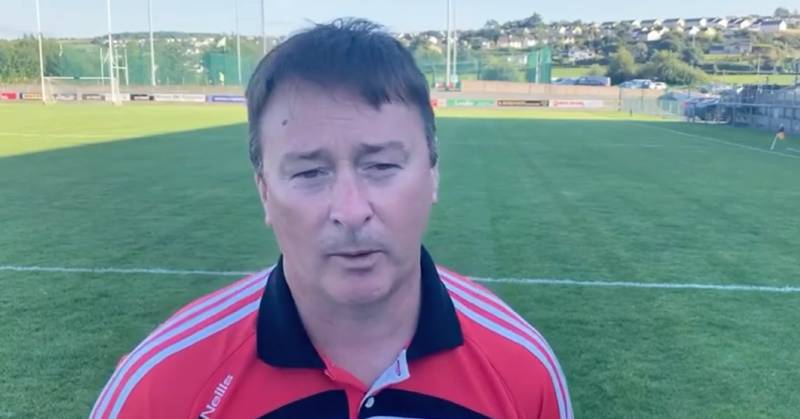 Dungloe beaten in Ulster IFC semi-final by quality Galbally side

Dungloe were defeated by a strong Galbally side as they lost out in the Ulster Intermediate Football Championship semi-final.

The Donegal intermediate champions were seven points down at half time and a fortunate goal early in the second half had Galbally well in the ascendancy.

Dungloe tried to mount a late comeback with the breeze but they couldn’t find the scores needed.

Dungloe struggled from the off as Galbally were clinical with a strong breeze to aid them.

Daniel Kerr opened the scoring while Conor Donaghy’s free had Galbally ahead from early on.

Darren Curran made a great run and point to get Dungloe their first score after 10 minutes but Galbally would pull well ahead soon.

Four points from Christopher Morris, Sean Murphy, Liam Rafferty and a Donaghy free had the Tyrone men 0-7 to 0-1 ahead after 18 minutes.

Oisin Bonner had a goal chance saved by Ronan McGeary but Daire Gallagher’s first score of the game got Dungloe’s second point.

Two great scores from Enda McGarrity with a Gallagher free in between had Galbally six points ahead, and Ronan Nugent score aided by the breeze was the last kick of the half, going in 0-10 to 0-3 ahead.

Dungloe used the breeze to their advantage at the early stages of the second half, with Matthew Ward pointing and another Gallagher free brining it back to five points.

But a moment of misfortune came after Barry Carberry got Galbally’s first point of the second half and Dungloe lost their kick-out.

Nugent won the ball from the kick, and went for a point but it hit off the post and fell to Sean Murphy who was unmarked and easily fired past Danny Rodgers and into the net, 1-11 to 0-5.

Rodgers then made a great save to deny Rafferty for a goal as Dungloe tried to fight back and made the scoreline a bit more respectable.

Gallagher pointed another free and Donaghy replied for Galbally but Dungloe hit four without reply.

Aaron Ward, another Gallagher free, and Ryan Brennan made it 1-12 to 0-9 but when Oisin Bonner’s strike hit the crossbar, it looked like it wouldn’t be a spectacular comeback that they hoped to make.

Dylan Sweeney pointed one more for Dungloe but it wasn’t to be as Galbally would comfortably hold on to the 1-12 to 0-10 win and advance to the final.