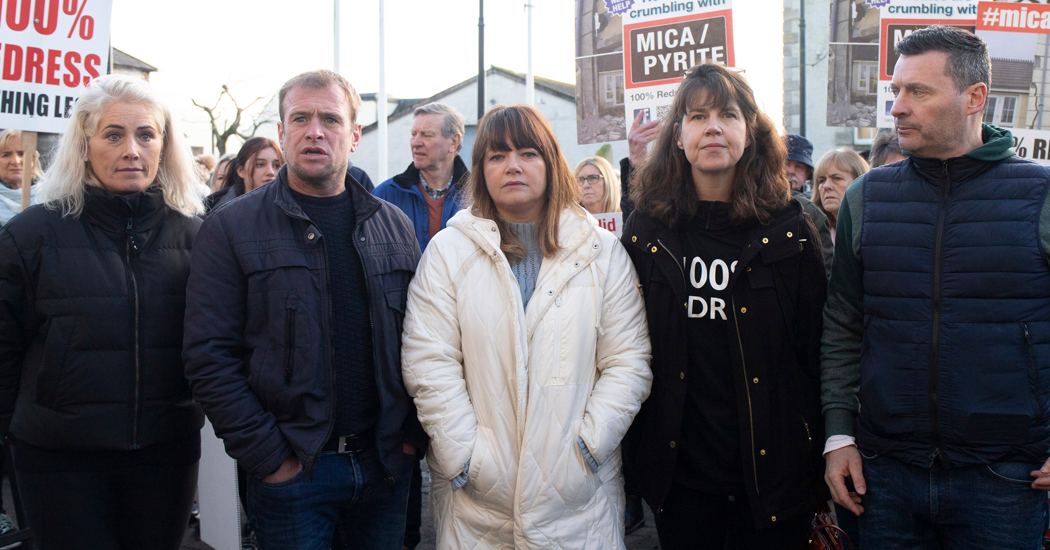 Campaigners tell council to wake up to Mica emergency

A heated protest took place this morning outside the Lifford County House ahead of the council’s plenary meeting for November. Homeowners called for urgent support from the council to address delays to the redress scheme and deliver emergency supports before winter weather strikes.

Five campaigners were invited to speak to the executive and elected councillors inside the council chamber.

Paddy Diver told the meeting that it was unacceptable for people living in 10 condemned houses while they wait for progress on their redress applications. The council has been contacted about the 10 people and provided with their contact details and eircodes, he said.

“Nobody has ever went out to them,” Mr Diver said. “These people are living in houses that are condemned with damp and mould and children living in them. World leading expert Andreas Leeman was in one of them and walked out after 20 minutes coughing. Has anybody in Donegal County Council been in one of them? There hasn’t. Why?” 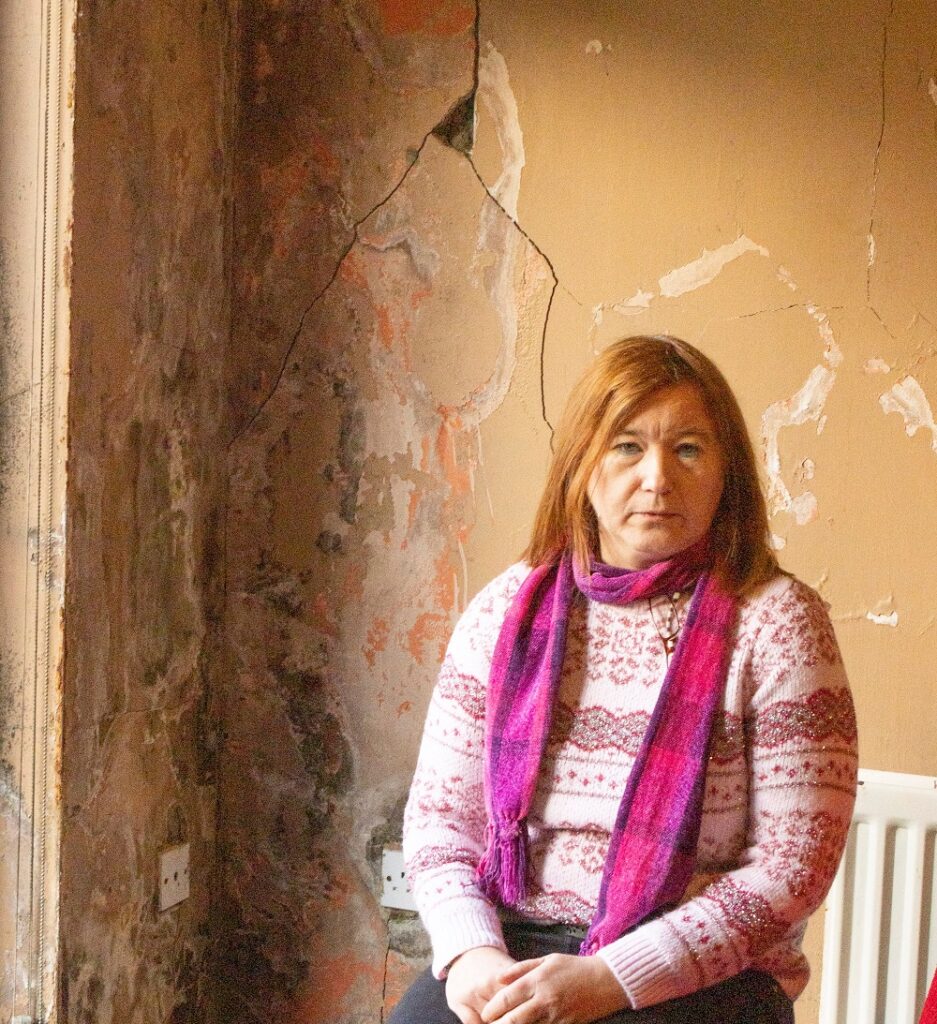 Letterkenny homeowner Sharon Moss in the kitchen of her MICA affected home with moulded walls behind her. (NW Newspix)

Mr Diver told the council he didn’t want written replies to his questions, he wanted action. He also asked why there has been no delivery of modular homes for affected homeowners, why quarries are still operating where enforcement action has been taken, and why the council’s Mica committee meetings have been cancelled eight times in the past two years.

Mr Diver gave the council a deadline to respond and prioritised the worst cases.

“If our demands aren’t met, we are going to have to cross the line, and we don’t want to do that,” he said. 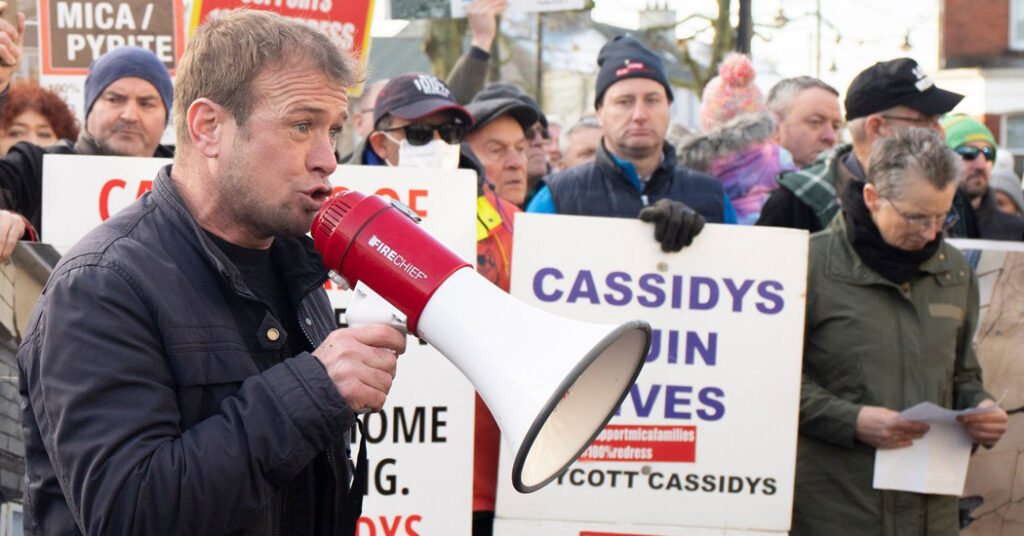 The meeting also heard from Sharon O’Connor from Malin Head, who has seven members of her family affected by Defective Concrete Blocks, including herself.

Ms O’Connor said that her parents, aged in their 70s, are in an unlivable home infested with mice.

“We have blocked holes but mum can’t put loaves of bread in her press. Everything is sitting up high.”

“We are not the only ones, there are people worse than us,” Ms O’Connor said, adding she thinks it’s an “absolute disgrace” that a crumbling home is all that her parents will know. 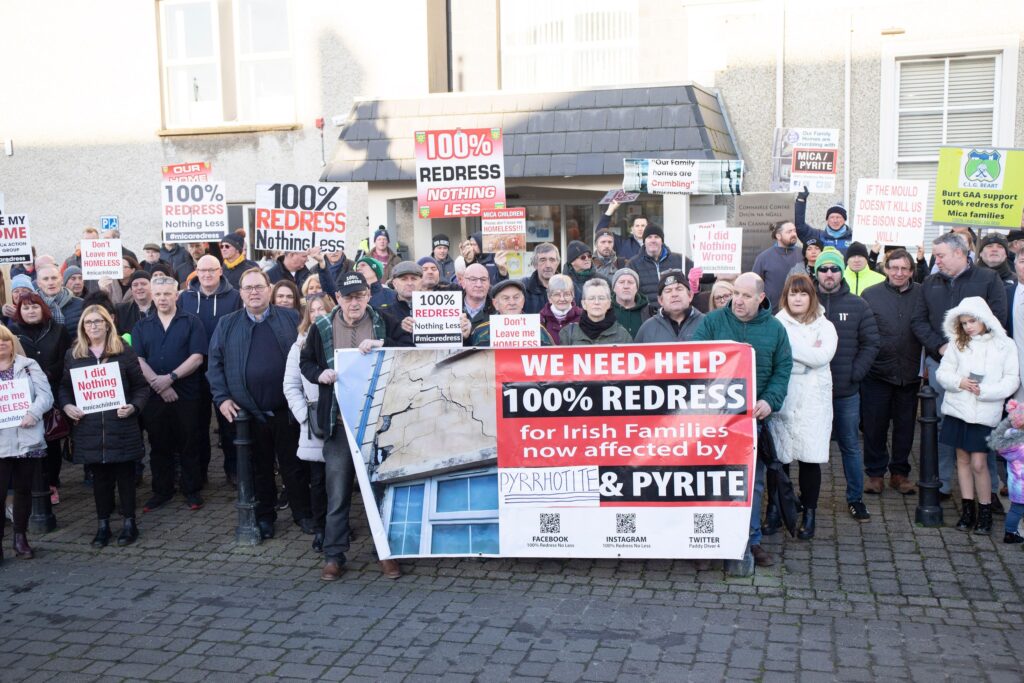 Letterkenny mother Yvonne Shevlin spoke to councillors describing how her redress application was “delayed at every stage”. She and her husband Michael and their two children just recently fled their home as the deterioration worsened. They still have a large mortgage to pay.

Ms Shevlin asked the council: “Have you ever had to leave your home with your children for safety? I had to, nobody would do nothing for us.”

Ray Doherty, a member of the Mica Action Committee said he has reached the stage where water is coming in through his roof. His application has been with Donegal County Council since 2020, he said, while he waits for it to get moved on to demolition. However, when that happens he said he’ll have nowhere to rent.

Mr Doherty said there should be a plan in place for modular homes.

“This is a humanitarian crisis. We are stuck in limbo.” 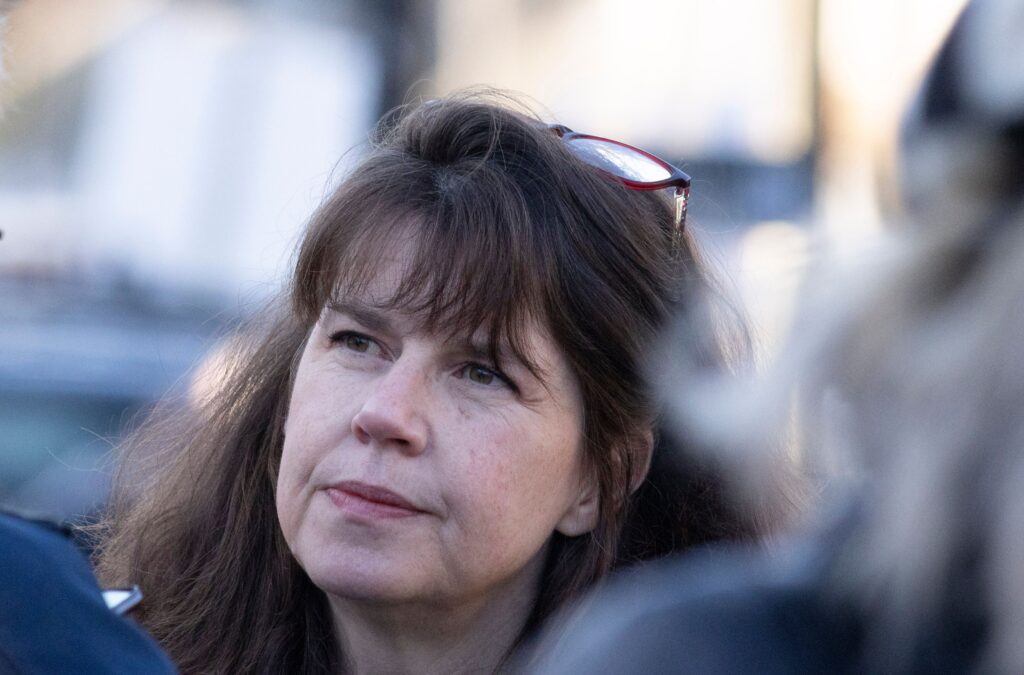 Lisa Hone, Chairperson of the Mica Action Group, listed homeowners’ immediate needs. She called for urgent action on alternative housing or emergency housing funding that will not be deducted from the final remediation allowance of those in the unsafe homes to move. She sought the immediate release of the €20,000 accommodation and storage allowance and the provision of modular homes in Donegal.

Ms Hone pointed out that, with 6,000 defective homes in Donegal, and an average of four people per house, that is 24,000 people that will need shelter in the years to come.

She told the council to “wake up, open your eyes, get the blinkers off and plan for this” adding that if the resources are not there, the council should be demanding them from the government on an exceptional basis.

Chief Executive of Donegal County Council John McLaughlin was absent from today’s meeting. Mr. Liam Ward, Director of Community Development & Planning Services said that the council wants to work on the issue alongside elected members, Oireachtas members, Mica representatives and all impacted families. He has committed to delivering a full written response on the issues raised by Friday of this week.

Mr Ward said: “You deserve this reply. When the issues are set out, and a reply is set out, and where the action needs to be taken, what group, organisation or department and if it’s the council they have to be named where the action or responsibility lies. I think that framework will bring clarity to where the delays are and what needs to happen to move this on.”

“From the executive and the council point of view, we are anxious to work with all the stakeholders involved. We are not interested or want to be delaying the processing of applications or anything that would delay solutions for impacted families.

“The current scheme and the new scheme has to have clarity on where the responsibility lies.”

Cathaoirleach Liam Blaney said he hoped that a way forward could be found from today’s meeting.