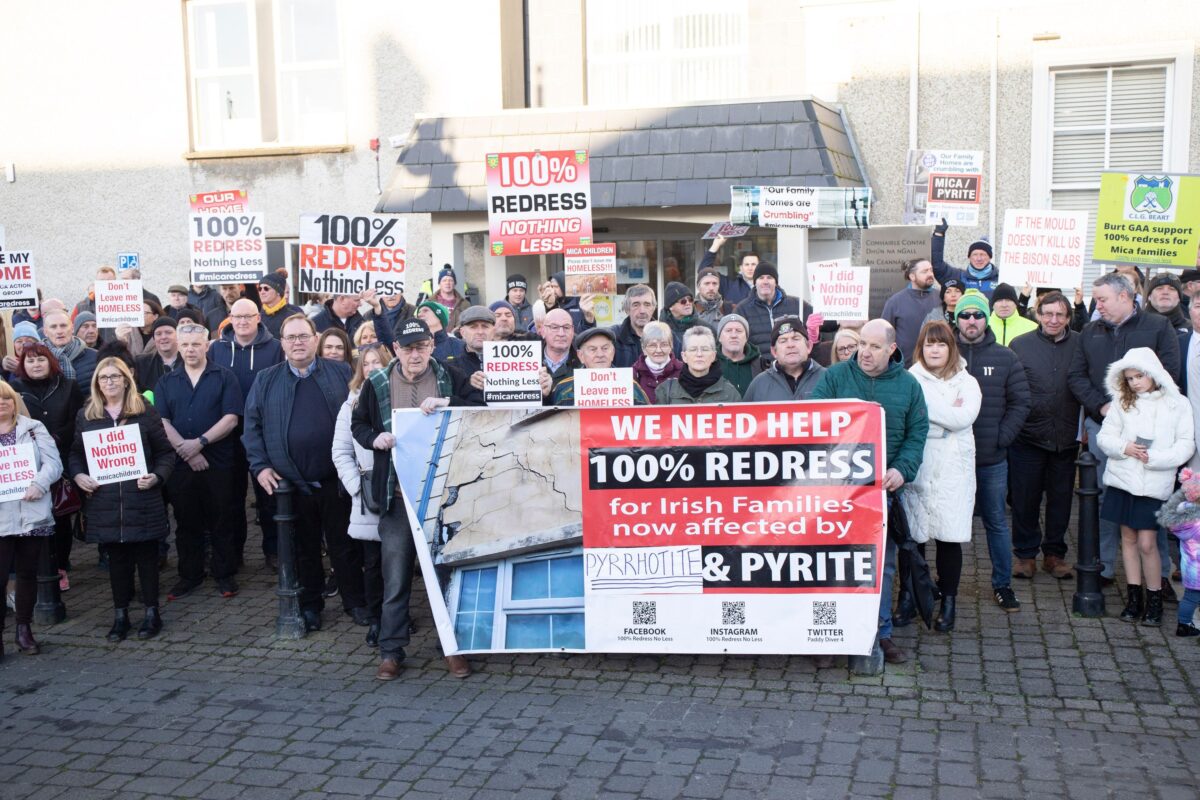 ‘We get it’ council tells campaigners after defective blocks protest

The Chief Executive and Deputy Chief Executive of Donegal County Council say that Stage 1 defective blocks redress applications had been delayed with homeowners’ interests in mind.

The council is beginning to make progress on almost 400 applications that were paused last year due to complexities around emerging test results and technical standards. As the council waited on clarity from the Department of Housing, it decided to pause applications rather than reject them.

CE John McLaughlin and Deputy CE Liam Ward explained the delay and other issues in a written response to the Mica Action Group following a heated protest outside the County House on Monday. Hundreds of homeowners gathered in Lifford to demand action from the local authority on the scheme. Five representatives were invited to speak to the council and delivered a presentation filled with hard-hitting accounts and pleas for help for people in crumbling homes.

Following the meeting, a letter was issued to campaigners on Friday to say that Donegal County Council empathises with homeowners and wants to help.

“Contrary to some commentary, we do ‘get it’ as many of our staff and elected members are affected directly or indirectly by defective blocks,” Mr McLaughlin and Mr Ward said.

“We agreed to get involved in the current scheme because we want to help affected homeowners, and we have taken a homeowner centred approach.

“The placing of Stage 1 decisions on hold last year was done for the right reasons but this is not how it has been portrayed. We are now able to approve some applications that we could not approve up until recently, with 30 approved as of today, and more to follow over the next period.”

The letter called on affected homeowners to refrain from naming council staff officials in public.

“While appreciating the emotive nature of what we are all trying to deal with, the Council does have concerns in relation to a number of issues which has included the inappropriate naming of staff in public, inappropriate commentary on social media, inappropriate behaviour towards staff working in the DCB Office, and so forth,” they said, citing incidents at the meeting and protest on Monday as well as videos on social media.

“This has to stop. This almost led to the County Council suspending work on the scheme in mid- 2021.

“It has also made it more difficult to get staff to transfer into the DCB section who needed to handle increased processing of applications. We do not intend to dwell on this matter at this time, but it cannot be ignored, if it continues. We are anxious to move forward in a spirit of mutual respect and co-operation.”

The letter went on to explain that the council is actively seeking the release of grants for homeowners to pay for alternative accommodation under the enhanced scheme. The council also said that role of the DCC will be greatly reduced on the Enhanced Scheme and the specific role being asked of the Council has not been clearly set out or agreed at this time.

In the meantime, Mr McLaughlin and Mr Ward added that they are open to engagement to help find appropriate solutions and offered the Mica Action Group the opportunity to have a follow-up meeting.

The letter is available to read in full on the Mica Action Group page here. The group said it is working on a response.

‘We get it’ council tells campaigners after defective blocks protest was last modified: December 3rd, 2022 by Staff Writer
FacebookTweetLinkedInPrint