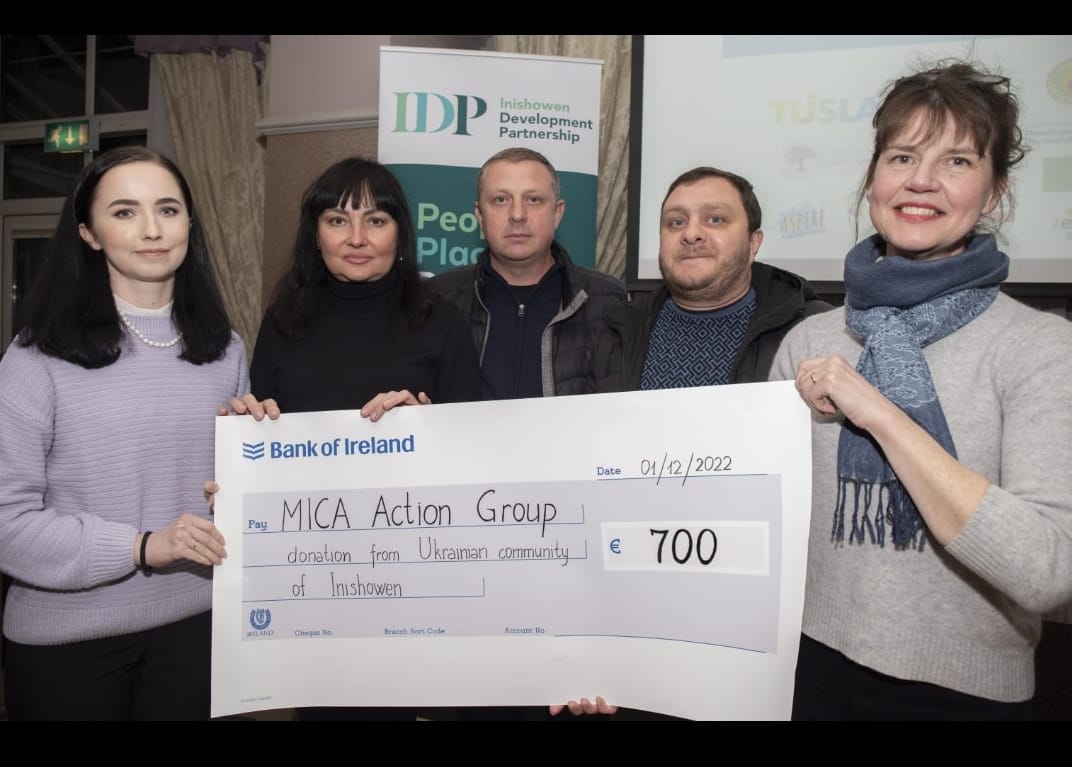 The Mica Action Group has gratefully accepted a donation of €700 from the Ukrainian community in Inishowen.

Refugee families on the peninsula raised the funds through a charity shop in Carn to give something back to locals and to support their campaign for redress.

The presentation was made at the Inishowen Family Action Network Information evening last Thursday.

A spokesperson from the Mica Action Group said: “The families expressed how grateful they were for the kindness they have received since being in Ireland, and wanted to recognise the hardships that they are aware families are having to deal with as a result of defective homes.”

Alina Edel, a Ukrainian Support Worker with Inishowen Development Partnership [IDP] spoke about how the Ukrainian population in Inishowen are very aware of the situations that many families are facing in relation to having defective blocks.

She said one Ukrainian family who had joined her at the mica information night had their house destroyed and blown up by Russian forces in Ukraine and had to flee their home.

She said this has been the case for many Ukrainians and they can relate to the mica families in how it feels having your house crumbling on you.

Despite the empathy they feel with the mica families, Alina said they were reluctant to present the cheque to the mica group in public as they realise this is a very difficult situation for Irish families. However she said they were encouraged to do so at the mica information night and they are glad they did.

“We had just asked for bank details but our Irish friends insisted we come and we are very happy we did,” said Alina.

“The reaction was very nice and warm from everyone. These people have their own problems – they are losing their homes too because of MICA, but they thanked for donation.”

The Ukrainian community raised the €700 for the mica families after they ran a charity shop in Carndonagh in September.

“The local community offered us to run a charity shop in Carndonagh and we were shocked when people started to bring us their donations. It was very heart-warming,” said Alina.

“For many of the new arrivals at this time they left Ukraine in warm weather and with very little belongings – one person had fled occupied territories without anything at all – so we were happy to be able to able to get warm clothes for them.

“Our volunteers worked hard in the charity shop six days per week – it also helped to manage their stress and anxiety thinking about conditions at home – but we also made some additional profit.”

Alina said their community voted overwhelmingly to donate the profit back into the local community, with families affected by mica being number one priority.

“We wanted to give something back to the community – the fact we received profit at all was down to the local people so we felt this was the smallest thing we could do,” added Alina.

“It’s just about human kindness and support. In tough times we should stay strong and help each other.”

Denise McCool, Community Development Team Lead with IDP, said the donation on the night was a special moment and was greatly appreciated by the MAG group, as well as the families watching on that evening.

“It was a poignant moment – here you have people fleeing a warzone and dealing with all the stress that they have to deal with and yet they recognised what’s going on in our community and felt they wanted to offer support and to donate back to our families affected by mica and defective concrete blocks” said Denise.

“I think it was a lovely gesture of solidarity and we were happy to have it shared at the IFAN mica information night.”