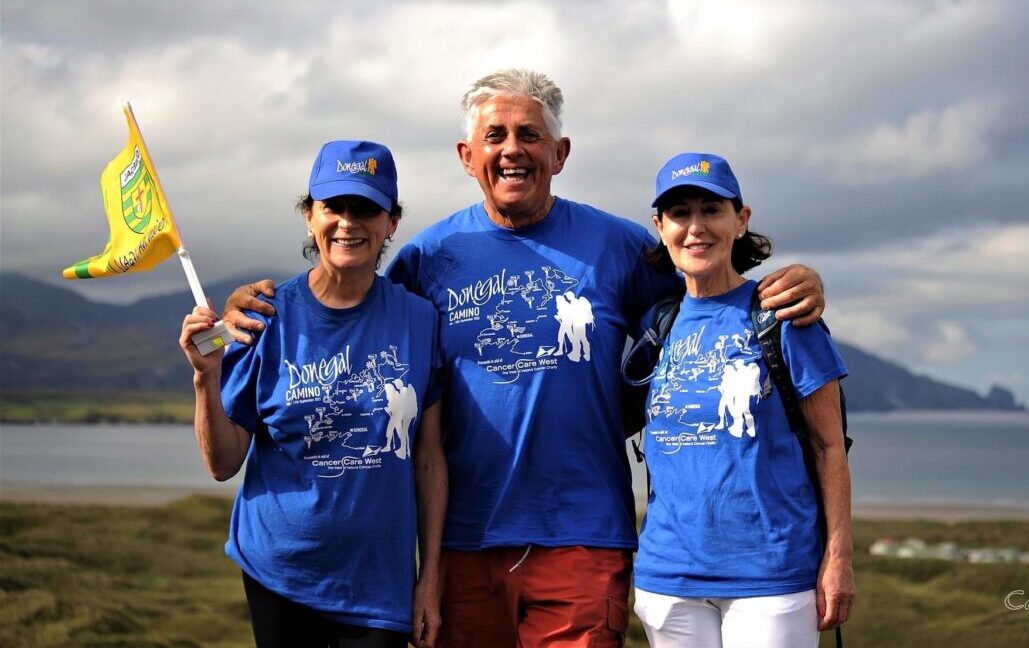 The Donegal Camino is set to return for a third year in 2023.

The week-long fundraising walk is fast becoming one of the most popular walks in Ireland and since its foundation in 2020 it has generated €76,500 for Cancer Care West Services in Donegal.

The 2023 dates are the 3rd to the 9th of September 2023 and details of the route, walks and fundraising plans will be announced in the New Year.

The Donegal Camino is the  vision of  Carndonagh native Peggy Stringer who’s now Dublin based and an active member of the Donegal Association Dublin. Peggy came together with her friends, Donegal Person of the Year, Noel Cunningham and former owner of Harvey’s Point, Deirdre McGlone to create the 7 day hike from Inishowen to Slieve Liag Cliffs just over 2 years ago.

On average 65 walkers joined the walk daily from all across  Donegal and the North West along with walkers from Dublin, the Midlands, Clare, Galway and of course Northern Ireland.  This year also saw walkers from Scotland and North America which highlights its growth. They each had their personal Camino wishes and challenges to undertake over the 7 days while the burning desires of all was to raise money for Cancer Care West in Donegal and experience the unique camaraderie and hospitality of the Donegal Camino.

Guided by Donegal’s John Mc Groary of John’s Walking Ireland and his team of guides Joe Coyle, Denis Sheridan and Michael Devaney, the 2022 Donegal Camino was also supported by many of Donegal’s high profile personalities who took to the highways and bi-ways of their beloved Donegal with vigour. They included singer Mickey Joe Harte who entertained everyone along the Rosguill Peninsula. The Inspiring Guide Dog owner Jennifer Doherty from Buncrana also joined this year’s Donegal Camino while adventurer Jason Black joined the climb of Muckish and shared valuable safety tips from his worldwide adventures with walkers. Altan’s Mairead Ní Mhaonaigh enchanted all on Gabhla island.  The late Fr Quinn from Donegal Town was remembered throughout the week for his walking ambitions and the trails he followed. While Donegal’s strong Celtic Connection with Scotland was also visible on this year Donegal Camino with musicians Seamus O Sullivan and Kieran Hepburn from Glasgow travelling to entertain walkers for the latter half of the week.

“We were blessed with brilliant weather and a wonderful group of walkers from all over Ireland this year, which yet again gives me such encouragement and excitement for the future of the  Donegal Camino,” says Peggy Stringer, founder and visionary of the Donegal Camino. She went on to say, “This was originally a simple idea I had to raise funds for Cancer Care West in my beloved Donegal as a close friend was suffering because of the scourge of cancer. Coming together with Noel and Deirdre has brought the Donegal Camino to potentially be Ireland’s number 1 walking event in the very near future.”

Former owner of Harvey’s Point, Deirdre McGlone says, “Donegal has the most beautiful scenery, the best walking and I’ve always known we have the warmest welcome for our visitors to the Northwest. The combination of these ingredients along with our fantastic hospitality sector has once again shown the beauty and brilliance of Donegal. The Donegal Camino is putting our county on the map for first class walking and hiking and this year saw walkers join us from Milwaukee in the US which is hugely encouraging”.

Richard Flaherty CEO of Cancer Care West, walked with the 2022 Donegal Camino and thanked the organisers for their huge efforts in creating such a successful and unique walking event and for the generous donation. “We are beyond grateful for this magnificent donation of €50,500 from the Donegal Camino. In 2021 the Cancer Support Centre in Letterkenny provided support to over 250 people affected by cancer. All services are provided free of charge and we rely completely on fundraising and voluntary contributions to run the centre. This sizeable donation from the Donegal Camino will certainly bring much comfort to many  of Donegal’s cancer patients and their families in the year ahead.”

The Cancer Care West Support Centre in Letterkenny offers a range of services including Oncology advice & information, individual counselling, Reflexology & Manual Lymphatic drainage. The centre operates on both a drop-in basis and also an appointment basis.

The organisers of the Donegal Camino are extremely grateful to all those who participated in this years walk making it such a success. Sincere gratitude and appreciation is also expressed to those who volunteered of their time, made donations along with the wonderful partners who supported the successful walk including Gallagher’s Bakehouse, Harvey’s Point, Vodafone Donegal, Kieran and Jacinta Kelly, Sliabh Liag Distillers and Dúlamán, Mulroy Bay Gin and Póitín, Donegal Airport and state agencies Údarás na Gaeltachta  and Fáilte Ireland. Gratitude is also expressed to Carndonagh Brass Band, Lorna Henry and the Inishowen Honora Choir and the Mc Nelis Cunningham School of Dancing’s Cian Mc Ginley, Ciara Mc Kelvey and Ellie Campbell and artist Sinead Smyth who will compete in the World Championships in Canada in 2023.

Such is the support and enthusiasm for the Donegal Camino, that the committee are already hard at work planning the 2023 event which will take place from the 3rd to the 9th of September 2023. The Donegal Camino organising committee includes Peggy Stringer, founder and visionary and owner of Monkstown Skincare Clinic, Donegal Person of the Year, Noel Cunningham, Deirdre McGlone owner of Le Moulin Sur Celé in France and former owner of Harvey’s Point and Noreen D’Arcy, D’Arcy Marketing & PR, Galway who’s strong Donegal Connections.

Stay tuned to Social Media and the website www.donegalcamino.ie for launch details of Donegal Camino 2023.

Save the date for Donegal Camino 2023 was last modified: December 6th, 2022 by Rachel McLaughlin
FacebookTweetLinkedInPrint