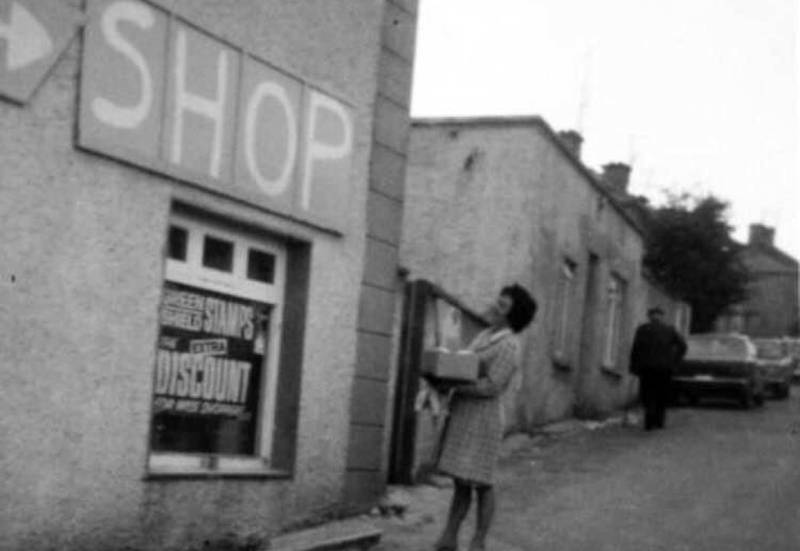 “It was built with a single block-but a good block”, this may sound like a present day saying but it’s one that we heard from years ago at the foot of the town.

One often said with pride by my Auntie B. She was a person with amazing belief which carried straight through from her belief in God to her belief in her family and what they set out to do in life. Don’t get me wrong, if Auntie B thought something was wrong she would be the first to voice her opinion but after that she was always on your side.

The single block that she talked about was the way the shop her family built at the foot of the town was constructed, as was her home which originally was the garage and store for the shop, and was converted to her home for the last 40 years of her life built on the Back Road.

The Coyles cut into the hill at the bottom of the back road when they decided to take the plunge and built a completely new shop and home at the end of the 1940’s.

They started off with a wee shop in the front room of 19 Ballymacool Terrace where they lived before moving the shop to a rented room in a thatched house next door to the forge on the corner. 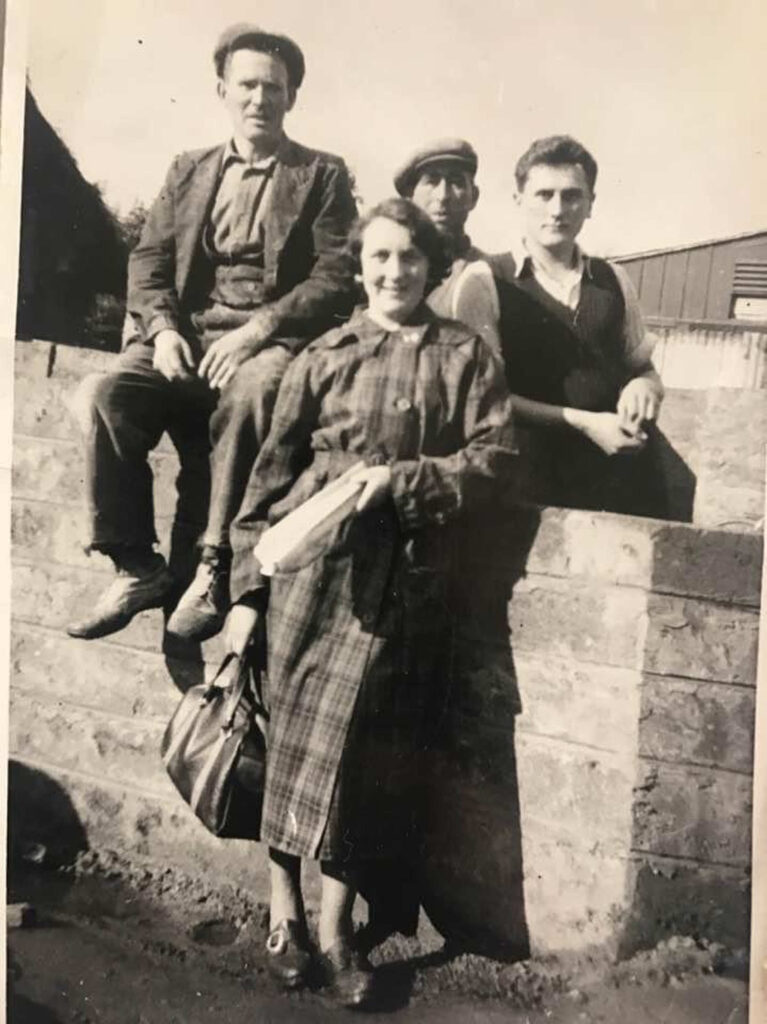 Brother. and sister Margaret and Hugo Coyle get the picture taken along the single block wall of Coyle Shop with the builder in the 1951.

The rust from the paper clip has made its mark on these old faded pieces of paper that it has held together over the last 72 years. Auntie B held on to the track of keys of a manual typewriter and hand writing includes the names of the people from Letterkenny involved in building  one of the shops familiar to people growing up in Letterkenny.

These old planning permission documents issued to William Coyle Ballymacool Terrace are for the erection of a new shop and dwelling house at the junction of the Back Road and The Slate Row at Lr. Main Street.

William Coyle would have been 62 when he applied for this planning in 1950. He retired from the Irish Shell in 1948, then started selling clothes door to door around the countryside with an Old Ford Van. Now the shop that all of the family helped out with needed to be extended. 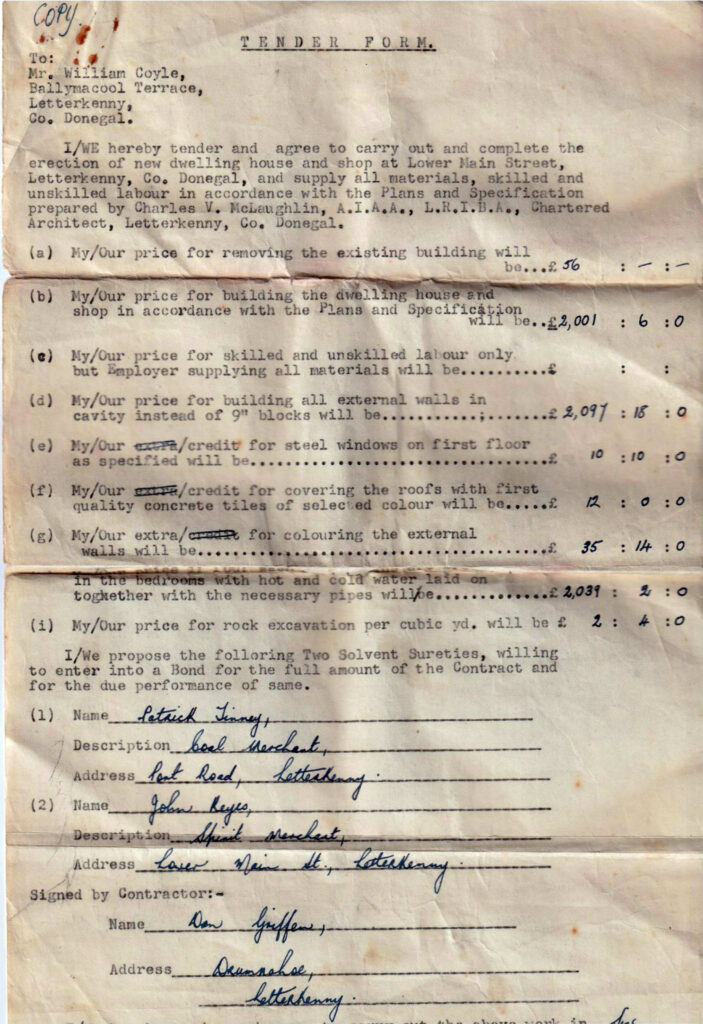 The Tender Form for the Shop and House of William Coyle with local business men Patrick Tinney and John Keys going guarantors for him in 1950.

Charles V Mc Laughlin A.I.A.A, L.R.I.B.B Chartered Architect. (known locally as CV) drew up the plans for the house and shop at the corner. Griffin & Doherty Drumahoe were the builders that were named on the contract to take on the job.

The price agreed to build the house and shop at a meeting on 14/8/1950 came to the princely sum of £2,001 and 6 shillings! Additional costs include £56 the price to demolish and remove the old thatched house at the corner that once housed their old shop. £2 and 4 shillings was the cost per cubic yard for rock excavation.

Other options were an extra price of £97 and 18 shillings for building the external walls in cavity instead of the standard 9 inch single block. Steel windows on the first floor instead of wood was an extra £10 and 10 shillings.

And for £12 extra you could get first quality concrete tiles rather than the standard slates.

According to the plans, the house had four bed rooms and had an option price of supplying a wash hand basin with hot and cold running water in the four rooms for £39! 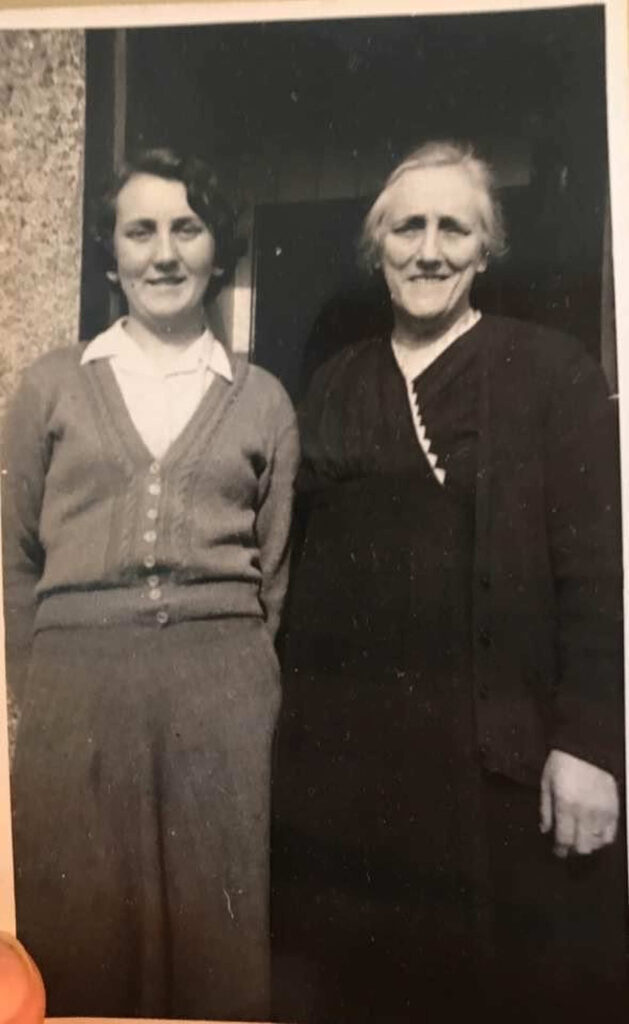 Margaret and her mother Bridget at the front door of the family home over CoyleÕs shop at the foot of the town.

In the final letter drafted up in March of the following year, a note added to leave out the 4 wash hand basins!

The final part of the document included the names of two Solvent Sureties to enter into a bond for the full amount of the contract and for the fur performance of same.

Patrick Tinney, Coal Merchant, Port Road Letterkenny and John Keys, Spirits Merchant Lower Main St. was the other. Both in business in Letterkenny and both prepared to go garniture for William Coyle. 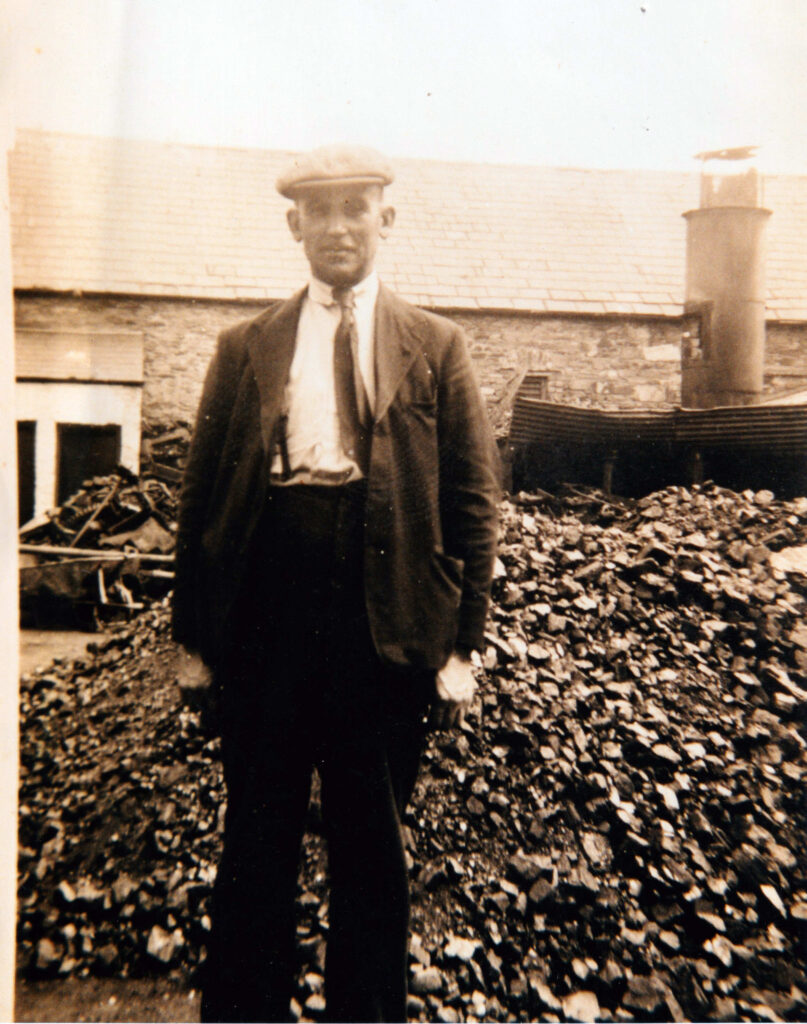 Patrick Tinney pictured at his coal yard in his younger years which was down in Brownes Old Foundery at the Foot of the Town in Letterkenny. Where the Skittles alley and carpark are now located.

Danny Griffin is the final name representing the builder that put his name to the contract. The new house was completed and the shop was opened in 1952. Seventy years on and the shop and the main part of the building is much the same but over the years the shop went through many changes. It had four owners after the Coyle family sold it in the 1970’s including Brendan Proctor, Louis Cassidy, Jason Black and its present owners, the Kernan’s Group.

‘The single 9 inch block, but a good block’ as Bida described it, still carries the shop and also supports where internal walls were removed as the shop area has completely taken over all that was once a family home.

And I’m sure it would take more than a hundred feet of 9/1 inch shelving in there now from what it started out with all the years ago. 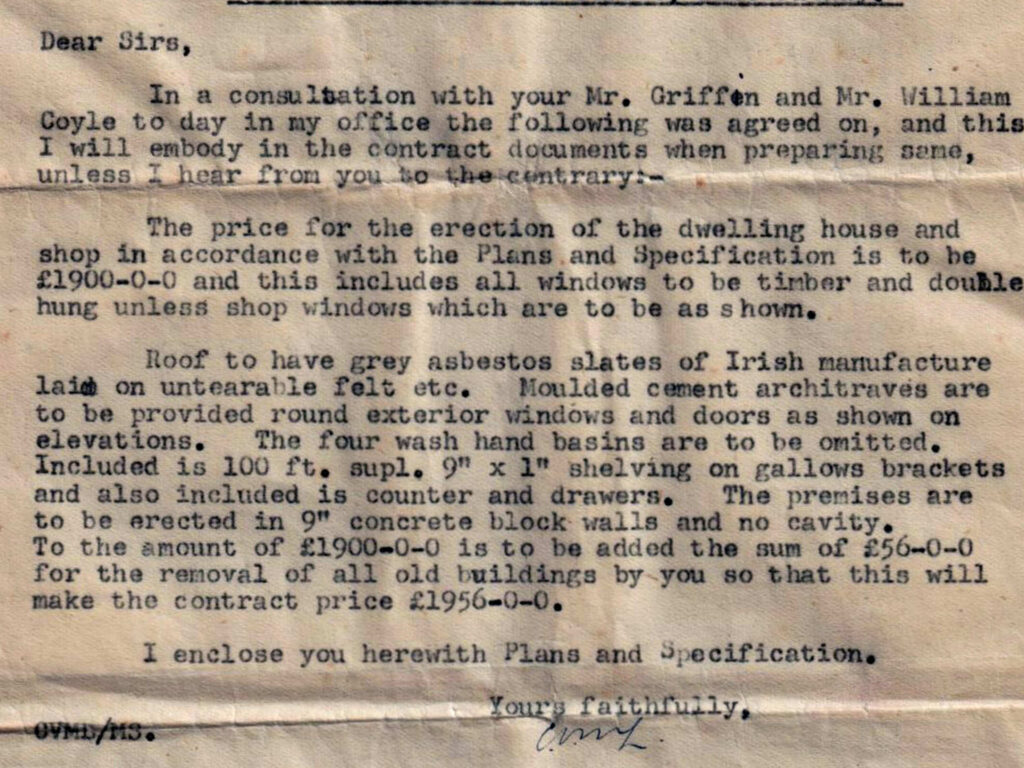 The details of the building of the William Coyle Shop.Shop including single 9 inch blocks and 100 foot of 9/1 Timber for the Shelving counter and drawers.

Auntie B telling us about a shop built with single blocks and finding this old record of her family’s business and in a way the people like Paddy Tinney and John Keys, who were single blocks in their own right, made up the old Letterkenny themselves. Who would believe in another single block starting out Willie Coyle to back him in the bank and help him on his way.

Patrick Tinney started out in the coal business when he bought Browne’s Old Foundry at the foot of the town in Letterkenny, where he delivered coal around the town starting off with a horse and cart.

He called his horse Nora and they were a familiar sight around Letterkenny, the old foundry was straight across for the first shop where the skittle alley is now, across from where Willie Coyle and his family started business in the old thatched house. 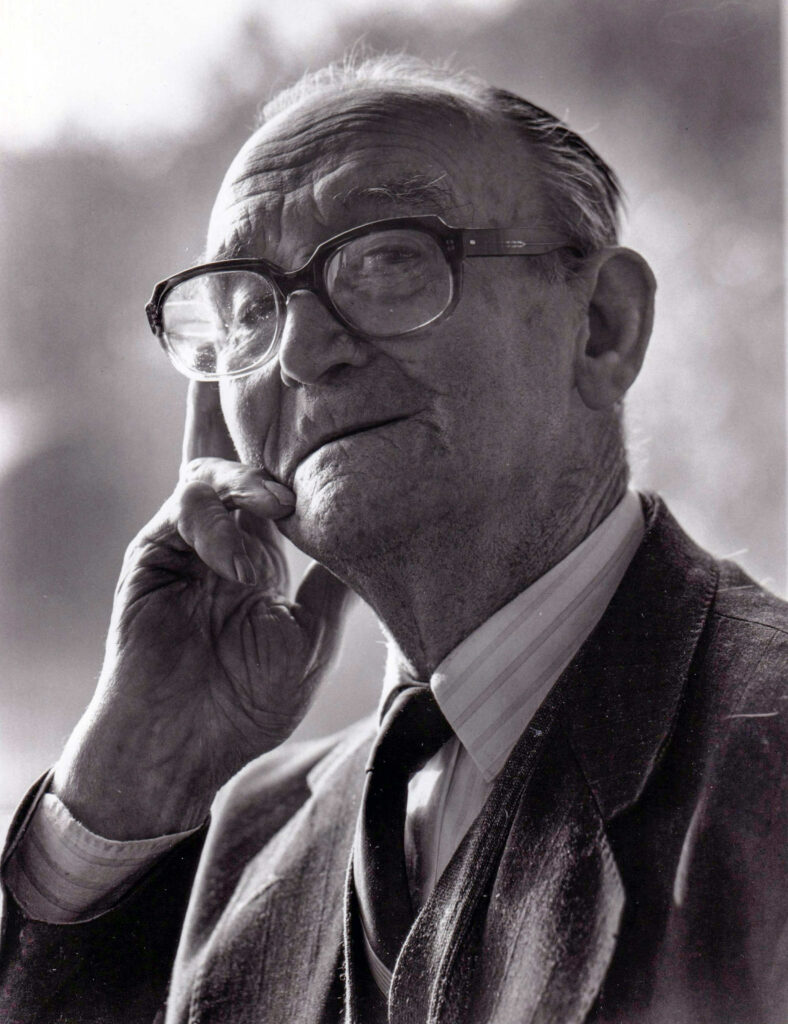 The hands tell the story a picture of Patrick Tinney in later years with hand that work hard all his life.

One of the pictures we have is of Patrick Tinney standing in the middle of his coal yard in the old foundry with the roof and building of Roulston’s yard in the background. Patrick Tinney’s image is a great image of the business people of that era that served the community of Letterkenny all those years ago.