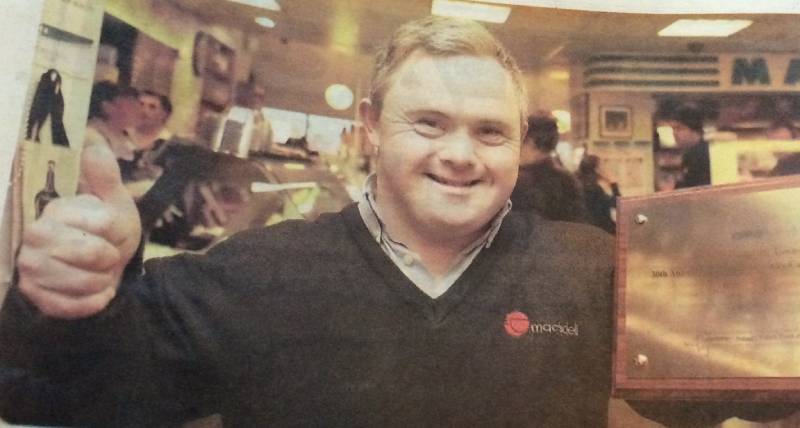 Looking at the cold drinks fridge at the front door of Macs on the High Road in Letterkenny this week and the thought crossed my mind that this was probably the last place I had a wee chat with Ronan Roddy.

He would be restocking the drinks display, everything from Fanta and Irn Bru to still and sparkling water.

I say chat but in recent times Ronan would just give you a lift of his eyebrows to say hello.

When Ronan was in better form there was a good chance you would run into this popular member of staff,  be it at the back of the car park where he looked after getting packaging packed up for disposal, or out on the shop or cafe floor where he would be giving a hand to clear the tables.

It is hard to believe that Ronan worked in Macs for 26 years; he was the longest serving member of staff at this busy shop and deli on the High Road.

Ronan started on work experience one day a week and as his school years finished, he was kept on.

Like myself, Ronan looked forward to the wee breaks and it was there that our paths first crossed. Ronan would sit a table away from me on his break but near enough to drum up a bit of a conversation.

Mostly our conversation would be about football, Finn Harps and Finn Park in Ballybofey. He would always keep me up to date of who they would be playing next or if they would be at home or away.

Both of us worked at Finn Park on home match days. Ronan helped out as a steward in the grounds and I worked for the Donegal Democrat as a photographer covering the games. When Ronan donned the hi vis coat in Ballybofey, he took the job that was asked of him very seriously.

As time went on, one of his duties included going out to the middle of the pitch and walking the referee and his officials off the pitch at half time and full time.

I regularly would sit in the same place not far from the club house gate, inside the wall of the pitch and on wet winter nights in a soaking pitch the concrete base of the floodlight pylon was dryer to pitch my seat and camera gear.

On so many nights I would  fire off a couple of frames of Ronan walking the ref off the pitch at half time, but try as I did this week I couldn’t come up with an image of Ronan as I remember taking them.

They are in there somewhere in the original photos and sometimes the harder you look for something at sad times like this, the harder it is for you to find it.

At half-time we always looked forward to the cuppa hot tea and a biscuit to warm you up on a winter’s night in the club house in the old days. Two gates did two jobs at Finn Park, they close off the grounds from the public when the match was on then at half time when they were open in the different way as they provided a passageway for the players and officials to safely make their way to the dressing rooms, then photographers and reporters could follow them up into the club house for the much needed cuppa.

When Ronan took over the duty of the gate and security was stepped up a bit at the pitch I assumed that he wouldn’t turn away his friend like me from his day job in Letterkenny in Macs, but as I gathered up my seat and camera gear and headed for the tea, I was soon to find out that Ronan was going strictly by the book and landed at the gate to find Ronan had it locked and wouldn’t let me up to the club house!

The lockdown only lasted for a few moments as Ronan waited until the match officials were in the club house then he would give me the nod that he was letting me in.

He took his job at Finn Park very seriously but knowing Ronan there was always a bit of devilment in him and he would do it to see my reaction.

He always would have a spare team sheet in his pocket that he would give to press men like myself sitting along the touch line.

There are two photos of Ronan Roddy that sum up this young man I have known for the last  25 years.

The first one was taken on one of the wettest nights in Finn Park where the home side took on Shamrock Rovers.

Ronan is wrapped up in his orange Steward’s coat and a Finn Harps hat looking down the line in through the driving rain. 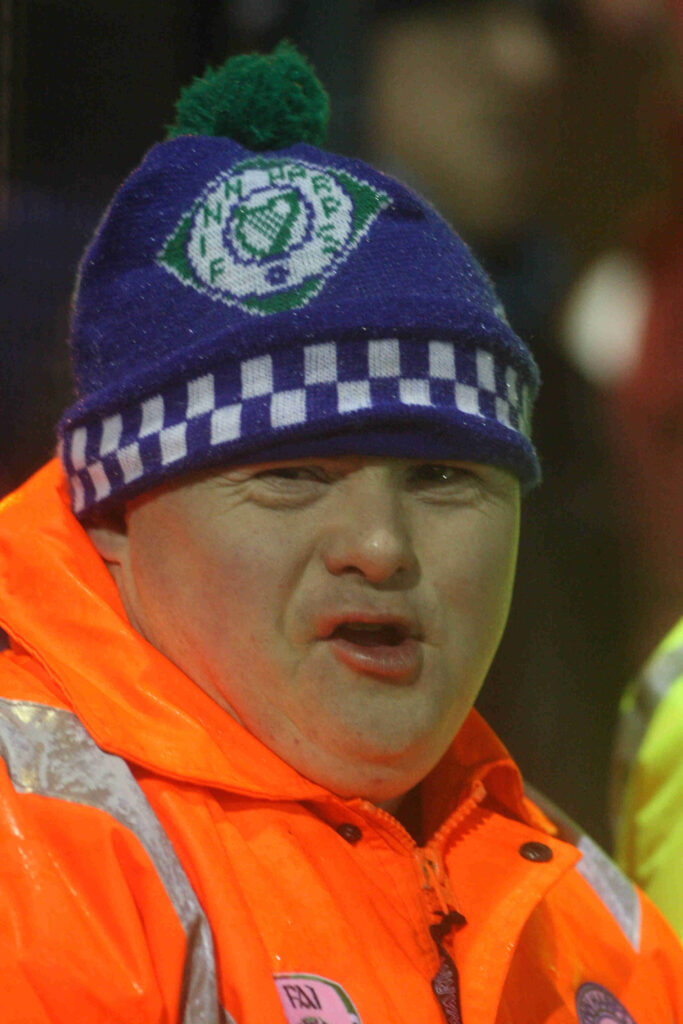 He had a job to do for the team and the club and he did it with pride come rain or shine. In this photo he is celebrating harps putting a goal in the net against the hoops.

The second photo is one that Ronan took himself in Macs around Christmas time at a customer’s appreciation day.

That morning I took a camera in to take a few photos and Ronan was watching me taking them. I gave Ronan the camera, put the camera strap over his neck, showed him how to hold the camera, where to look through the viewfinder and showed him where the shutter button was.

Ronan was up to speed right away, and we took a picture of every table that morning of customer’s enjoying a cuppa and a chat.

One of the photos that Ronan took that morning captured a group, but also in the very corner of the photo he captured both of us in a mirror on the nearby wall. 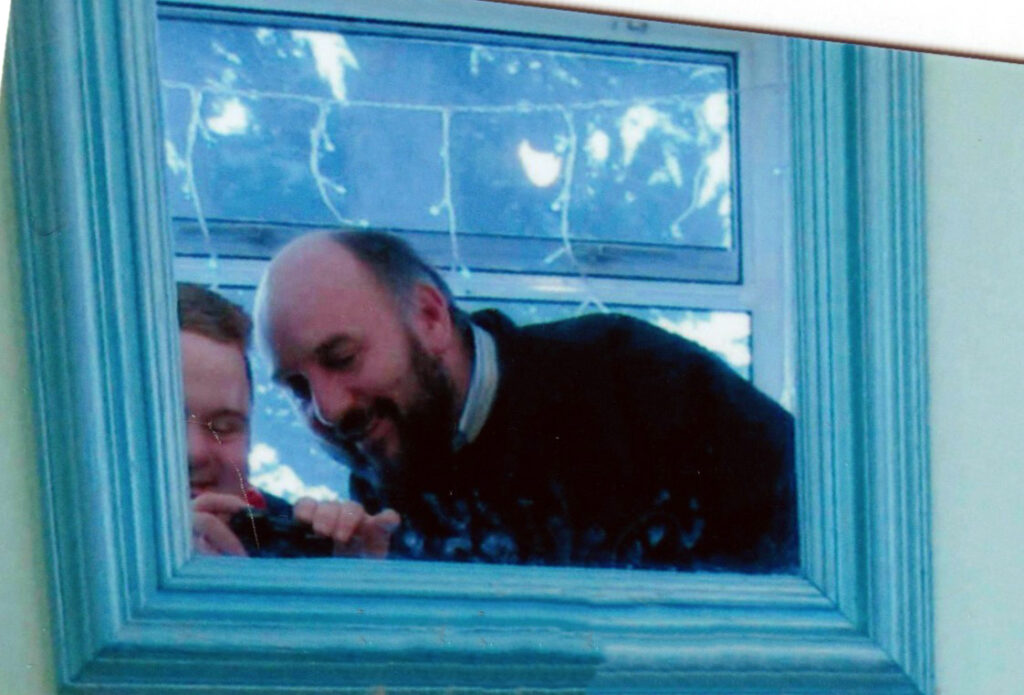 Capturing the moment and a reflection in the mirror in Mac’s on the High Road. Photo By The late Ronan Roddy.

Normally a reflection of the photographer like this in a photo would be something I would always try to avoid, but these last few days that capture by Ronan is a timeless moment in the mirror reminding me of the great times.

From all the witty one liners that Ronan would come out with, and the pure bit of craic were were enjoying that morning as we both looked through the back of the camera to see what kind of a photo Ronan took.

Ronan captured the moment in a way that only Ronan could. Over the years I have taken many photos of this young Stranorlar man, at Finn Park, representing Macs from receiving awards to supporting charity balls, landing at the Silver Tassie donned in a dickie bow and black suit like James Bond posing on the red carpet, hand casually in the trousers pocket. 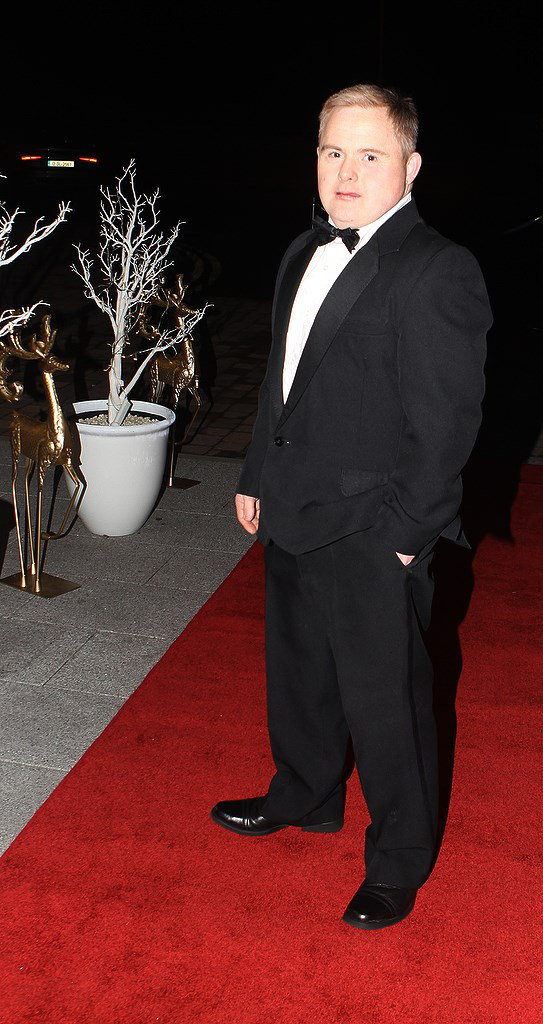 He participated in sporting events for Mac’s, in the inter firms game at the Letterkenny community centre. Ronan made his journey every day of his working life every morning on his own by bus from the twin towns to Letterkenny and then would walk up the hill to Macs on the High Road with his wee backpack to start his day. 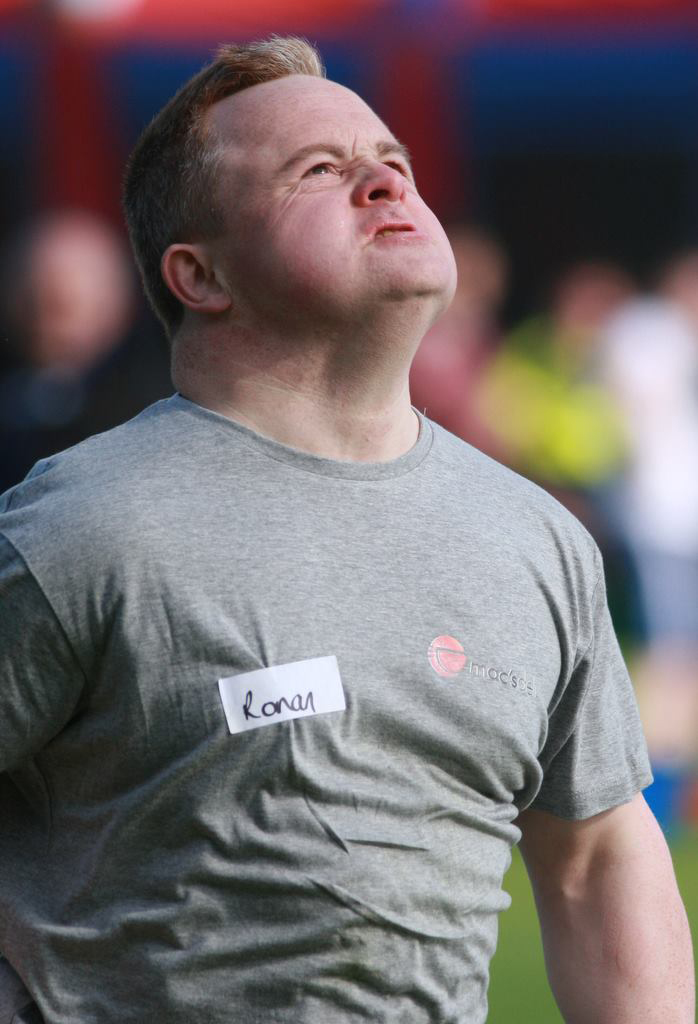 It was more than a bus journey; it was a part of a daily routine that his parents encouraged to make Ronan an independent person.

I felt bad the odd very wet evening that I gave him a lift down to the bus but over the days of his wake we were to learn that a taxi driver from Letterkenny did the same. I went over to the Twin Towns to tell the story that Ronan would on occasion get a taxi from the bus up to the High Road but made sure that he would stop where Eunan Mac wouldn’t see him and maybe tell his parents Phil and Pauline.

I feel very privileged to have known Ronan and very proud to be able to call him my friend, he will be very sadly missed. 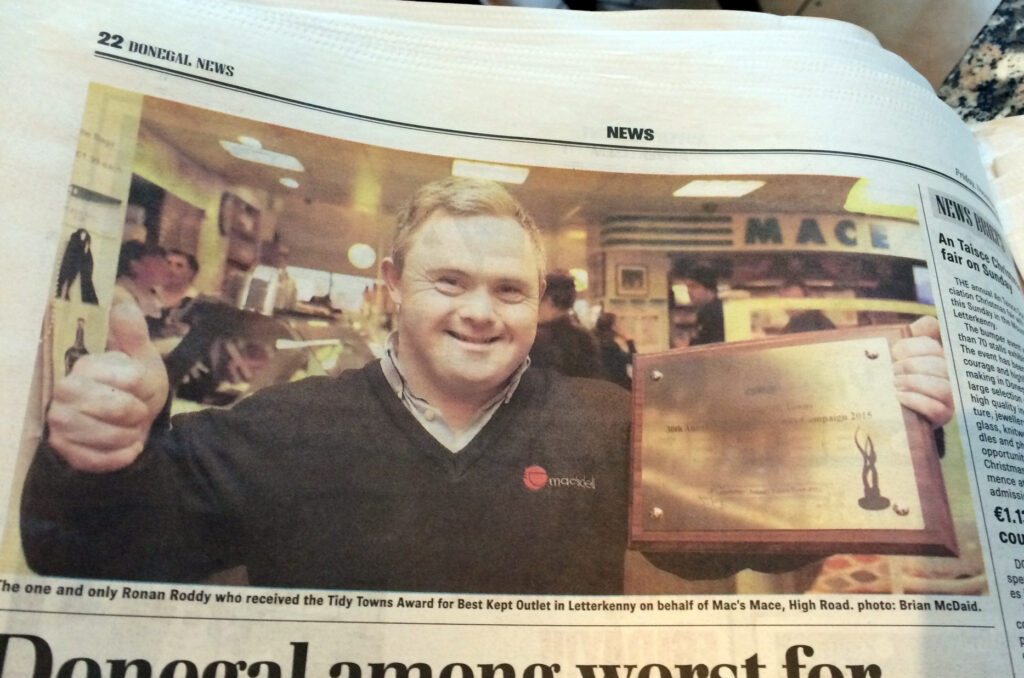