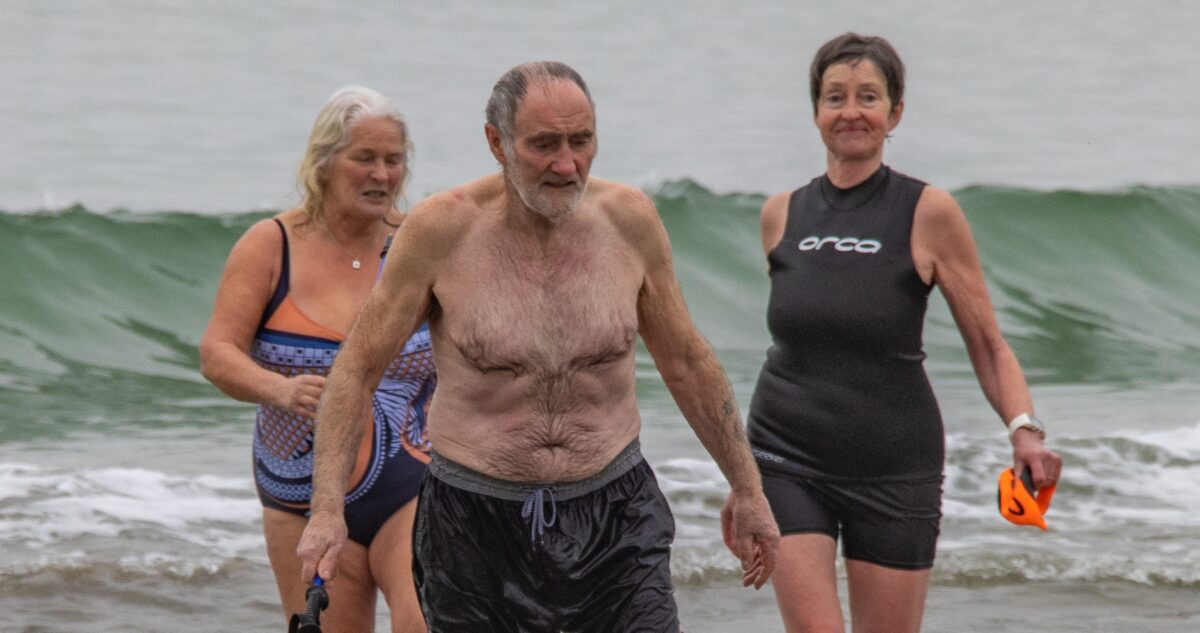 Arranmore Islander Paddy Conaghan is making waves along Ireland’s coastline this winter on his second ‘ducking and diving’ around Ireland challenge.

The 82-year-old sea swimmer has set out to get into the water at as many beaches as he can around the Irish coast to raise awareness for local mental health services.

Paddy’s clockwise adventure began on 4th December and he is aiming to be home to Arranmore in mid-March.

Last week, Paddy was joined by some great supporters in West Cork, who shared this story with Donegal Daily:

The Old Head of Kinsale is one of Irelands best known lighthouses and is also the starting point of the Wild Atlantic Way from the southern side.  It guards Courtmacsherry Bay and the many inlets around The Seven Heads area that stretches from Courtmacsherry towards nearby Clonakilty. History tells us that Captain Turner of, RMS Lusitania, had sailed through heavy fog off the south coast of Ireland on the faithful day in May 1915. To check his navigation, he came closer to shore than normal and would have used the Old Head lighthouse to the east of him and the Galley Head lighthouse to his west to plot his course and speed. The German submarine U20 was in the area and 1,200 souls were lost. One of the rescue boats that responded that day was the Courtmacsherry lifeboat, the crew rowed the 12 miles to the scene as their boat had sails and the day was calm so muscle power took them to the scene.

Courtmacsherry is one of the oldest lifeboat stations in the country and last weekend was a special celebration in the small coastal village. They received the latest addition to the RNLI fleet, the Irish designed and named after the Irish river, the Shannon class lifeboat.

Paddy Conaghan, aged 82 who is travelling clockwise around Ireland this year raising money for different charities and amongst those set to benefit are the RNLI. It was fitting that Paddy was at hand to witness the arrival of fleet number 13-45, “Val Adnams,” to Courtmacsherry last Sunday. The lifeboat was escorted to the pontoon by the current lifeboat on station, “Frederick Storey Cockburn” a Trent class boat that has served the area well. Paddy was on the pontoon along with members of the shore crew as hundreds of people lined the pier to witness the mooring of the boat. 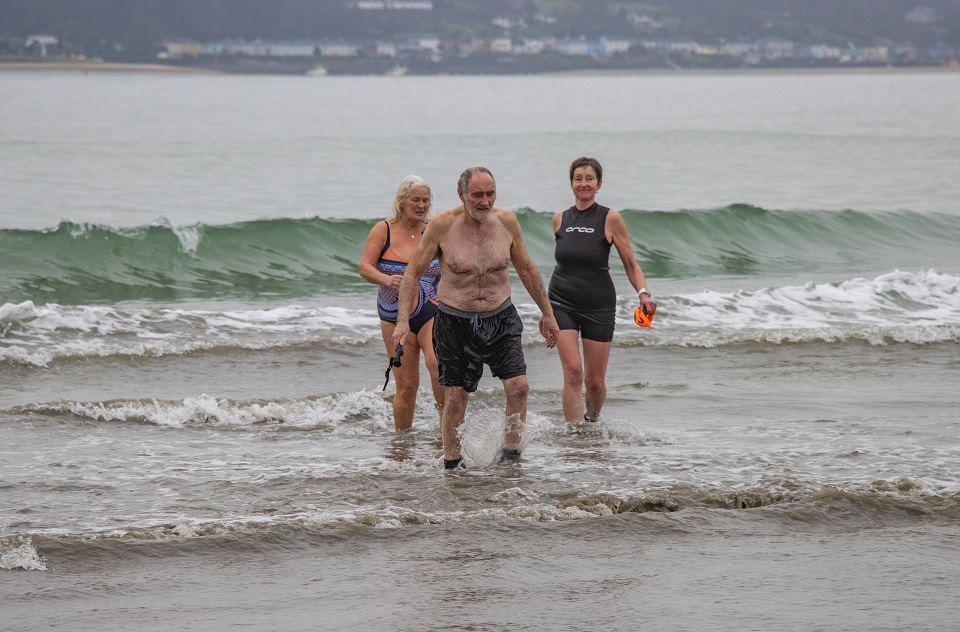 The first beach travellers encounter on their south to north trip of the Wild Atlantic Way is Garrylucas beach followed by the nearby Garretstown beach.

This morning Paddy Conaghan, aged 82, had swam at those locations before going to the rural Howe Strand beach where he was met by children from the local Gurraneasig National School. Moving westwards along the inner bay he was accompanied by his companion for the day, Donegal native, Bernadette Gallagher who hails from Burtonport and now resides near Lissarda, Co. Cork. 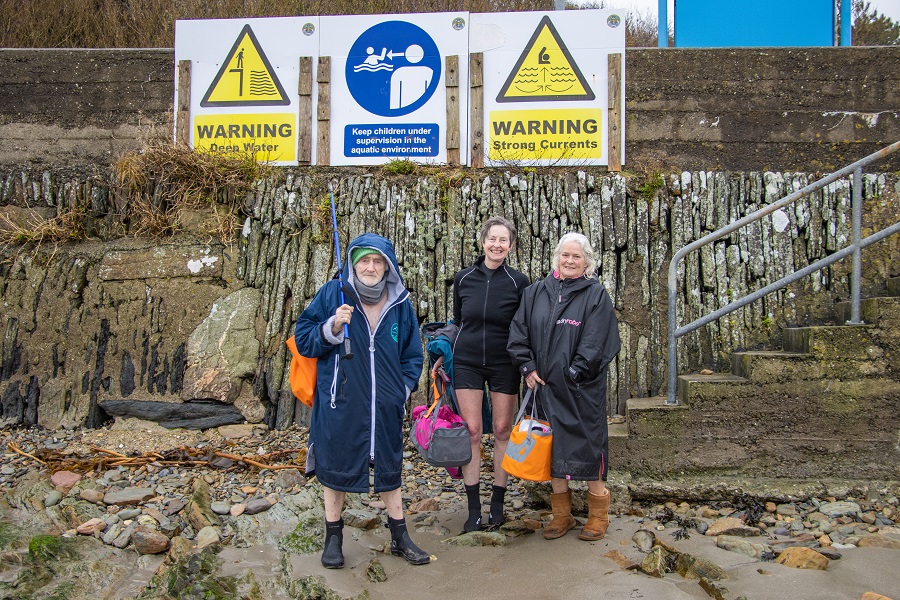 Susan Nicholson took to the water with Paddy and Bernadette on two dips this morning, Howe Strand and Coolmain Beach. After their dip they continued along the bay to Courtmacsherry and Broad Strand for yet another dip before they took a break for lunch.

A brief stop at the 13th century historical ruins of the Fransiscan Abbey at Timoleague before reaching Courtmacsherry for a photo opportunity. 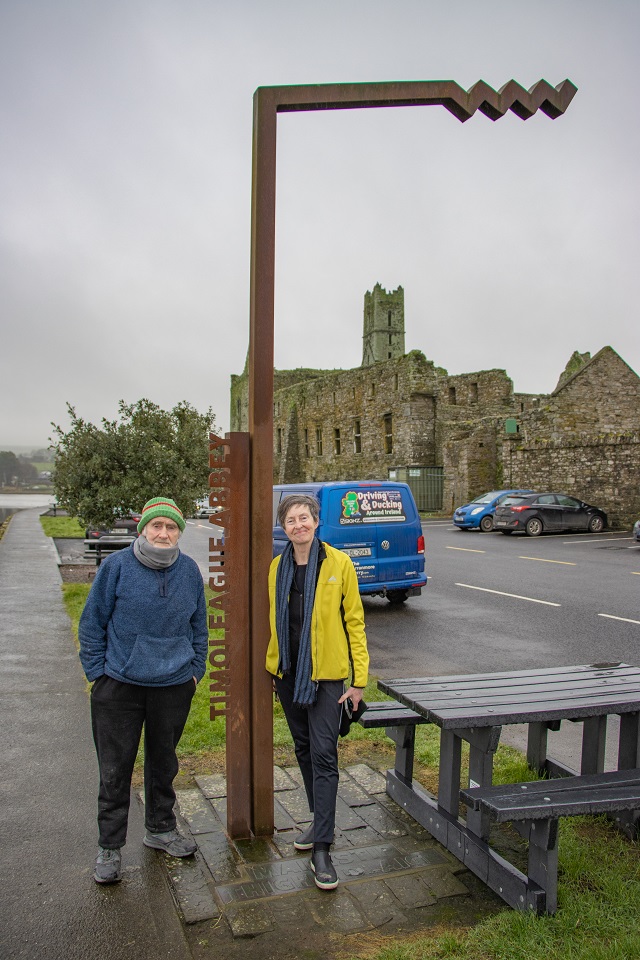 Paddy and Bernadette at Timoleague Abbey

You can donate online at: https://giv.i.ng/wYq8