INSIDE THE EAGLES SECRET LAIR 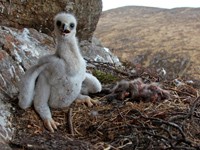 IT’S the hidden compound which is home to Ireland’s most secret wildlife project.

The specially-adapted cages, which are nestled away in the heart of Donegal’s sprawling 17,000 hectare Glenveagh National Park, are home to the latest majestic golden eagle arrivals.

And now for the first time the public has been given access to this remarkable project which is aiming to bring the rare birds back to the skies over Ireland.

donegaldaily.com cannot disclose the location of the compound for fear they will be attacked by vandals or falconers looking to snatch the rare birds.

The compound is the preparation ground for young eagles for weeks before they finally take to the skies – all gathered under license from nests across Scotland.

Project co-ordinator of the Golden Eagles Trust Lorcan O’Toole said it is vital to keep the birds whereabouts a secret until they are released into the wild.

“Some people might think we’re being very cautious but that’s the way it has to be.

“We have to give the birds every chance before we release them into the wild in a few weeks time.

“There is always the chance that somebody might stumble across the release cages or a falconer will go looking for them – we can’t take that chance.

“We do not think of them in monetary terms but these could be very valuable birds for falconers or people who keep birds of prey in captivity,” he said.

The project has been a labour of love for O’Toole and his team since it got the green light under the Millennium celebrations in 2000.

The general theme of the Millennium was regeneration and the Irish Government thought the reintroduction of the eagle, which had disappeared from our skies in 1910, was a thoroughly deserving project.

The first four birds arrived in the north-west in 2001 and since then a steady stream of the rare creatures have been brought to Ireland from the Scottish settings of Skye, Tayside and Lochaber.

The release to date of 54 birds, including the four new eaglets at the hidden compound, has now written the first chapters of this remarkable story.

There is still a long way to go however including the importation of at least another 20 eagles in the coming years.

Funding and support for the inspirational project has been provided by the Department of Environment, Heritage and Local Government and the National Parks and Wildlife Service.

The birds will grow up to weigh 5 kgs and have a wingspan of more than six feet.

By their estimates, the Golden Eagle Trust thinks that at least half the birds are still alive and gracing Irish skies as far away from Donegal as Kerry and even Scotland from where they came.

Others have perished for various reasons but O’Toole is genuinely satisfied about the rate of progress.

“We knew some of the birds would die – that was inevitable. But the overall project is going well. We still have a lot of work to do but the commitment is there and that’s the main thing”.

He is especially happy about the co-operation the project as received from the farming community and the general public.

“Quite simply the project would not have got off the ground without the co-operation of local farmers and the general public.

“There may have been a myth that the eagles prey on lambs but that is simply not the case.

“They may take the very odd sick lamb or chicken but that’s it. On the plus side there is evidence the eagles have helped to thin out the population of Hooded Crows which are a pest in certain areas.

“The farming population have been wonderful and are reporting sightings of the birds regularly.

“As agri-tourism grows, the eagles can become part of that,” he said.

The hard work and commitment of the general public, the farming community and the Golden Eagle Trust finally paid off in May of 2008 when the first Golden Eagle chick in almost a century in Ireland was born.

Alas a very real new threat has now emerged in the form of poisoning.

Indeed the only golden eagle hatched for over a century in Ireland, named Conall, was found dead in Sligo in February this year.

In total 20 birds of prey including Red Kites and Sea Eagles have also perished due to poison.

O’Toole tries to keep his calm when he talks about the illegal poisoning of the birds but you can see in his eyes that he is livid.

“There is simply no excuse for the poisoning of any birds at this stage. Any poisons that are on the market are illegal and should not be used.

“We are fighting an uphill battle because the few farmers who are doing this could have stored these poisons in their sheds for years,” he said.

But overall the signs for more little chicks are very positive for the future with at least four pairs of birds now together.

O’Toole is also left with the task of making the project as appealing to the general public while also ensuring it never becomes too commercialised.

With this in mind there are tentative plans to erect a hidden camera near a nest site which could relay live footage of the eagles next summer.

Another proposal is to attach a satellite to one of the birds so it can be tracked on a daily basis to see its flightpath and where it is going.

“It’s a delicate balancing act. We want the public to be involved in this project as much as possible because it is their project afterall.

“But we must also ensure that we don’t interfere with the natural habitats of the birds,” he said.

The birds are hand-fed venison and other meat by O’Toole using a glove through the wooden walls of the compound to minimalise human contact.

When they are ready to fly the doors of the huge cages will be opened but they will initially return specially-set feeding bins.

After that, like the magnificent birds before them, they will be on their own.

“It’s always a nervous time letting them go but it’s a wonderful sight seeing them soar away on the wing,” he said.

As he stands on the hillside looking down the breathtaking scenery of Glenveagh National Park, you can almost feel O’Toole’s enthusiasm for what he is doing.

“Don’t be fooled, I spend plenty of hours at the computer doing normal stuff as well,” he laughs.

“But yeah, it has its upsides too,” he grins.

INSIDE THE EAGLES SECRET LAIR was last modified: November 29th, 2010 by admin