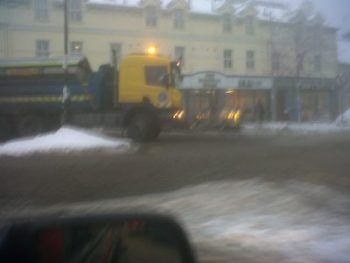 IT’S -17C OUT THERE – ANOTHER HORRENDOUS DAY IN DONEGAL

DONEGAL has seen more record low temperatures overnight as the Big Chill 2 enters a 7th day – with temperatures at -17C, and a huge political row over salt.

Deputy Dinny McGinley has  joined the chorus of discontent aimed at the Government as more salt arrived in the county.

Mr McGinley is furious that most of the salt will get here after the thaw kicks in.

And he said: “Control over salt supplies must be given back to Donegal County Council from the National Roads Authority.

“This crisis cannot be allowed to happen again. It is just ridiculous. We could get salt from Carrickfergus in Co Antrim but instead we have had to wait on shipped imports.”

Council engineer Vincent Lynn said the N56 will now be salted again from today after more salt arrived – but with such low temperatures, roads are still extremely dangerous.

And he praised the hauliers who travelled to Belfast port to pick up the supplies.

The Arctic conditions will eventually subside – but later than was first thought.

Initially forecasters had said the thaw would arrive on Friday. Now they are actually predicting MORE SNOW in Donegal on Christmas Day!

It could be this Sunday St Stephen’s Day before temperatures rise above zero, next Monday before the thaw starts – and next Wednesday before our secondary and back roads are clear of ice and snow.

Met Eireann and the UK Met Office (donegaldaily.com checkes RTE, BBC and ITV forecasts) say a south westerly Atlantic storm will arrive at the weekend, but it will be late into the weekend before Donegal gets the benefit of the warmer temperatures and the thaw.

So we will have the White Christmas that nobody wanted.

But with snow hitting Dublin (it is now the lead story on RTE five days after Donegal got blasted with snow) there are growing fears that salt supplies destined for Donegal will be diverted to the south and east.

We can reveal that Donegal County Council has only a few tonnes of salt left and more should be delivered tonight and tomorrow.

And we’re going to need it – temperatures today will stay around -8C and will drop again this Wednesday night to -15C.

Almost every school in the county is closed today (a separate post on our news section lists them) and will not re-open for two and half weeks.

The people of Donegal however are showing true grit in the face of dreadful weather and appalling management by the authorities of our roads and towns.

Most roads are dangerous. However in Donegal Town, Letterkenny, Buncrana and other towns again today thousands of fed-up residents are taking to the shops to finally do some Christmas shopping.

There is traffic congestion – but delight amongst hard-pressed traders that at last the big Christmas Shop had arrived.

In Letterkenny Dunnes, Tesco and Marks & Spencer reported a lift in trade as many shoppers filled up trolleys with turkeys, sprouts and drinks.

Argos, Menarys, TK Maxx, Evolve, Magees and Tempest were packed with shoppers – and some of the stores have already started sales with up to 50% off many items.

Letterkenny Chamber Chief Executive Toni Forrester said: “The roads were better on Tuesday and there were definitely more people out shopping which is great to see.

“But this can never be allowed to happen again. There has to be an enquiry into how our roads were left in this state for so long. The common factor in all our problems during the cold spell has been our roads.”

IT’S -17C OUT THERE – ANOTHER HORRENDOUS DAY IN DONEGAL was last modified: December 23rd, 2010 by admin