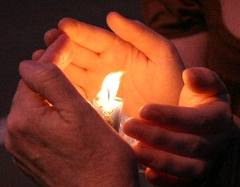 Hundreds of people held candles in the still night sky across the county last night as the bodies of tragic crash victims Roisin Connolly and her unborn baby Catherine were brought to Fanad for burial.

Only days ago Ms Connolly (nee Langan) and her husband Stephen left her mother Kathleen’s home in Ballure in Fanad after enjoying a Christmas break.

The couple, who only married in April, had been looking forward to the birth of their first child in April.

But tragedy struck on their fateful journey to their home in Gracepark Manor, Drumcondra in Dublin when the couple were involved in a multiple car smash around 5pm on Monday afternoon.

Roisin, 39, a teacher at the Educate Together in Balbriggan, initially survived the crash and was rushed to Our Lady of Lourdes Hospital in Drogheda, Co Louth.

However she died a few hours later from her injuries as surgeons undertook the enormous task of trying to save her five month old unborn baby.

Despite their best efforts however, the baby whom the couple had already named Catherine, also failed to survive.

Roisin and her daughter were taken  from Ballybay Funeral Home in Co Monaghan shortly after 1pm to make the long journey north to her mother’s home where she was waked last night.

Roisin’s large wooden coffin dwarfed the tiny white coffin of her daughter in the hearse which was covered in floral tributes to the much-loved teacher.

Her heartbroken husband Stephen, who was driving the Seat Toledo in which Roisin was a front seat passenger when they were involved in the three car smash, was discharged from hospital for the funerals.

Stephen, 32, received numerous injuries and had to have a metal plate inserted into a broken arm.

Last night he followed closely behind the remains of his late wife and child as it meandered its way through the many small towns and villages of Donegal before finally stopping at Roisin’s family home.

Along the way people stood respectfully at many towns and villages including Ramelton, Kerrykeel and Portsalon as a tribute to the loss of one of their own.

The cortege stopped for a while at the Milford Inn Hotel where Roisin’s tragic husband could be seen limping with the aid of a crutch.

The funeral cortege of more than 30 cars shone in the darkness of the Donegal hills and came to a sudden stop outside Roisin’s old school, Doagh Beg National School.

Just before 6pm Roisin and her daughter Catherine finally arrived home at her mother Kathleen’s bungalow home where almost 100 locals waited to greet them.

Roisin’s coffin was carried first into her family home as the tiny white coffin holding the five month old unborn baby she never got the chance to know was carried in behind.

HEART-BREAKING SCENES AS ROISIN AND HER BABY ARRIVE HOME TO FANAD FOR BURIAL was last modified: December 31st, 2010 by admin