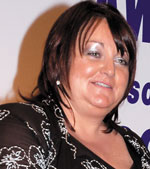 OUR ANN MARIE IS ON TOP OF THE WORLD

PORTNABLAGH woman Ann Marie Ward is on top of the world today after being voted the best OpenWater Swimmer on the planet!

“This is fantastic for Donegal,” said the 44-year-old on the accolade.

“I am honoured, humbled and gobsmacked. It’s a little surreal,” she said, having beaten off Olympic, world, European and marathon competitors.

He said: “The North Irish Channel” is renowned for being the toughest channel swim in the world – cold, rough, filled with jellyfish and fraught with unpredictable weather. But it was site to the tenacious efforts of one Irish women who never quit until she reached the other side.

“Anne Marie Ward, an unlikely endurance heroine, joined one of the most elite and exclusive marathon swimming clubs in the world – the 11 members of the North Irish Channel club. Her never-say-never 18 hour and 59 minute effort – on her fourth attempt – courageously ended in darkness at 3:35 am.

“With both the English Channel and North Channel under her belt, Anne Marie completely reversed her previously unhealthful lifestyle – an inspirational story in itself – and is now one of the world’s most accomplished cold-water channel swimmers. Starting humbly and simply with a 2-mile charity swim, Anne Marie is now deservedly recognized by her peers and honored for reaching the pinnacle of her sport.

“For her amazing swim between Ireland and Scotland her admirable lifestyle turnaround and dedication to charity swims, Anne Marie Ward was selected as the 2010 World Open Water Swimming Woman Of The Year.

The final results of the 2010 vote were as follows:

OUR ANN MARIE IS ON TOP OF THE WORLD was last modified: January 2nd, 2011 by admin