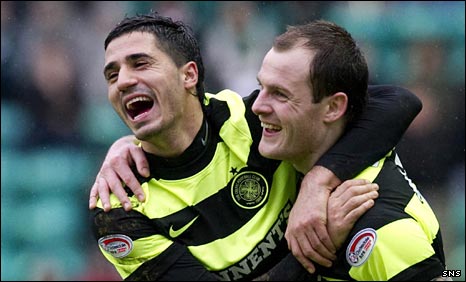 IRISH international Anthony Stokes bagged two goals on his return to former club at Easter Road today in a 3-0 win over Hibernian after a Gary Hooper opener.

However manager Neil Lennon revealed afterwards that he is still looking for another striker.

“We’ve got a few options and hopefully we may have someone, maybe not this week but the week after,” Lennon told BBC Scotland after the 3-0 win.

“But getting Gary back is a huge boost for us, but we do want to add to the striking roster.”

Lennon admitted that strikers Hooper and Stokes had worked well together.

But he said: “You would not have known that in the first 25 minutes. They were second to the ball, but after that they worked very well together.

“It was good to get more than two goals today and that will give them a real shot in the arm.

“You can see what Gary brings to the team. He will probably be disappointed that he did not score the one when Beram Kayal put him through early on.

“He did not let it affect him and took his goal brilliantly.

“Stokesy getting his goals will have done him the world of good.”

Hooper opened the scoring and Stokes added the two others, but Lennon picked out Kayal as the man who sparked Celtic into life at Easter Road.