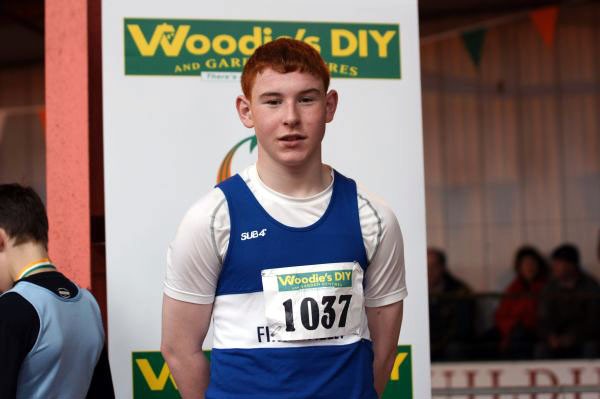 When your discipline is athletics, it can be a long winter with the menu pre-Christmas is simply training – and more training.

Well thats exactly what young John Kelly who in 2010 was out ahead in pretty much everything he encountered in athletics so this week along comes encouragement on the double for not only himself, his club Finn Valley but his family as AAI indicate that he is to receive the outstanding juvenile award for Donegal for 2010.

And he has been selected for the Irish schools team for a competition in Cardiff this weekend.

Said Finn Valley’s Patsy McGonagle: “John sensibly realises that any acheivements to his credit last year do not count when he enters the circle in the year ahead and to his credit has been tireless in his preparation, but it’s still nice to get a timely boost.”

Patsy added: “In Nenagh on Sunday Sinead Mc Laughlin won the national masters long and high jump with clearances of 1.35 in high unlucky at 1.40 while in long a winning 4.49.

She realises she needs to work on her speed but full marks to the Letterkenny girl on this acheivment . Sinead was of course an Irish international athlete some years ago in and around 6m consistently.

The Co Board held their annual awards night Friday at Finn Valley under the stewardship of Neil Martin with Sinead ,John Kelly and Blaithnaid Patton the Valley recipients . Well done to all award winners on the night . Elsewhere the exciting Ballyliffin Coastal Challenge was launched so that is yet another fixture to ponder over in addition to the Spring 5k Series which goes on the road Feb 27th .