DONEGAL TOURISM CAN WALK, GOLF AND SURF ITS WAY TO GROWTH IN 2011

All the local players in Donegal tourism will need to work closely together to ensure that tourism in the North West can recover in 2011. 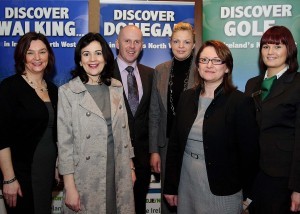 This “Team tourism” approach was the central message of Fáilte Ireland’s Annual Tourism Industry Briefing held in the Mount Errigal Hotel in Letterkenny.

During a series of presentations and a panel discussion, Fáilte Ireland said 2011 would be the year for tourism in the North West to improve with prospects hinging more than ever on the performance of our overseas markets as the home market has effectively peaked.

Reinforcing that belief, citing Fáilte Ireland’s own research, CEO Shaun Quinn pointed out that most tourism enterprises are relatively optimistic regarding their business prospects for 2011, with approximately three in five expecting to maintain or grow their business levels in 2011.

“There are some positive signs in some of our key markets, particularly Europe and the US, and business sentiment about future prospects has improved slightly.

“We have a good quality product, we have better infrastructure and we are better value than before. We know where our target markets are and what needs to be done – particularly the need to grow market share in the UK. 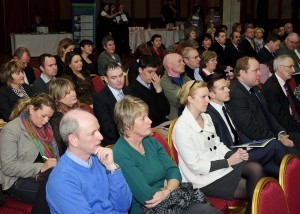 “Tourism has a significant role to play in this county’s economic recovery and it is imperative that as we develop the sector in 2011 that we leave no stone unturned nor potential untapped.

“The local hotel, the B&B owner, the nearby self-catering operator, the activity provider up the road, the local Fáilte Ireland representative, all  the tourism agencies, other local state bodies and community groups all have a vested interest in ensuring that tourism grows in the North West.

Fáilte Ireland is committed to working with all the key players in the region to ensure this happens.”

By way of example, Mr Quinn pointed out that further investment in the northwest tourism sector has continued into 2011 with the recent announcement of funding of €2.7 million for the further development of Sliabh Liag under Fáilte Ireland’s Tourism Capital Infrastructure Programme.

In addition, a total of almost €800,000 is being invested in three iconic projects – Water World in Donegal, Ben Bulben in Sligo and Glencar Waterfall in County Leitrim.

He said- “Tourism businesses walked the tightrope in 2010 – paring back prices and offering good value while ensuring their businesses remained viable.

Many businesses, including those in Donegal, are now expressing concern over access to working capital for the year ahead.

The industry continues to have significant concerns regarding local authority charges and utility costs.

One in three businesses have also cited difficulties due to local competition – particularly in the accommodation sector where there are fears regarding so-called “zombie hotels” driving rates down to levels which may not be sustainable in the long term.

Mr Quinn, drawing on concerns about credit, emphasised – “In an industry which is seasonal, the concerns regarding access to credit are quite serious. 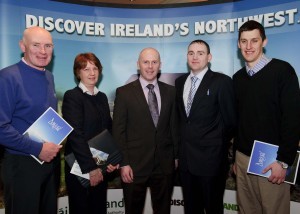 He cited four national areas for investment, all of which will impact on Donegal.

• Driving demand on the home holiday market – through a €4m 40-week intensive marketing campaign using a mixture of innovative marketing and an exciting mix of festivals, events and offers , Fáilte Ireland will continue to leverage all potential demand within the domestic market to create additional tourism activity, revenue and jobs;

• Expanding its business support network (by 50%) to more tourism businesses around the country. In particular, it will invest heavily in those services which will assist tourism businesses to increase their international customer base, with a particular emphasis on the British market.

• Investing through its capital investment programme to improve and broaden the appeal of Ireland’s portfolio of tourist attractions, activities and tourism related infrastructure. Last year, some 23 projects were approved for grant –aid totalling almost €40m and this investment effort will be continued through 2011 to ensure that Ireland is well place to take advantage of longer-term growth.

• Investing in significant business, sporting and cultural events which offer good prospects for tourism growth in 2011. Particular emphasis will be placed on the business meetings and conferencing market where performance has been relatively strong.

Mr Paul McLoone, Head of Operations for Fáilte Ireland in the North West pointed out that despite the economic downturn, the national tourism development authority supported a busy year of tourism activity in 2010 and provided training to hundreds of members of the local industry.

“During 2010, over 1,000 members of the trade in the North West region trained in areas such as Web Check, Web Skills and Marketing on a shoestring.  In addition, local bed and breakfast owners were trained through a B&B development programme, covering areas such as menu development and customer care.

“Fáilte Ireland is placing increased focus on skills development throughout 2011 in order to ensure the North West industry is fully equipped to sustain and grow their business in the current environment.”

A key focus for Donegal in 2011 will be the development of the activity tourism market in particular walking, golfing and surfing.

There has been progress in the walking market through the established Walking Hub that exists in Donegal Town and there is great potential for additional tourism visitors in 2011.

In March, over 40 international golf tour operators, representing the key overseas markets, will visit Donegal on a super familiarisation trip which will provide a unique opportunity for the North West golfing community to showcase all that they have to offer. 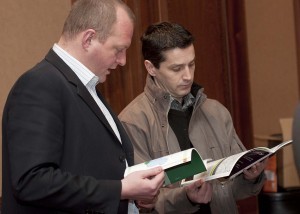 “The staging of the European Surfing Championships will bring with it significant overseas media coverage which will profile Donegal as a premier international surfing destination.

“This is a significant addition to our events calendar and we will be working closely with local industry to ensure that the event is a great success and one that generates as much publicity as possible, not just in Ireland but overseas as well.

“Events will play an integral role in the North West region in 2011 with Donegal Live returning to Dublin and Glasgow in May of this year.”

* ALL PICTURES BY CLIVE WASSON PHOTOGRAPHY

DONEGAL TOURISM CAN WALK, GOLF AND SURF ITS WAY TO GROWTH IN 2011 was last modified: February 15th, 2011 by Stephen Maguire