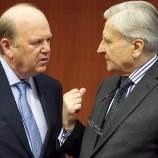 BANKS CRISIS: HUNDREDS OF JOBS TO GO AND BRANCHES TO CLOSE ACROSS DONEGAL

SMALLER bank branches will close, some banks will disappear altogether and up to 300 jobs will be lost in Donegal as a result of the banking crisis, donegaldaily.com has learned.

The Government is to publish crucial stress tests on the Irish banks later today, and the full affects locally will emerge over coming weeks.

Ahead of the publication, trading in Bank of Ireland and AIB has been suspended on the stock market for 24 hours. Shares in Irish Life and Permanent were suspended yesterday until tomorrow morning.

There has been speculation Bank of Ireland could need in the region of €4-5 billion. Building society EBS may need about €1 billion.

It’s thought smaller banks like the EBS will merge with other banks, leaving just Bank of Ireland and AIB left in a few months time.

The final figures will become clear at 4.30pm.

Today a senior bank manager at one Donegal branch told donegaldaily.com: “It is now clear that only Bank of Ireland and AIB will exist after this process is complete.

“We expect the smaller banks to be subsumed within the two larger banks, but there will also be major jobs losses and many smaller branches will just cease to exist.

“I believe that at least 300 jobs will go in Donegal as a result of this process. It is a guestimate, but there could be many more losses.

“People who have shunned online banking until now may have no choice very soon.”

Both the ECB and the Commission are expected to issue separate statements some time after the results have been released this evening.

The figures will be a major test of the new coalition Government with Minister for Finance Michael Noonan under pressure to come up with a rescue plan that doesn’t bankrupt the nation.

BANKS CRISIS: HUNDREDS OF JOBS TO GO AND BRANCHES TO CLOSE ACROSS DONEGAL was last modified: March 31st, 2011 by admin