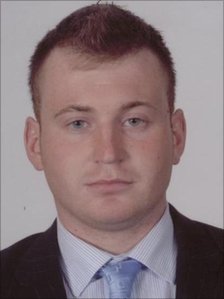 GARDAI ARE helping the PSNI investigate the murder of Constable Ronan Kerr in Omagh on Saturday, it has been revealed.

And one national newspaper is today quoting republicans in Omagh as blaming dissidents in Donegal and Tyrone for the outrage.

We understand the Government has promised all resources to anti-terror detectives in Donegal to help track down 25-year-old Mr Kerr’s killers.

He died when a Semtex bomb exploded under his car in the Tyrone town. There has been widespread condemnation of the attack.

A security source in Donegal told us last night: “There is some intelligence to suggest that this was a cross-Border operation by the dissidents and we are helping the PSNI in any way we can.”

The Irish Times meanwhile are quoting sources in Omagh who believe the dissidents living in Donegal and Strabane may have played a part in the attack.

The paper reported: “Local republicans believe the bombers did not come from the town itself where there is little or no support for dissident groups.

“Instead they suggest an attack may have been mounted by dissidents based in the Strabane area of Tyrone and across the Border in Donegal.”

The murder of Constable Kerr continues to cause revulsion throughout Ireland and around the world.

More than 16,000 people have joined the condemnation on Facebook.

The murdered officer’s remains were escorted to his mother’s home in Beragh last night by both police officers and members of the local GAA club.

Last night Cardinal Sean Brady, said the attack on a Constable Kerr was an attack on all of society.

He told BBC Radio Ulster: “I call on young Catholics to actively support the PSNI and join it. We need a police force that represents all of us.

“I also appeal to the parents of children that are being recruited by these groups to get their children to resist.

“They have not lived through the dark days of the Troubles, tell them the awfulness of what we lived through.”

The club’s chairman Gearóid Ó Treasaigh said the young officer’s decision to join the police had the support of his team mates.

He went on: “Ronan Kerr was a Catholic, an Irishman and a Gael who joined the PSNI because he wanted to play his part in making our society a better place.

“Many members of our club were aware of Ronan’s career path and supported him on his choice.

“We also send a strong message today to all of those people who continue to engage in this activity – you have no support in our community and your actions do not represent the views and feelings of the vast majority of people in Ireland.”

Anyone who can help catch the killers should contact their local Garda Station or call the PSNI incident room directly on 048 82 256659.