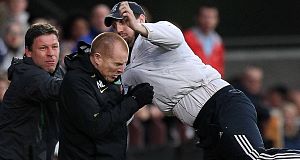 A man has appeared in court in connection with an attack on Celtic’s Neil Lennon during his team’s match against Hearts – and two more men will appear in court tomorrow charged with sending bombs to the Irishman.

John Clark Wilson, 26, has been charged with breach of the peace and assault, both aggravated by religious prejudice.

He made no plea or declaration and was remanded in custody during the private hearing at Edinburgh Sheriff Court.

The Hoops boss was attacked on the touchline after his club’s second goal at Tynecastle. A fan clambered from the Hearts section of the main stand and made for Lennon.

He connected with Lennon before being bundled to the ground and arrested. Lennon looked stunned after the attack but was uninjured.

In a separate development, two men who had been detained by police investigating parcel bombs sent to Lennon, will appear at Kilmarnock court on Friday on bomb charges.

They were arrested in Ayrshire on Thursday morning – hours before a bullet was found in the post at Celtic Park today, addressed to Neil.

A total of three parcel bombs addressed to Neil Lennon have now been intercepted in the west of Scotland. Lennon and his family are living amid tight security which includes a panic button in their house.