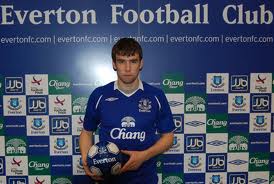 The 22-year-old Donegal man will make an incredible 40th appearance of the season when his side entertain Chelsea at Goodison Park on Sunday.

He has started 30 of those games – and scored six goals for his club.

Manager David Moyes said “Seamus did tremendously well at Blackpool last season and he’s given us something fresh and new this year.

“He’s been great and, with what we’ve seen, we hope he’ll be able to step up again.”

The former St Catherine’s and Sligo Rovers player won’t end his season against Chelsea however.

He is expected to feature for Ireland when they play the North in the Carling Nations Cup next Tuesday – and Scotland on Sunday week.

Said Seamus after the ceremony: “I’m trying to pick up different things but I don’t want to lose that natural ability.

“I just like being able to get it and go. It’s done me well so far, so hopefully that can continue to be the case. I haven’t had a whole load of coaching. I just go for it. I want to get past my full-back. If I don’t do it the first time, I’ll keep trying.

“It’s still there a little bit, that feeling that it’s all a bit surreal. I’ve said to myself that I’ve got to get rid of that because you can’t always think that way. At the same time, I don’t want to get used to it. I still want to have that little feeling of being in awe because you can never take your place for granted.”

COLEMAN NAMED EVERTON YOUNG PLAYER OF THE YEAR was last modified: May 20th, 2011 by admin