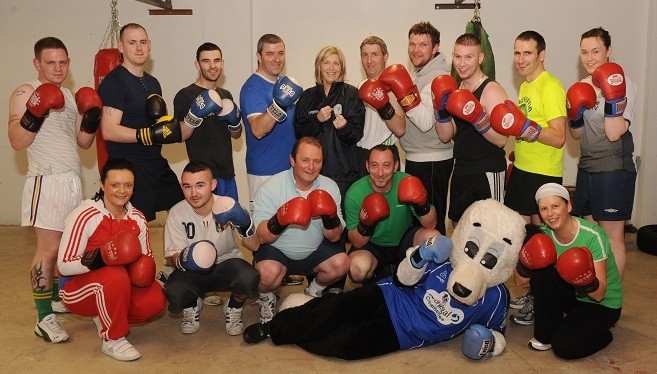 Seconds out! There will be blood, sweat and tears in the Villa Rose Hotel, Ballybofey on Saturday July 2nd when Finn Harps supporters switch sports to star in the “Thrilla in Da Villa” White Collar Boxing Night to raise money for the club.

The action packed evening will include a series of 10 bouts with both male and female participants getting ready to rumble and lace up their gloves for 3 1-minute rounds.

Event Manager Sharon Scanlon is sure those attending will have a great night out.

“This is the first White Collar Boxing Night in the Twin Towns so we have made every effort to ensure everyone enjoys an evening full of entertainment.

We are adding all the ingredients which will give the event a real sense of occasion.

Oisin Kelly will be MC for the night while DJ Gamble will play the music each boxer has chosen to be his/her signature tune for their contest.

We also have the one and only Mad Marcus performing in the interval so its promises to be a knockout night!” she said

But how are the gallant volunteers faring with the rigorous training regime?

Very well, according to Sharon. “Anyone who has participated in White Collar Boxing will tell you it’s anything but easy but everyone has risen to the challenge. The dedication and commitment of the boxers has been fantastic. They are a great bunch of people and on the 2nd of July I think everyone is going to be amazed at the lean mean fighting machines on display!” she added