An ‘Aladdin’s Cave’ of stolen goods including a full-fitted kitchen has been found by Gardai in Letterkenny. 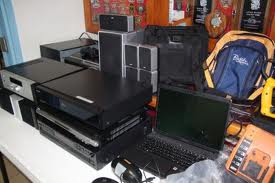 The goods were found when Gardai searched a house in the Meadowbank area of the town during an operation involving armed gardaí from the Regional Support Unit, local detectives and uniformed gardaí.

Two local youths have been questioned and a file is being prepared for the Director of Public Prosecutions.

There have been 28 burglaries in the Letterkenny area over the past month.

The items also included an assortment of power tools.

The thieves used tools to remove the fully-fitted kitchen from an unoccupied house.

Supt Vincent O’Brien revealed how Gardai had to hire a truck to remove the stolen goods.

“There was a considerable amount of property recovered which included washing machines and even a fitted kitchen.

“We did have to hire a truck because of the volume of goods recovered,” he said.

He advised all homeowners to be vigilant and lock all doors and windows and install burglar alarms, security lights or cameras if possible.

Crime Liaison officer Sgt Paul Wallace has now arranged a meeting with local residents to discuss the burglaries and to possibly return any stolen property.