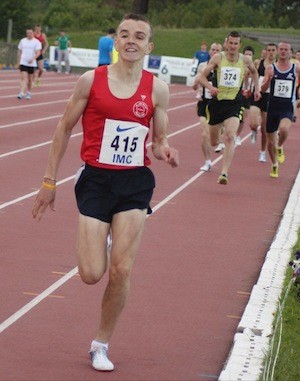 BY EAMON HARVEY: Donegal athletes recorded a number of  outstanding performances at Tullamore over the weekend when the All Irelands Part 1 were held in ideal conditions.

Tir Chonaills Karl Griffin, smashed a thirty years old record when winning the U17 800m impressively in a time of 1min52.72secs. The Donegal Town lad who heads for the European Youth Olympics in Turkey next week, two days earlier at the Clonliffe Harriers 125 years celebration meet in Santry ran 1min50.97secs in winning the B mens 800m. This is the fastest 2011 time in Europe by a 16 yr old. Cubmate Kate McGowan skimmed over the U15  80m Hurdles to lower a ten year old record -time 11.54secs and later on Saturday was most impressive when recording 5.50m for victory in then Long Jump. Letterkenny’s,Mark English, heads for the European JuniorU20 c/ships in Tallen this morning. On Sunday he steped down a distance and recorded 48.02secs for victory in the 400m – a new Co Donegal record for the distance and 0.2secs short of 400m qualification for the European Junior. innishowen AC coach Paddy Cox introduced Javelin throwing into his club one year ago. On Sunday his son Fergus threw over 37metres for an impressive victory in the U13 age group

Outside Ireland Ruairi Finnigan,Letterkenny, at he World Youth U18 c/ships in Lille battled his way to the final of the 1,500m and in a most competitive climax on Sunday evening recorded a sub 3mins 50 secs time for a top ten placing. The Lettrkenny lad heads for the European Youth Olympics in Turkey ranked in the top ten in the world, next Monday morning, accompanied by Tir Chonail mate Karl Griffin under the managership of Bernie Alcorn, Finn Valley. Bernie incidentally, has just returned from the WYG in Lille where she had the support of Tir Chonaill Coach Eamon Harvey.

Letterkenny’s Mark English departs today for the European Junior U20 c/ships in Tailinn while Daren McBrearty towards the end of the week is part of a twenty person Irish team. The Juniorand U23 teams are managed byexperienced  Donegal managers Neil Martin and Teresa McDaid 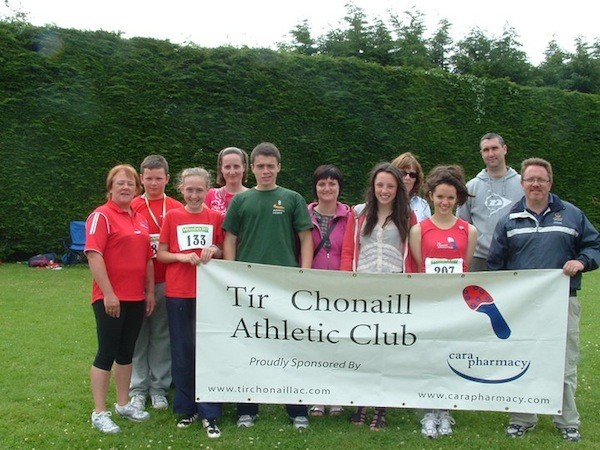