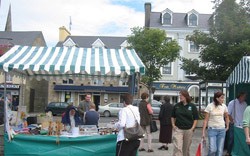 DONEGAL Town council is set to axe the town’s famous farmers market in a row over ‘foreign’ goods.

Businesses in the town claim produce other than that grown locally is being sold at some stalls – and is therefore in breach of the spirit of the market.

Council officials are set to act on the complaints, donegaldaily has learned.

And if produce other than that grown locally – or which competes against rate-paying established businesses – stall owners could be removed or the entire market closed down.

A council source told us: “It is now clear that the original farmers market idea has been expanded to goods which go against the spirit of what the market should be.

“Inspections will be carried out and orders issued against any stalls in breach of the market’s original plan.”

The council held a private meeting yesterday and have agreed with the complaint made by a local businessman.

The farmers market in the Diamond is due to go ahead tomorrow but council officials will be there to monitor what is being sold.

The Mayor of Donegal Town Tom Connaghan says that in his opinion the current market “is not a real farmers market.”