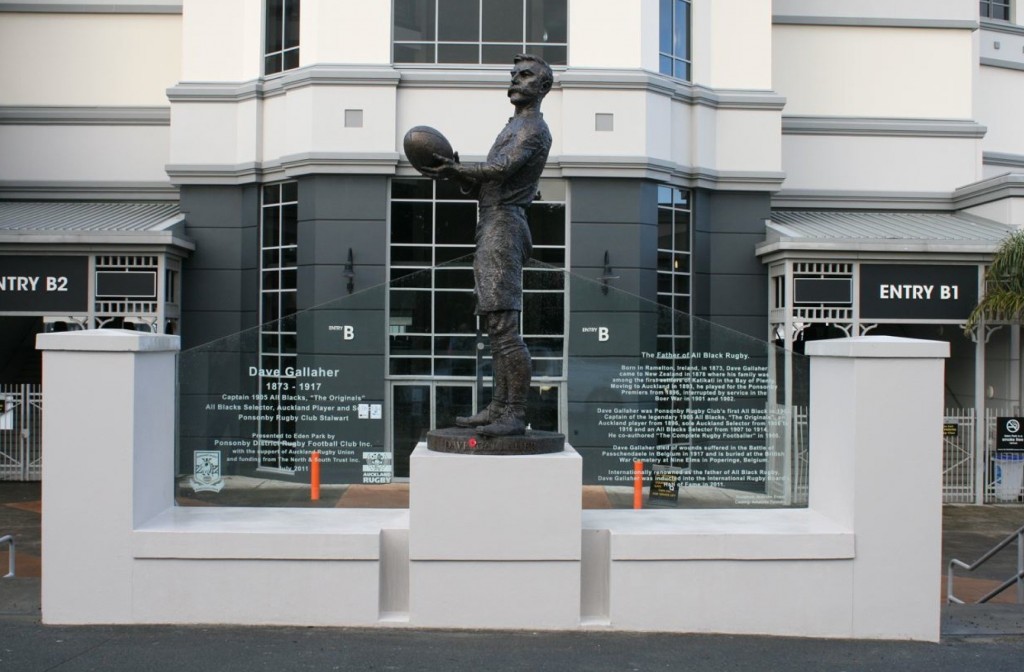 A Donegal man is to literally watch over rugby’s World Cup Final in New Zealand.

The New Zealand rugby authorities last week erected an imposing 2.7 metre statute of Ramelton-born David Gallaher on a concrete plinth outside the Auckland stadium that will host the event’s opening and closing ceremonies.

The sportsman, whose imposing likeness was unveiled at Eden Park on Friday last (15th July), emigrated to New Zealand as a five-year-old along with his entire family in 1878 form the tiny village of Ramelton.

Gallaher is considered to be one the most important figures in the history of the game.

The unveiling of his memorial coincided with an announcement by the International Rugby Board that the Donegal man has been inducted into the sport’s Hall of Fame. Just thirty figures in the history of world rugby have been accorded the accolade.

David Gallaher, known as Dave, is revered in New Zealand as the captain of ‘The Originals’, the first All Blacks rugby team.

He led the side on a groundbreaking tour of Britain, Ireland and France in 1905 which resulted in 34 wins in 35 matches.

The team’s performance turned world rugby on its head, established more than a century of All Blacks dominance of the sport and made rugby the national game of New Zealand.

Gallaher died four weeks short of his 44th birthday in 1917 fighting with a New Zealand regiment in the First World War and is buried in France.

The Gallaher Shield, Auckland’s primary club tournament, is named in his honour whilst in 2000 the Dave Gallaher Trophy was inaugurated for international tests between New Zealand and France.

The statue at Eden Park was erected by Gallaher’s local rugby club in Auckland, Ponsonby. The club’s Director of Rugby Bryan Williams is also President of the New Zealand Rugby Union.

Speaking at the unveiling, Mr Williams paid tribute to the pioneering role of Letterkenny Rugby Club and their efforts to commemorate Gallaher’s life and achievements.

He said he was delighted that close links had been established between Ponsonby and Letterkenny RFC, which have resulted in a number of player exchanges between County Donegal and New Zealand since the events of 2005.

Letterkenny Rugby Club Chairman, Mr Mark Bundschu, said everyone from Ireland should be proud of the tributes that continued to be paid to Donegal-born Dave Gallaher.

“Rugby is a truly global game and 4 billion people will watch the World Cup Finals in New Zealand, which will start and conclude under the gaze of Gallaher’s statue. It is astonishing and humbling to see the influence that a locally-born man has had on the sport.

“It’s not just that his likeness will now be seen by those attending the opening ceremony and the final. It’s the fact that his name is revered in New Zealand, in France, and since the All Backs visit to Donegal in 2005, also in Ireland. When one considers that just 30 players have been entered into the IRB Hall of Fame – and one of them is from County Donegal – it’s clear to see that this county has forever been linked to the very heart of the game of rugby.”

In his accompanying speech, the former All Black coach spoke movingly about Dave Gallaher’s Donegal roots and the great courage the pioneer family had displayed when faced by hardship on their arrival in the wild New Zealand outback more than a century ago.

“Captain Cook had named the area they arrived in ‘the Bay of Plenty’. It was anything but!” he added. Sir Fred noted that it was in order to support his family after the death of his teacher mother that the teenage Dave Gallaher moved to Auckland to work and started playing the game that would take him to worldwide fame.

The man responsible for Gallaher’s likeness is sculptor Malcolm Evans, who details Gallaher’s links to Letterkenny Rugby Club and Ramelton on the www.gallaher.co.nz website he created to help publicise the statue. He revealed that a limited number of smaller replica bronzes of the famous rugby player would also be created. “At this stage, we are taking enquiries and anyone interested can visit the website and register their interest. It certainly would be nice to see one of these make its way back to the land of his birth,” he added.