GLENSWILLY AND ST.MICHAELS TO MEET IN SENIOR CHAMPIONSHIP FINAL

Donegal will have new senior GAA champions in a few weeks time when Glenswilly square up to St.Michaels after both sides won their respective semi-finals. 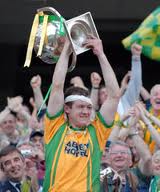 Many people’s top for the championship St.Michael’s overcame the challenge of Glenfin.

Both side will meet in three weeks time at McCumhaill Park in Ballybofey to see who will be crowned senior champions for 2011.