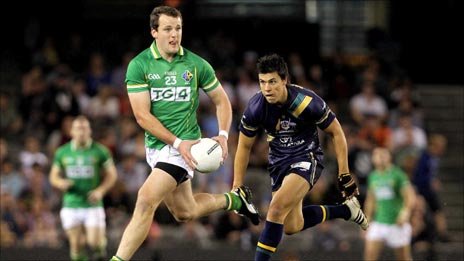 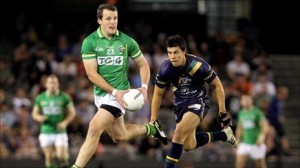 Ireland thrashed Australia in the first of the two International Rules Tests between the sides in Melbourne – with Donegal captain Michael Murphy the star of the show!

Our side were always on top and Murphy scored a goal to help his side to a 22-4 lead after the first quarter.

Eamonn Callaghan found the net during the second period, after which Anthony Tohill’s side led 44-20.

The score was 59-29 after the third period and Leighton Glynn and Stephen McDonnell scored goals in the fourth.

The first score of the game came from a Tommy Walsh over from 25 metres out.

Murphy then lashed the ball into the bottom left-hand corner of the net for the first goal of the game three minutes before the end of the first segment of play.

Stephen McDonnell’s over completed the scoring for the first quarter.

Down’s Kevin McKernan began the second quarter in style with a behind and an over.

Nine minutes into the period, Callaghan took a few steps and then lobbed the ball into the empty net.

McDonnell added two more overs to his tally during the second quarter while Brad Green gave Australia some hope by scoring a goal.

Green fired into the empty net after Stephen Cluxton had miscued a shot.

The third period was goalless but Walsh added his third over of the day, while Kieran Donaghy, Glynn and McKernan contributed similar scores.

Glynn smashed a fierce left-foot effort into the top left-hand corner of the net early in the fourth quarter and Donaghy kicked an over soon after.

McDonnell found the net from an acute angle and the Armagh man then contributed another over.

Australia rallied with some consolation scores but Murphy popped the ball over the bar for the last score of the tie.

The second Test will be held in Queensland on Friday 4 November.