BATTEN DOWN THE HATCHES – DONEGAL TO BE HIT WITH SLEET, SNOW AND 110KPH WINDS

A severe weather warning has been issued for Donegal for the next few days with forecasts for heavy rain, sleet, snow and winds of up to 110kph. 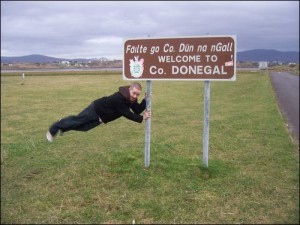 The warnings come as the first real taste of winter bites in Co Donegal.

This afternoon we have had reports of heavy sleet in Falcarragh, Downings, Kilmacrennan and Termon.

And according to Met Eireann and BBC forecasters much more is to follow in the next few days.

Worried islanders on Tory, afraid of being cut off from the mainland, had supplies flown out to them this morning.

Vital supplies including foodstuffs such as milk and bread as well as fuel was taken onto the island by the rescue helicopter based at Sligo.

With heavy seas and strong winds forecast, it is feared that boats will not be able to access the island for a number of days.

“It will get a lot colder and windier in the coming hours across the North West.

“We still do not know how cold it will get just yet but temperatures are already plunging.

“We are expecting very strong winds of up to 110 KPH and more rain.

“Temperatures are getting much colder and because of that there is a strong possibility of snow in places.

“We have already had reports of sleet in many places across Donegal and that looks likely to continue,” said the spokesman.

Many roads around Termon and Kilmacrennan are reported to be white with heavy sleet this afternoon which could turn to snow this evening.

Donegal County Council is currently on standby and may be forced to send out gritters if the temperatures continue to plummet.

BATTEN DOWN THE HATCHES – DONEGAL TO BE HIT WITH SLEET, SNOW AND 110KPH WINDS was last modified: November 29th, 2011 by Stephen Maguire
Facebook0Tweet0LinkedIn0Print0
Tags:
donegalMet Eireannsleetsnowstorm