RNLI IN DONEGAL LAUNCH 87 TIMES FROM THREE STATIONS IN 2011

The RNLI had yet another busy year in Co Donegal with 87 launches from the county’s three different stations. 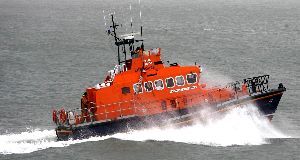 A total of 84 people were assisted with Lough Swilly being the busiest Donegal station with 41 launches and 18 people being assisted.

Across the country, the RNLI had more than 1000 calls and rescued 905 people.

The busiest months for the RNLI nationally were July and August with 155 launches.