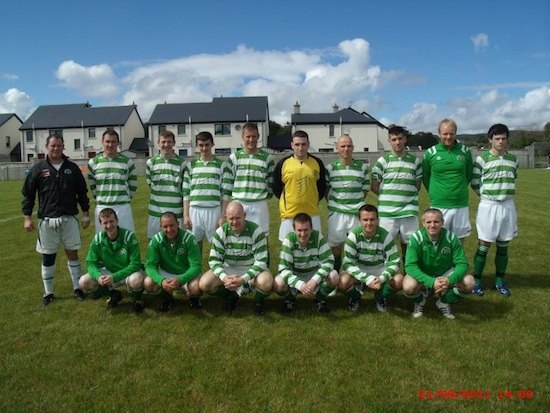 Rathmullan Celtic ensured a second successive promotion and the return of Premier Division football to the Seaside with a seven-goal demolition job in Convoy on Sunday.
The win, coupled with Cappry’s home reversal, ensures Rathmullan of an automatic promotion place and also puts Dessie McLaughlin and Mark Curran’s team one step closer to an historic Division One title.

With four games left to play, RCFC know now that four more points will secure a back to league titles and write the names of all involved into the fabric of footballing folklore in the town. A mark of the shift in attitude within the club under the current regime was the lack of any celebration over the promotion. For the management and players, this milestone achieves just one of the goals they hope to achieve and nobody is willing to lose focus with the big prize now in sight.

With all that said, Sunday’s performance was befitting of the occasion, as the team recorded their most convincing win of the campaign to date.

The front pairing of Dara Patton and Eamon Sheridan have been pivotal to the success of Rathmullan over the past 18 months, and Sunday proved to be no different.
Leading scorer Patton turned provider for the opening goal, as his curling right wing cross was nodded home by the head of Sheridan inside 10 minutes for the perfect start.
Rathmullan soon doubled the lead, and the marauding Patton was again the provider. He skipped past three challenges down the left flank this time and crossed to the far post where Ryan Connolly was on hand to side foot home his first goal for the club.

With Rathmullan in the ascendancy, Convoy inexplicably ended the game as a contest with a defensive suicide. With home team claiming a ball down the left wing had crossed the line, the referee waved play on and Dara Patton’s cross found a defender reaching for the ball and taking the law into his own hands. Literally. The referee had no choice but award a spot kick and Eoin Sheridan clinically dispatched it from the spot. 0-3 at half time.

Rathmullan’s fourth arrived before the hour and was a real treat and easily the goal of the game. A breaking ball was seized by Ryan Connolly 20-yards from goal and he hammered the ball high into the top corner to double his tally. The young winger soon completed his hat trick from the penalty spot after Dara was once upended in the box and regular spot kick specialist Eoin Sheridan admirably stepped aside to let Connolly take his treble.
Rathmullan soon replaced Connolly and the returning Barney Patton at right back, as David Edwards and Sean McGregor were thrown in to keep the tempo up. That’s called strength in depth folks.

The lively Edwards soon had his full back in all sorts of bother down the left hand side and chances were coming thick and fast for the front men. Rumours of Dara and Eamon not talking to one another at this point can only be denied, as Eamon eventually set up his partner for the sixth goal of the game and all was well again with love’s young striking dream partnership!

The final change of the day saw Pauric Morrison come on to provide a useful cameo and he was soon involved in some fine interlinking play as Dara Patton put another lace into the Golden Boot with his second of the game and Rathmullan’s seventh on the day.

A superb performance from the Celts from front to back on another impressive day for the club. Dennis Sheridan rarely looked troubled in goals yet dealt admirably with any crosses coming his way and even managed to return the odd pass back to a green jersey! The back-four were once again marshaled by the cool calm and collected Chippy Barrett and the best we can say for him is that he filled the void left by suspended Paddy Sheridan seamlessly. Seanie Barrett excelled for the second game running, while full backs Regi Miller and Barney Patton pushed forward at will against a limited Convoy side.

Eoin Sheridan relocated to the left of midfield and gave his usual all actions display, while Aaron McClafferty and Seamus McLaughlin would have found more stress sipping pints in Mary’s of Glen than they did in the middle of the park yesterday. Up top, the love/hate chemistry that permeates the relationship between our front two Dara and Eamon once more lit the blue touch paper en-route to another performance from both that oozed class. Unlike Sherringham and Cole however, these two have far much to say to each other off the pitch!!

Without doubt this week’s star performance and MOTM champers goes to Ryan Connolly. A hat trick to go along with a bag of tricks down the right wing, this was one stocking filler the management didn’t see coming at Christmas time.

The bandwagon rolls into Cappry next Sunday looking for a positive result that would set up a title decider when the Killybegs outfit St Catherine’s visit a Seaside with a view on Sunday March 25th.

One big push needed from everyone concerned….history beckons.