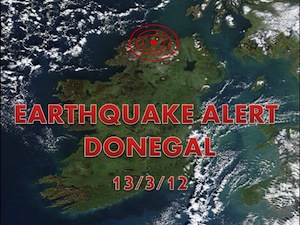 HAS DONEGAL BEEN ROCKED BY ANOTHER EARTHQUAKE?

THE KERRYKEEL area has been rocked by “a loud bang” tonight.

However the British Geological Survey, which monitors tremors in Co Donegal, has not recorded anything in that area.

Amateur weatherman Kenneth McDonagh told us: “People have reported to my Donegal weather channel tonight that they have felt yet again another ground tremor similar to one earlier this year.

“People from the Kerrykeel area have contacted me to say there was a loud bang and some people felt their houses shake in that area around 9.20pm this evening.”

A number of readers have contacted donegaldaily.com in the past few hours to report hearing a very loud bang, with reports from Rathmullan, Portsalon and the surrounding areas.

One reader told us: “It sounded like thunder but it is a really calm night and I thought it could be another tremor.

“It only lasted a few seconds, but my house did shake.”

Amateur weatherman Kenneth has ruled out thunder as a cause of the loud bang.

However the British Geological Survey, which monitors tremors, updated its website  and is not reporting a tremor in Co Donegal.