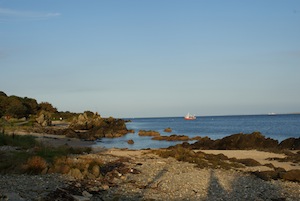 DONEGAL County Council is under fire today after officials insisted on BANNING elected councillors from discussing a Compulsory Purchase Order in Inishowen.

Last week donegaldaily.com revealed that civil servants at the council had ordered councillors not to discuss their plans to take over land owned by Dan McGuinness at Carnagarve so that a waste pipe from a controversial sewage plant at Moville can be laid there.

Sinn Fein councillor Jack Murray, who has been working on behalf of residents in the area, found that he couldn’t raise the issue at an electoral area meeting this week.

He has vowed to continue to work on their behalf.

The issue of the Water Waste Treatment Plant in the area is before the High Court under judicial review.

However the separate council application for the Compulsory Purchase Order is not part of that case and Mr McGuinness believes it could have been discussed.

He has even taken legal advice which, he says, confirms the matter was not sub judice – or prejudicial to the High Court case.

The campaigner is now asking Donegal County Council to publish the legal advice it was given in the matter.

“If the council has received legal advice giving reasons for their statement then the public has an absolute right to see it,” he said.

“This advice had already been requested last week so there was no comprehensible reason why it could not have been produced.”

Cllr Murray says he will continue to work on behalf of residents.

“Very serious and legitimate concerns were raised with me by residents who live in the Carnagarve area,” he told us.

“As a result of legal advice which the council had received, I was unable to raise these concerns in the public arena of the Inishowen Electoral Area Committee. I did however, raise the issue ‘in committee’.

“While I am frustrated that I could not raise this issue in the presence of the media and the public, I will continue to work on behalf of these constituents as the issue has not yet been dealt with satisfactorily.”

The legal battle over the council proposals have been ongoing for several years now.

However a more serious legal argument may lie ahead as the UK – represented by the Crown Estate – claim ownership of the whole of Lough Foyle, even up to the high water mark on the Donegal side.

It’s not clear as yet if the council has sought permission to put a waste water pipe onto land and seabed claimed by the UK.